As an introduction to a new language, uTalk is unrivaled. The app provides an immersive and effective experience that is perfect for those looking to travel or communicate with others in a foreign language.

The uTalk platform is simple to use and provides a wealth of content for users to explore. The app offers courses in over 150 languages, from popular options like Spanish and French to more niche choices like Assamese and Manx. 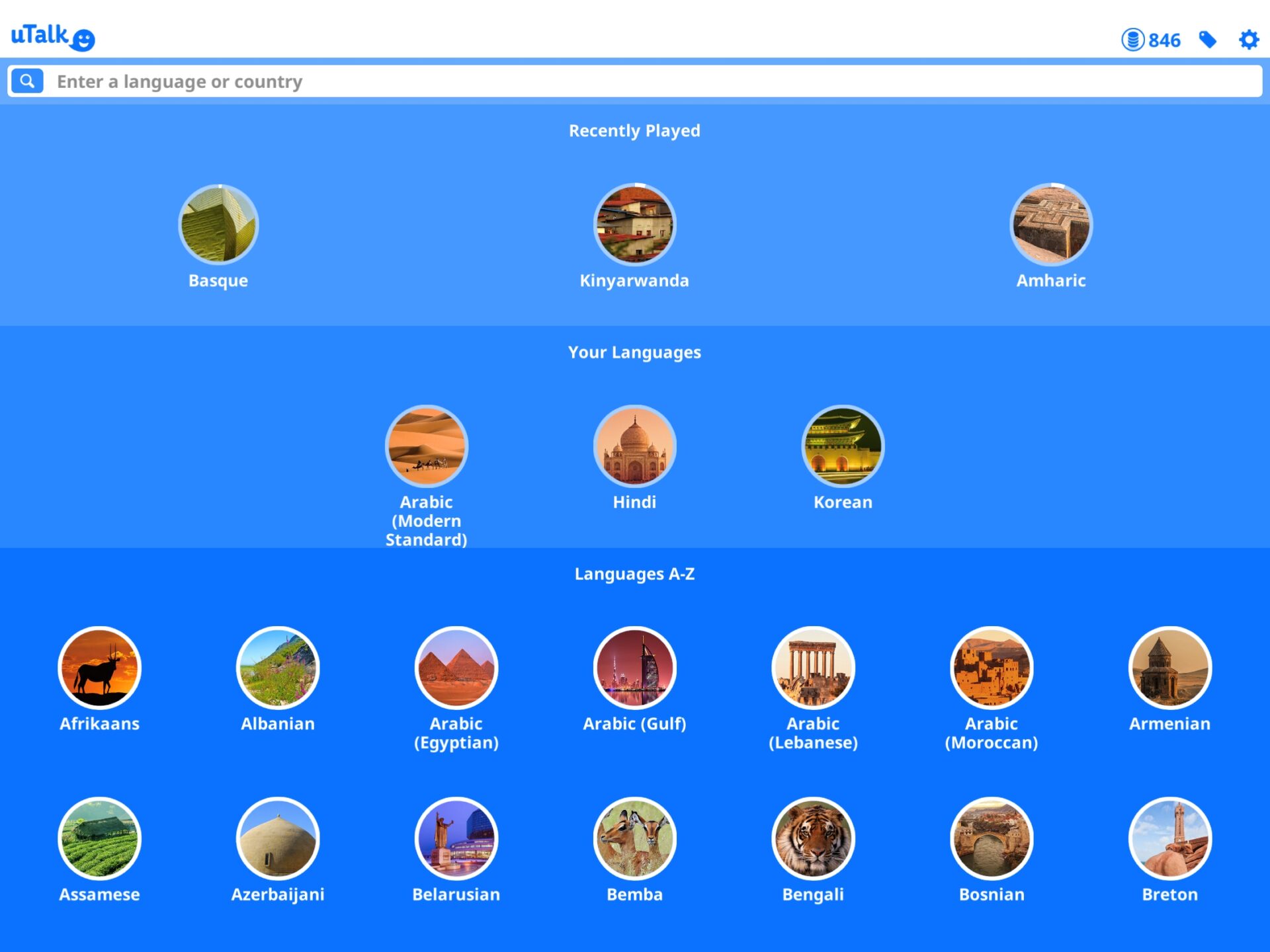 Assuming that you have no prior knowledge of the language you’re trying to learn, uTalk will introduce you to the fundamental words and phrases you’ll need to get by in conversation. It does so using a series of fun and interactive games that make learning feel more like play than work.

Each word or phrase is accompanied by a memorable picture and native speaker audio (both male and female versions), and there’s the ability to slow down the audio to aid with comprehension.

You’ll have learned over 2000 words across 60+ different topics by the end of the uTalk course. These topics include essential vocabulary for travel, business, and everyday life.

How does uTalk work? 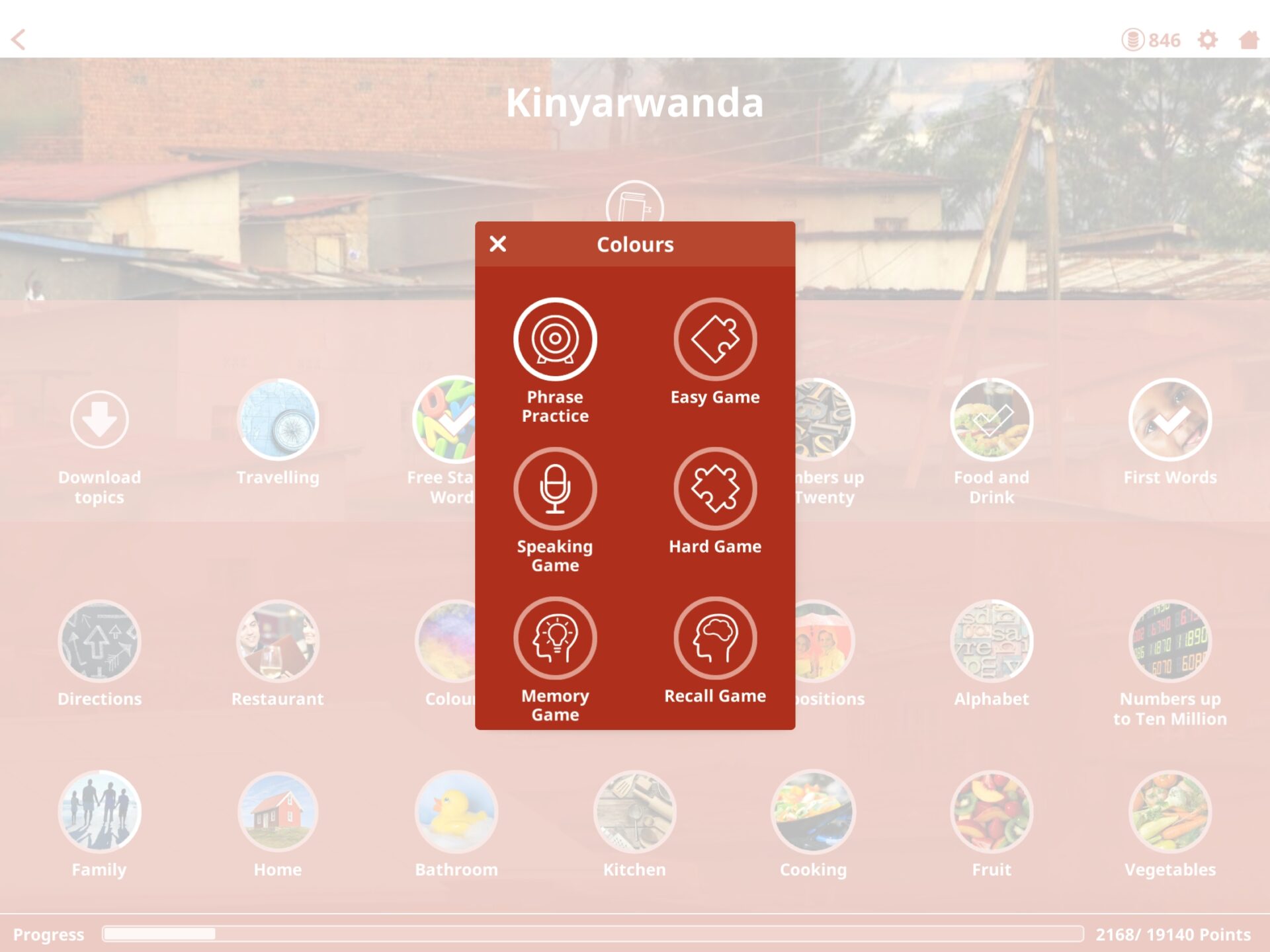 uTalk uses a gamified approach to language learning that makes it both fun and effective. The app is designed around a series of challenges and rewards that keep users engaged and motivated to progress.

There are 5 distinct games to play in each topic, plus a Phrase Practice section. We’ll break these down below so you know what to expect. 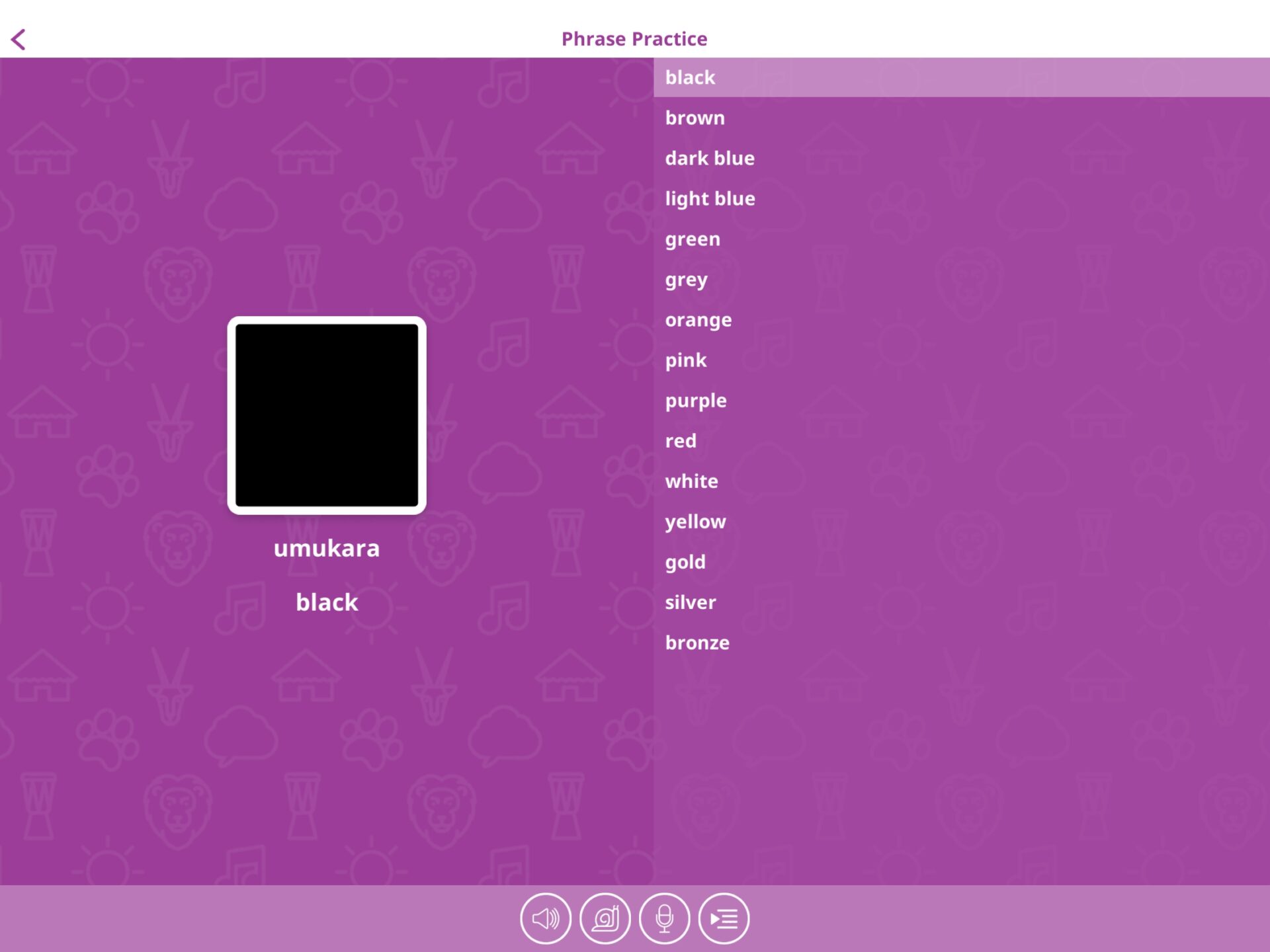 This section introduces you to all the words you’ll encounter on the topic. Here you’ll listen to how the words are pronounced, see how they’re spelled, and memorize the pictures associated with them.

There’s an option to record yourself saying the words, then compare them to the native speaker’s audio. By clicking on the speaker icon you’ll hear the word pronounced again, this time in the opposite gender’s voice. The snail icon lets you slow down the audio so you can hear each sound more clearly. 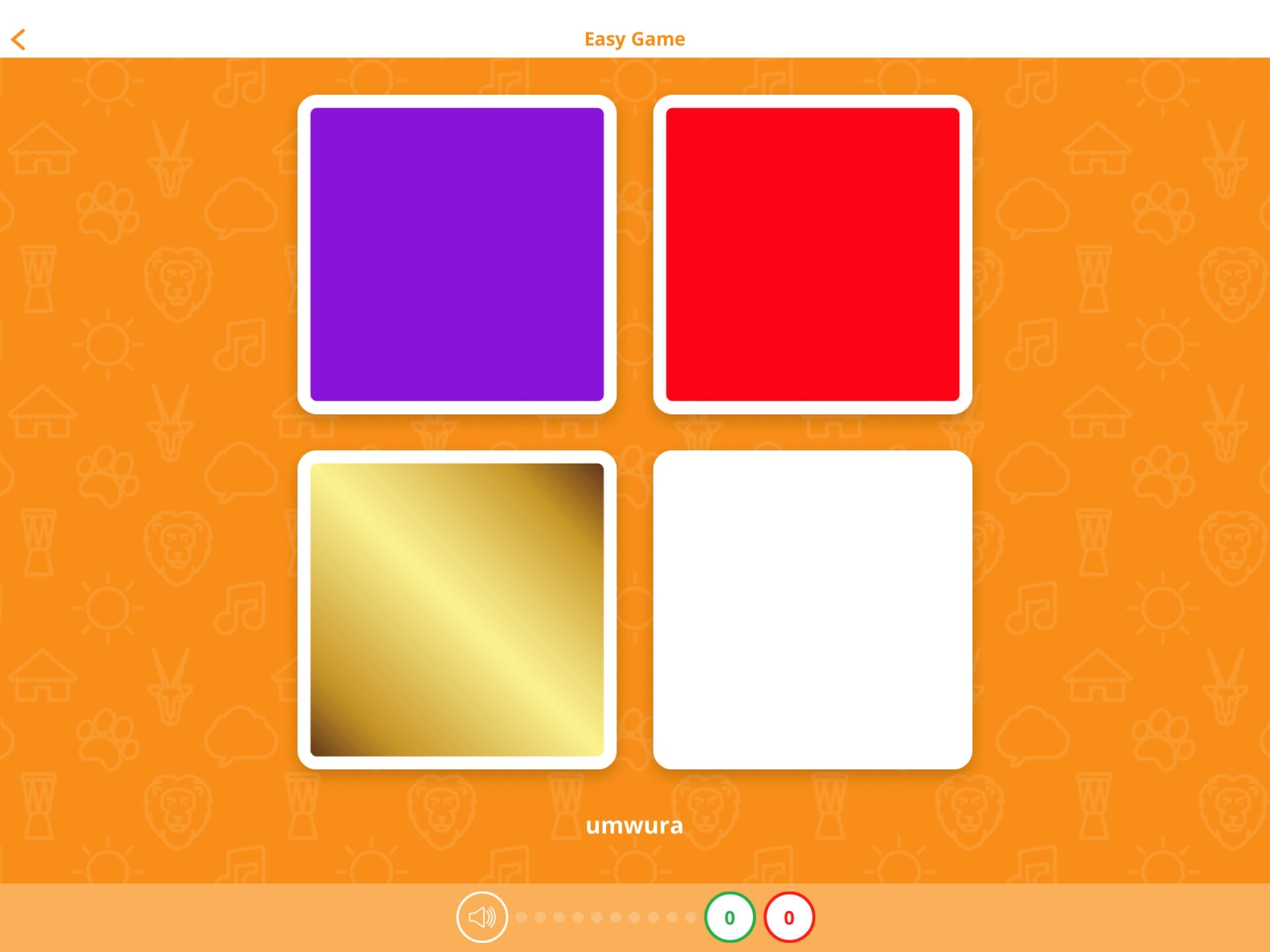 This is the first actual game you’ll play, once you’ve completed the Phrase Practice.

You’re shown a number of different images with their accompanying audio and text. Their positions are then mixed up, and you have to match the audio with the correct image. 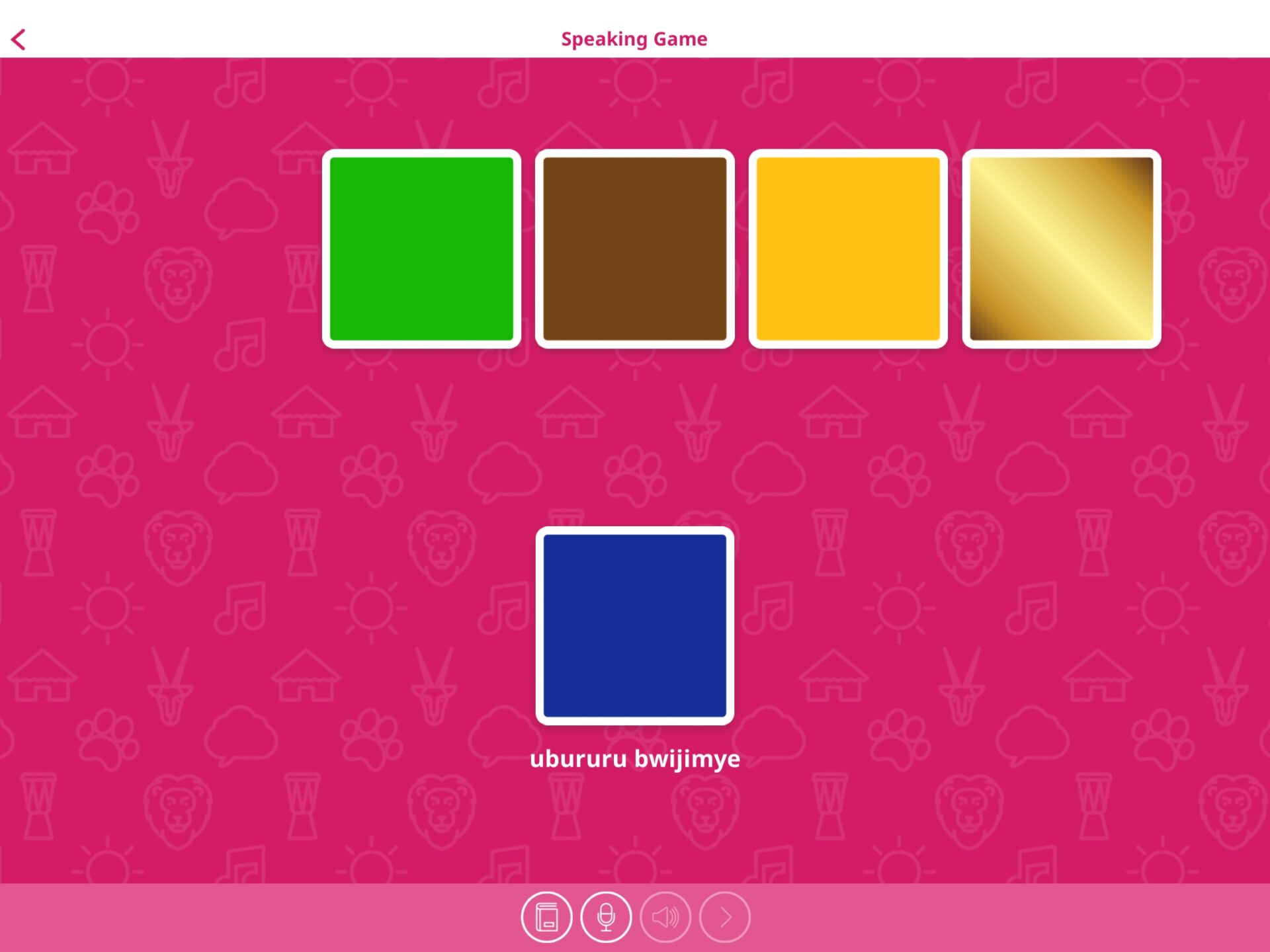 This game is designed to hone your pronunciation skills.

You’re shown 5 different words, and you have to record yourself saying them, then in the next stage match your recordings to the correct images. 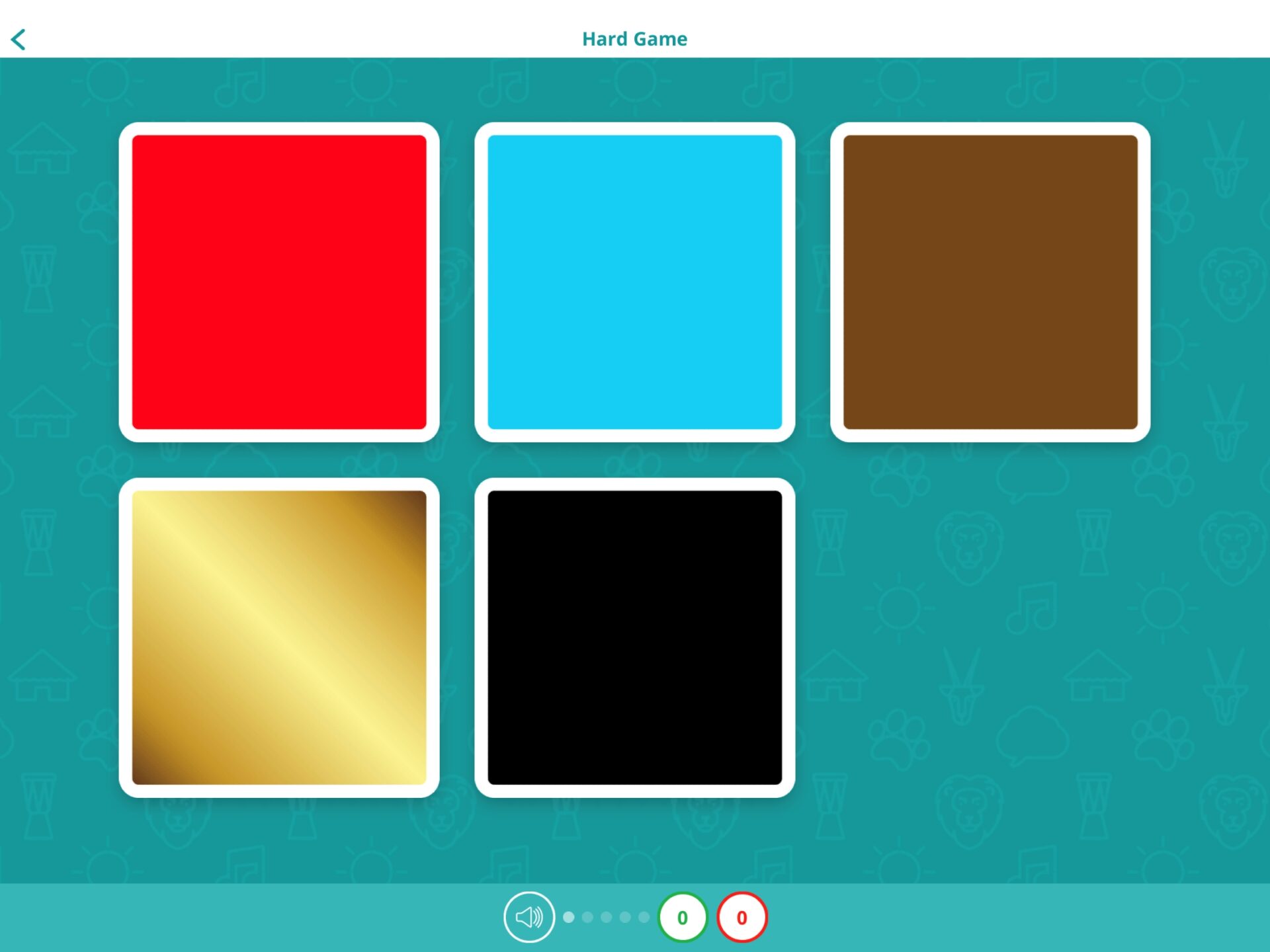 This game is similar to Easy Game, only… wait for it… harder!

Your task is to select the correct image for the audio you hear, only there are no refreshers or text clues to help you, you have to rely on your memory and knowledge.

This is a true test of how well you’ve learned the words and phrases in the topic, as you’ll have to make your selections based on the audio alone. 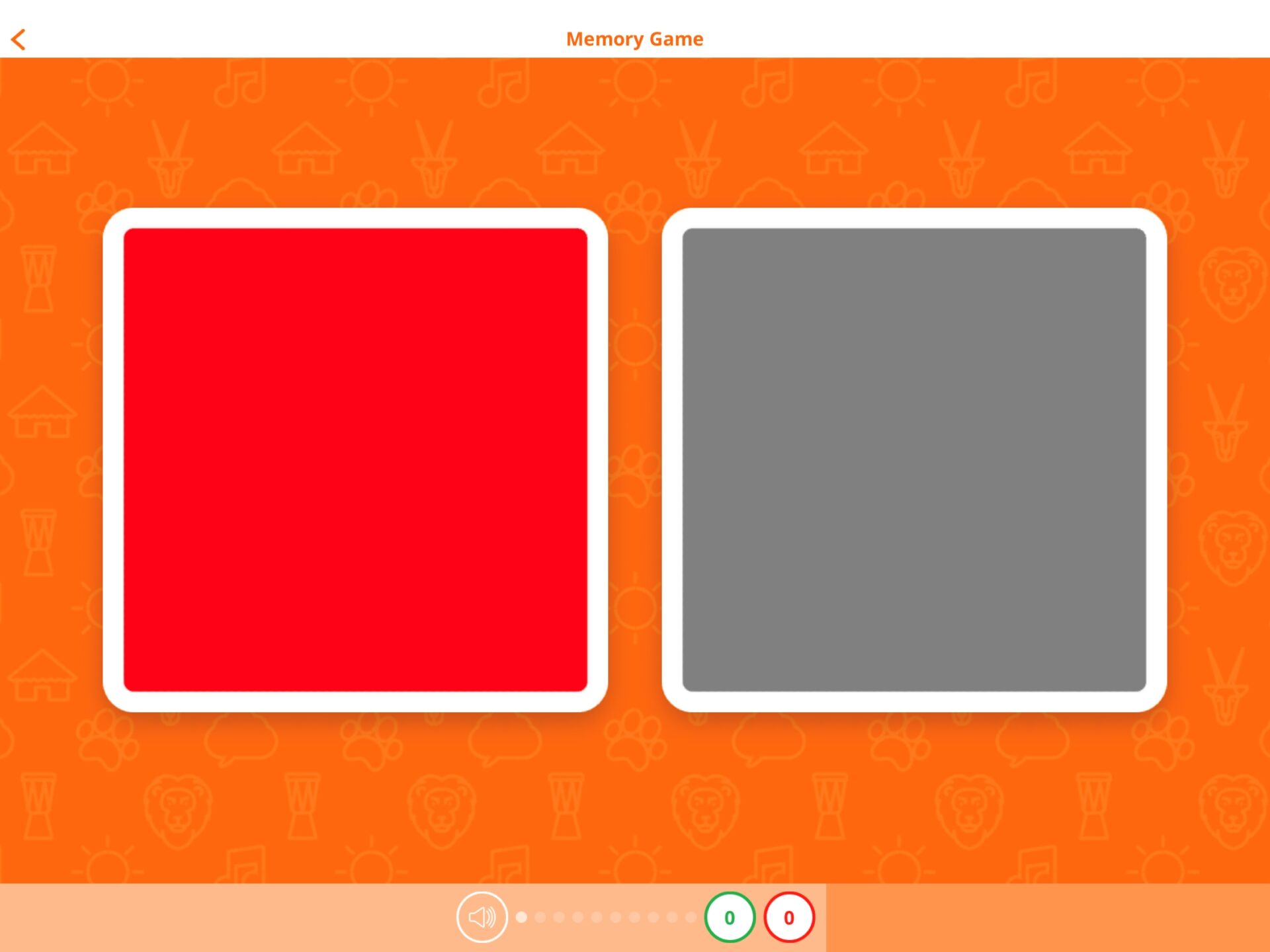 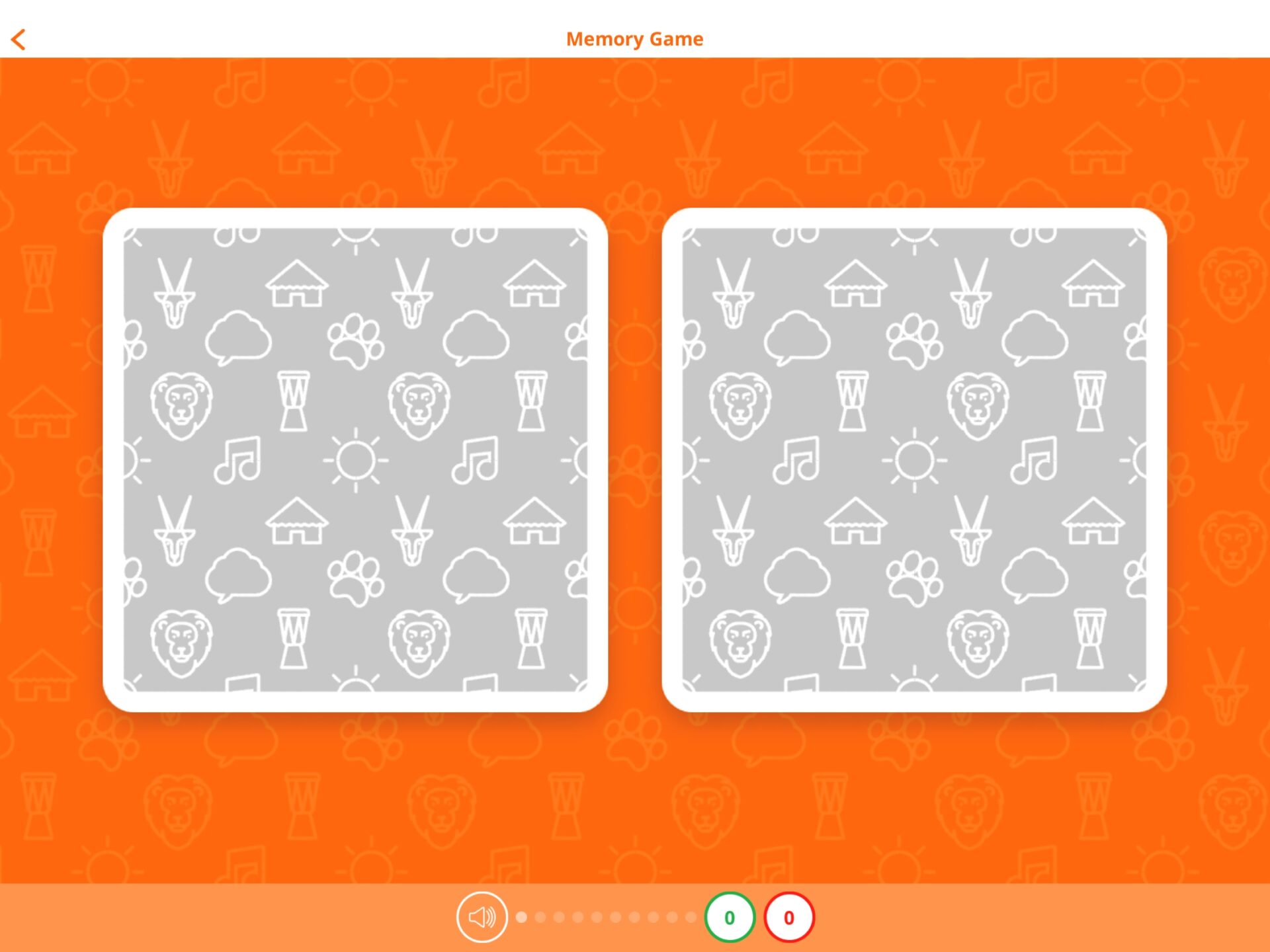 You’re on the clock in this game, so you’d better know your stuff before you attempt it!

In the first half of this game, you’re shown a handful of images (increasing in number as you progress) along with their audio. You need to remember where each image is positioned because once the cards are turned over, you’ll need to select the correct one for each word you hear.

A timer runs at the bottom of the screen, so you’ll need to work quickly and accurately if you want to beat the clock.

The second half of the game involves choosing the correct pictures to match the audio you hear, though with the added pressure of the timer. 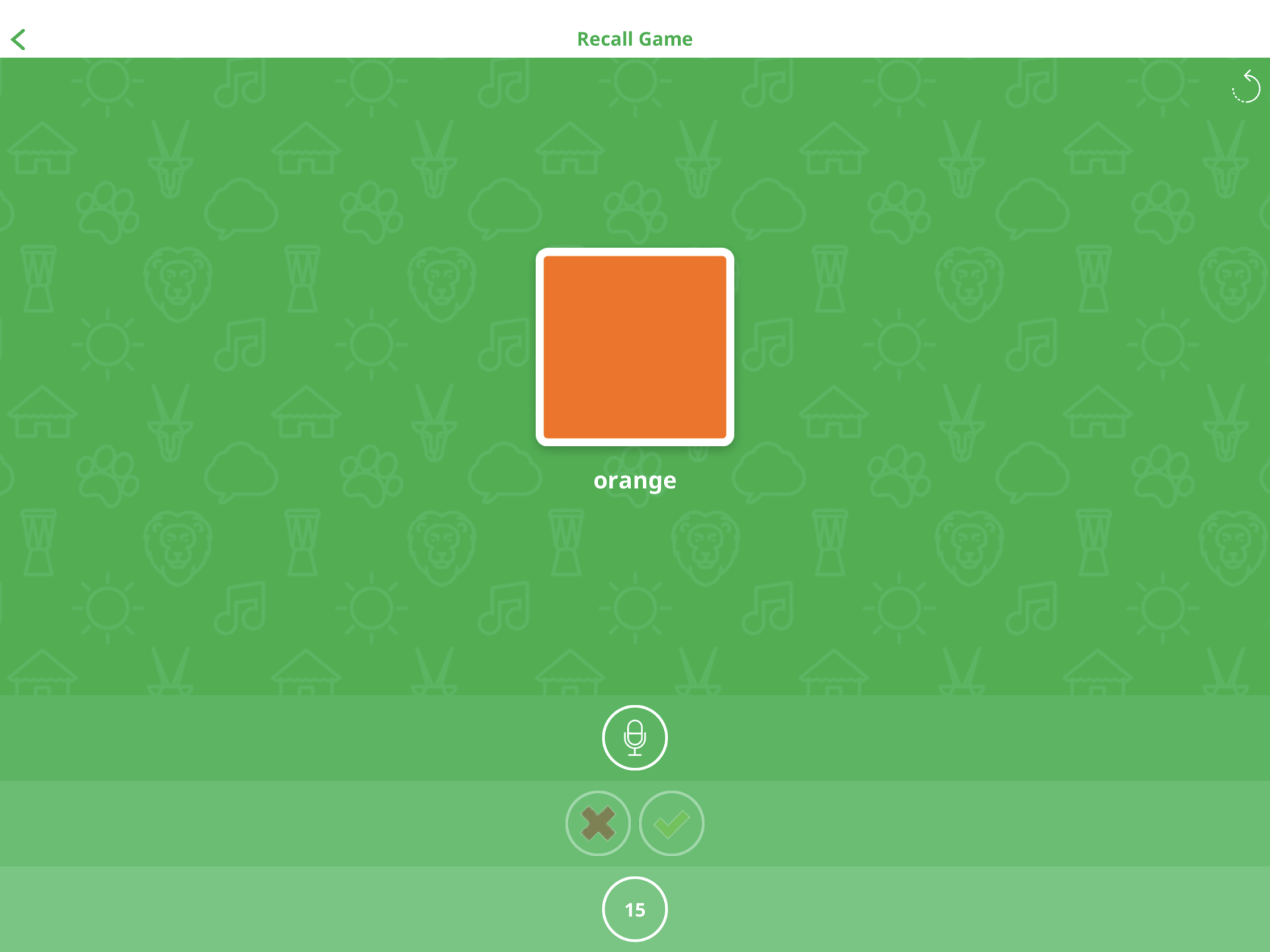 This is perhaps the greatest test of your knowledge, hence why it’s the final game you’ll play.

You’re shown the picture and the English equivalent of the words, then you have to record yourself saying the translation. Once you’ve recorded yourself, you’ll then hear the native speaker’s version and see if you got it right.

It’s up to you to mark yourself correct/incorrect. If you mark yourself incorrect, the word will be put back into the pool so you can have another go at it until you get it right.

uTalk has a points system that rewards users with coins for their progress. These points are awarded for a wide range of (sometimes bizarre) achievements, and it’s easy to rack them up as you play through the topics.

Coins can be used to unlock new topics, either for the language you’re currently playing (if you don’t have them unlocked already) or for a brand new language. 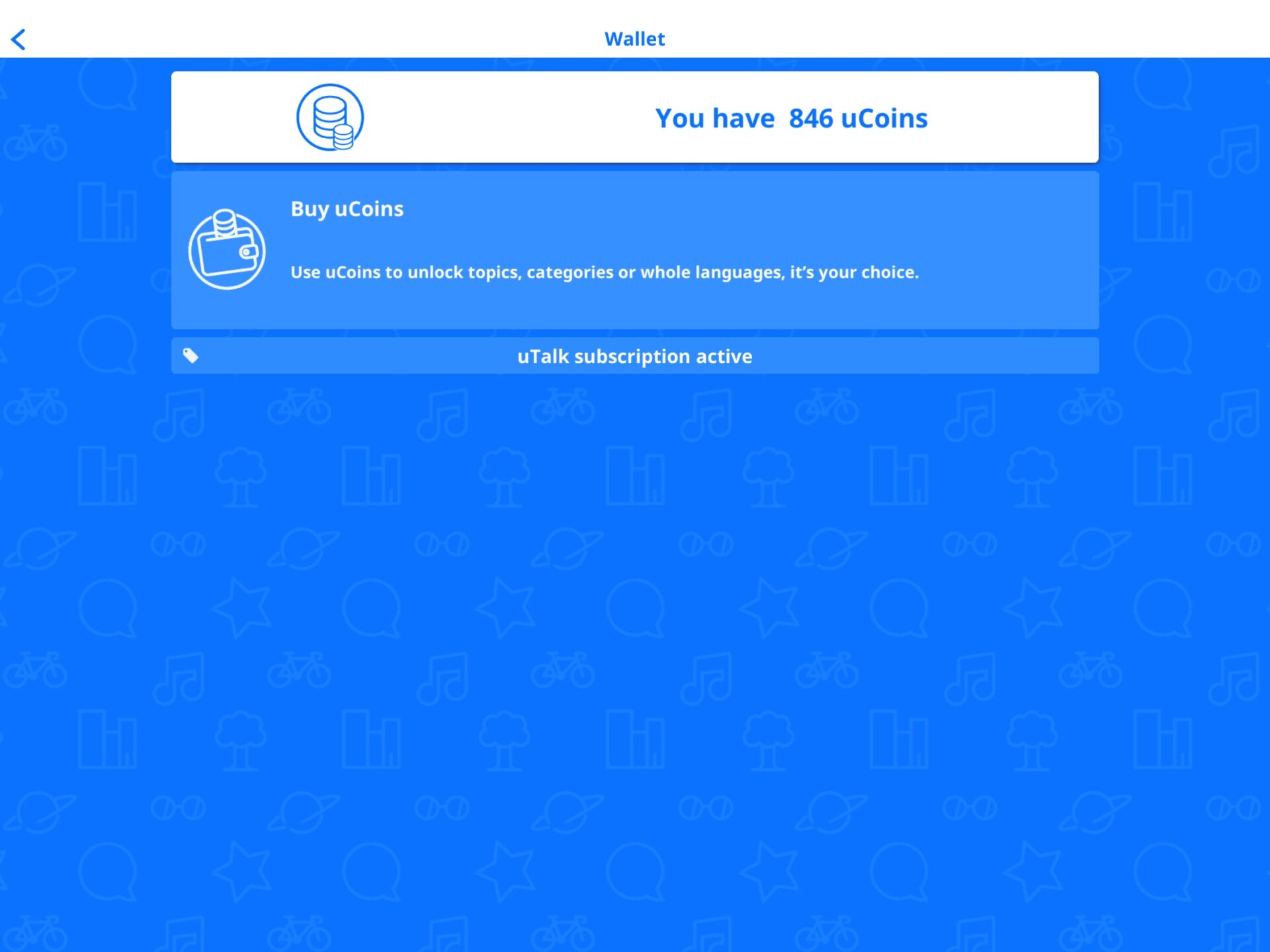 Each topic costs 40 coins; unlocking a new language in its entirety costs 2600 coins. You can, of course, buy coins, but there are plenty of opportunities to earn them for free as you play.

The awesome thing about using your coins to purchase topics is that you get to keep these forever, irrespective of your subscription status. You own them.

What uTalk does well

At Language Hobo, we’re big fans of uTalk and have used the app to help us learn some basic vocabulary for multiple languages. For vocabulary building, uTalk is one of the best apps out there.

The beauty of uTalk is that it’s designed to work around you. You can pick and choose the topics you want to learn, which means you’re never wasting time on material you don’t need or already know.

The audio-led approach is fantastic for pronunciation, as you’ll be able to assess how well (or poorly) you’re doing, and the games are great for helping you to commit what you’ve learned to memory.

Having both male and female versions of the audio is also a huge help, as you’ll get used to hearing different pronunciations, thereby increasing your comprehension.

What uTalk doesn’t do so well

Where it falls short is in the lack of grammar explanations. This is not a huge problem for beginners, as the focus is very much on building vocabulary, but sooner or later, you’ll want to learn how to build your own sentences, which isn’t something that uTalk covers.

For that reason, we recommend using uTalk in conjunction with another resource that can teach you the basics of grammar, whether that be another program or a book.

If you like the sound of the program, why not try it for a month and see how you get on? Sign up with us and you’ll get 20% off any subscription.