Where Is Afrikaans Spoken?

Afrikaans is a West Germanic language spoken in southern Africa. It is also spoken by the Afrikaner diaspora in English-speaking countries across the world.

If you’re thinking of learning Afrikaans, knowing where in the world to find speakers of the language will be helpful, as you’ll, no doubt, want to practice with natives once you’re able.

This article will give you an overview of the top places in the world where Afrikaans is spoken – and by how many people – plus provide a brief historical context for why the language is used there.

The 10 countries with the most Afrikaans speakers 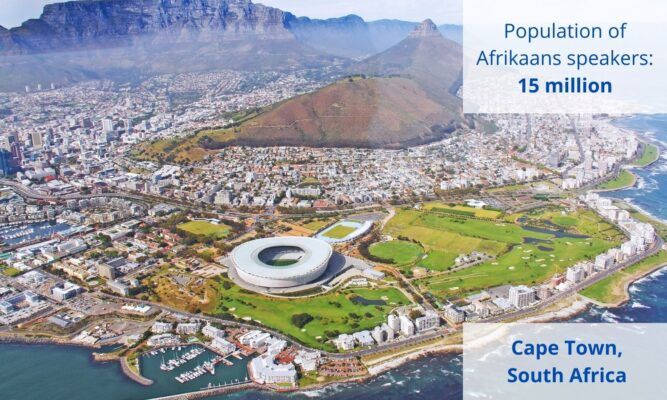 Afrikaans is one of the official languages of South Africa, spoken by around 7 million people as a first language. It’s also a widely used second language, with an estimated 8 million people speaking it as such, bringing the total number of speakers to over 15 million.

The history of Afrikaans in South Africa begins in the 1600s when Dutch invaders arrived in the country and began to colonize it. The Dutch settlers, known as Afrikaners, brought the language with them.

Today, you’ll find the largest concentration of speakers in the following regions:

Many people in these areas can speak both English and Afrikaans.

(Read a much more in-depth break down of where in South Africa Afrikaans is spoken – by province, town and district.) 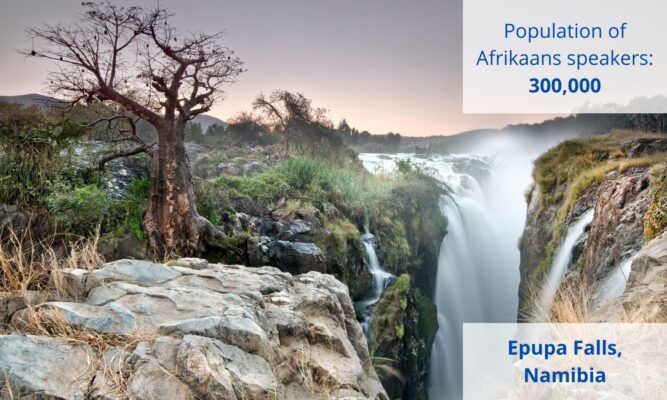 Afrikaans is one of the national languages of Namibia, though English is the official language. It’s spoken as a lingua franca across the country, with most speakers using it as a second language, not a first/home language.

The history of Afrikaans in Namibia is closely linked to that of South Africa’s. Afrikaners began to move into Namibia in the late 1800s (then known as German South West Africa) as part of the expansion of the Cape Colony. When Namibia gained independence from South Africa in 1990, Afrikaans remained a national language alongside English and German.

It’s estimated that over 300,000 people in Namibia speak Afrikaans – that’s around 10% of the population.

Namibia’s capital city, Windhoek, has one of the largest concentrations of first language Afrikaans speakers – making up about 10% of the population of the city. However, it’s estimated that up to 50% of people there speak Afrikaans as a second language.

Other areas of Namibia with sizable Afrikaans-speaking populations include the coastal town of Swakopmund, the city of Rundu in the northeast, and Otjiwarongo, a town located roughly halfway between Windhoek and Rundu, and where roughly 90% of the population speaks Afrikaans. 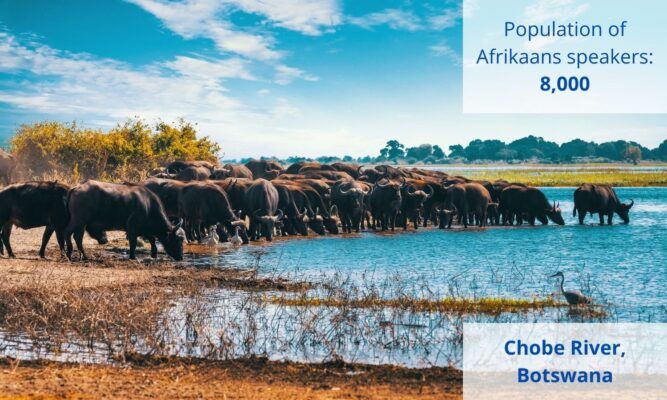 Afrikaans is also spoken by small communities of South African expats in Botswana. Due to the close proximity of Botswana to South Africa, it’s not uncommon for people from there to move to Botswana for work or other opportunities.

There are roughly 8,000 Afrikaans speakers in Botswana, a large percentage of which live in and around the capital city, Gaborone.

In a historical context, the arrival of the Afrikaans language into Botswana came as a result of a Dutch Boer invasion in the late 1800s. The Boers (or Afrikaners) were in search of new grazing lands for their cattle, and clashed with the indigenous populations there.

As with Botswana, most of the Afrikaans speakers you’ll find in Zimbabwe are South African expats, farm owners and the like. This is due to the fact that, historically, when Zimbabwe (renamed Rhodesia at the time) was under European rule, many of the settlers were Afrikaners from South Africa.

You won’t find many native Zimbabwean’s speaking Afrikaans, though some people who work for Afrikaner employers might be able to understand it. 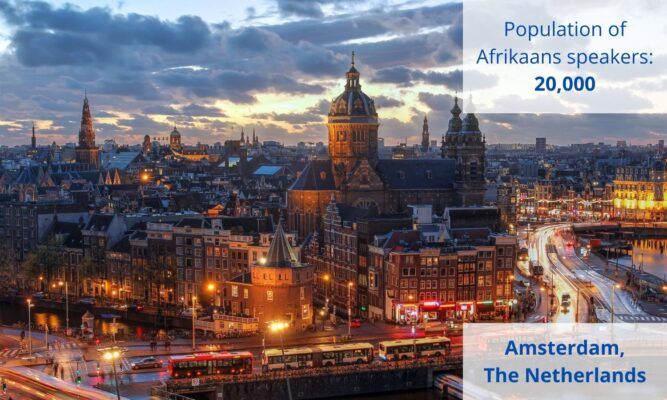 The Netherlands is the country where Afrikaans originated. However, the African version of the Dutch language is today only spoken by a small number of people – around 20,000.

Though the number of Afrikaans-speakers in Holland is relatively small, due to the mutual intelligibility between Afrikaans and Dutch, and the bountiful career opportunities available in the Netherlands, more and more South Africans are emigrating there, according to this article from Business Tech. 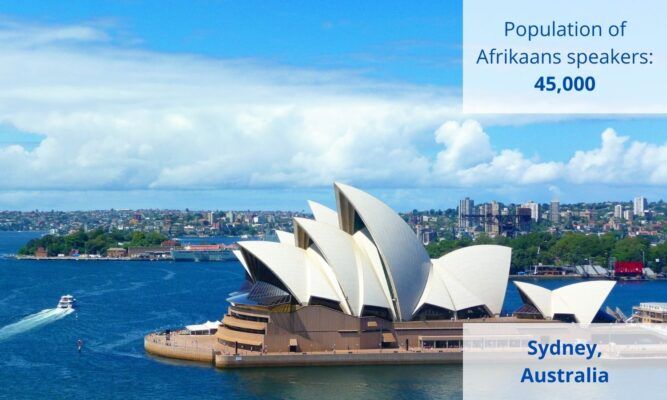 According to census data, there are over 100,000 people of South African descent living in Australia, with the highest percentage found in Sydney, Perth and Melbourne.

Though many of these people do not speak Afrikaans publicly, roughly 45,000 of them speak it as their first language at home.

The mass emigration of Afrikaners from South Africa to Australia began in the mid 1990s, as people looked to leave the country due to the political and economic instability at the time, namely the fall of the Apartheid regime and the election of Nelson Mandela as president. 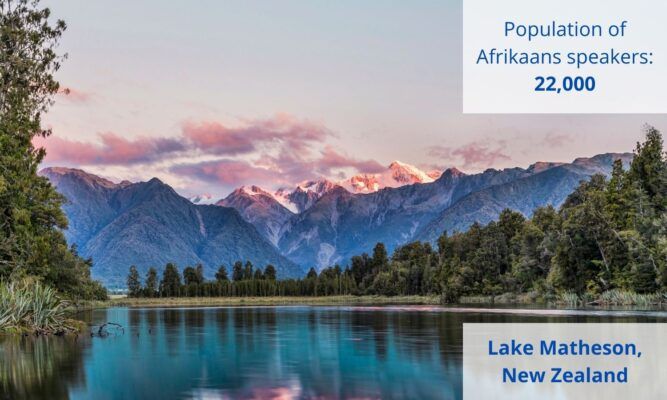 There are also a fair number of Afrikaans speakers in New Zealand, again due to the large number of South African expats living there who came over to the country under similar circumstances as those in Australia.

There are an estimated 22,000 Afrikaans speakers living in New Zealand. 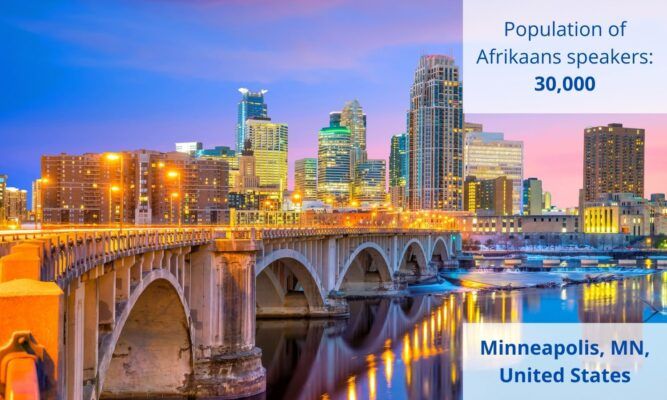 There is a small but significant community of people of South African descent living in the United States, particularly in the states of Illinois and Minnesotta.

This is largely due to the fact that since the 1990s and the fall of the Apartheid regime, many white South Africans emigrated to the US in search of better economic opportunities.

It’s estimated that there are around 30,000 Afrikaans speakers living in the US today, and more are likely to emigrate there in future, in order to escape the civil unrest present in South Africa. 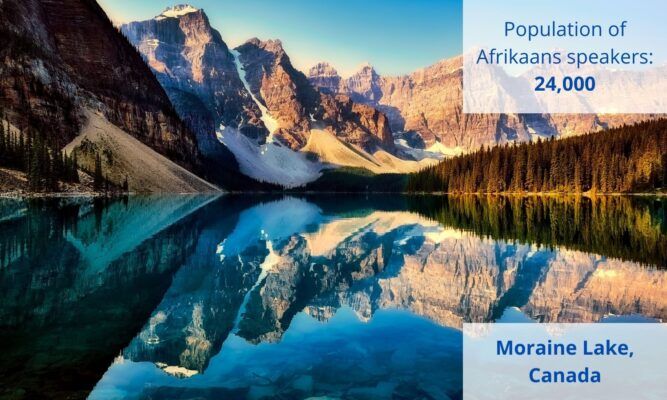 Canada’s population of Afrikaans speakers is a little smaller than in the US, at about 24,000. This number is growing rapidly, however, as many South Africans seek to emigrate there in search of a better life. 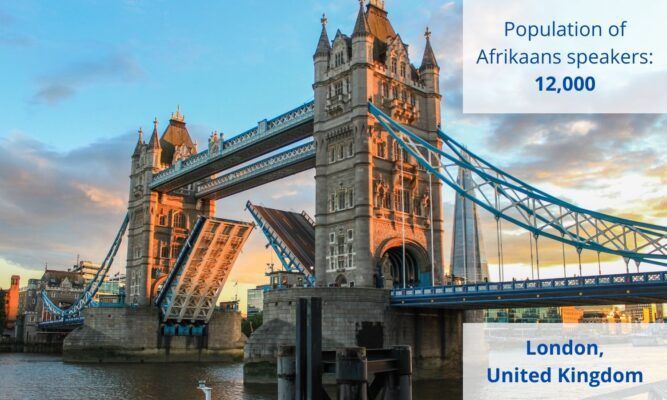 As you can see, Afrikaans is spoken in many places around the world, though the majority of speakers are still found in southern Africa. The language has a long and complicated history, which is evident in its spread to various countries across the globe.

Of course, Afrikaans speakers are found almost everywhere, though if we had to list each country, we’d be here forever!

If you’re interested in learning Afrikaans and you live in one of the countries listed, you won’t have trouble finding natives with whom to practice. If this isn’t an option for you, getting an online speaking partner is a perfectly good substitute.

Tandem is a great, free app that connects you with native Afrikaans speakers from all over the world who want to learn your language in exchange for helping you practice theirs.

With Tandem, you can have conversations with Afrikaans natives via text, audio, and video chat, which will help you become more confident and proficient in Afrikaans.

If you’re looking for an Afrikaans tutor to help you improve your language skills, italki is the perfect place to find one. With dozens of native, certified Afrikaans tutors to choose from, all at very affordable prices, you’re sure to find someone who’s just right for you.

No matter where you are in the world, there’s always a way to learn Afrikaans!