Greetings And Salutations In Albanian

A good starting point for anyone new to Albanian is to learn the different greetings, farewells and other salutations used daily in Albania and other Albanian-speaking countries.

Not only are they essential for everyday conversation, but the fact that you took the effort to learn these basic words will be looked on favorably by natives when you visit their country.

In this article, we’ll look at the most common greetings and salutations in Albanian, when to use them, and how to reply. By the end of the post, you’ll be able to greet, say goodbye, and ask how someone is doing.

How to say “hello/hi” in Albanian

One of the most common greetings in Albanian is “tungjatjeta”, which can be used for both hello and goodbye. It literally means “long life to you” or “may you live long”. You can generally use this phrase with anyone, regardless of whether you know them well or not.

“Tung” is a shortened form of the word “tungjatjeta” and can be used in the same way.

If you want to say “hello” in a more formal way, you can say “Përshëndetje”.

There are a couple of informal ways of saying “hello”, too. You could use either “çkemi”, which is a bit like saying “what’s up?” in English, or “të fala”, which literally translates as “I greet you”.

How to say “good morning” in Albanian

To say “good morning” in Albanian, you can use “mirëmëngjes”. You can use that phrase from dawn until midday.

How to say “good day” and “good afternoon” in Albanian

Saying “good day” in Albanian is another way of saying “hello”. This phrase is “mirëdita”. You would also use “mirëdita” for “good afternoon”.

This phrase can technically be used at any time of the day, though it’s more common to use it up until early evening. 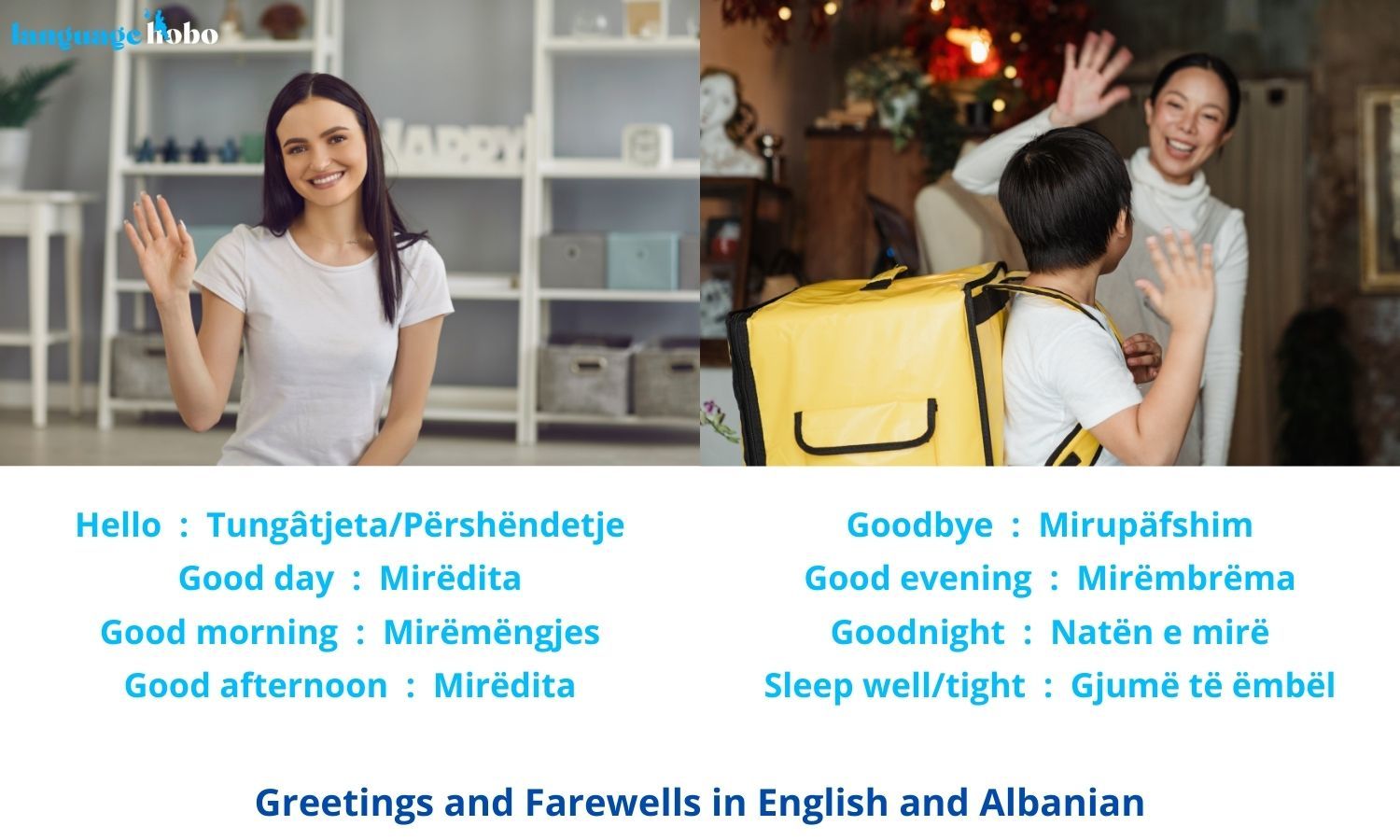 How to say “good evening” in Albanian

If you want to say “good evening” in Albanian, you can use the phrase “mirëmbrëma”. You would typically use this from early evening right up until nighttime.

How to say “goodnight” in Albanian

To say “goodnight” in Albanian, you would use the phrase “natën e mirë”. You would generally use this phrase from nighttime until about dawn, though it can be used in the evening as a farewell when you or someone else are leaving a place.

“Gjumë të ëmbël” literally translates as “sweet dreams”, and is the Albanian equivalent of saying “sleep tight”. You would use this phrase as a farewell when you or the person you’re talking to is going to bed. You’d usually reserve this for people you know well, such as family and friends.

How to say “goodbye” in Albanian

The most common way to say “goodbye” in Albanian is “mirupafshim”. You can use this phrase with anyone, whether you’re familiar with them or not.

As with every language, there are other ways of saying “goodbye”, some less formal than others. For instance, you could use “lamtumirë”, which is a formal way of saying “farewell”, or, as we saw above, the informal phrase “tung”.

“Shihemi më vonë” is another way of saying “goodbye”. This phrase translates to “see you later”.

Finally, if you want to make your farewell more pleasant, try adding “ditën e mir!”, which means “have a nice day”.

Once the initial greetings are over, you’ll probably want to ask the person you’re talking to how they are, adding an extra layer of politeness to the conversation.

How to say “how are you?” in Albanian

Getting a little more specific, you could also use, “si jeni sot?” to ask “how are you today?”.

Another way of asking how someone is might be “si po shkon?”, which literally translates as “how is it going?”

If you’re the person being asked how they are, you’ll probably want to reply. Depending on how your day’s going, you might want to say, “I’m fine, thank you”, in which case you’d use the phrase “jam mirë, faleminderit”.

To send the question back to them, you simply add, “po ti” to the end to mean “and you?”

We’ve looked at all the different ways of greeting someone and saying goodbye in Albanian. We’ve also seen how to ask “how are you?”, and how to respond.

Learning all these phrases is a great way to start your Albanian language journey. You’ll be able to impress locals and make a great impression from the start!

Just remember, though, that there are a number of different Albanian dialects, so the phrases we’ve looked at might not be exactly the same everywhere you go. We’ve used Standard Albanian here, for the most part, which is the universally accepted dialect.

For more information about some of the other dialects and where they’re used, check out our post, Albanian Dialects: Gheg vs Tosk, And More.