Is Albanian A Hard Or Easy Language To Learn?

There are many factors that can affect how difficult a language is to learn. This applies to Albanian as well. For native English speakers, Albanian can be very challenging for a number of reasons.

Albanian vocabulary, for example, isn’t similar to English vocabulary in any way. There are also some grammar rules present in the language that may confound native English speakers.

In this article, we’ll discuss some of the main reasons why Albanian can be tough to pick up if your mother tongue is English and you have no prior experience with the language or any of its closest linguistic relatives.

What makes Albanian difficult to learn?

One of the things that can make Albanian challenging for English speakers is that it doesn’t have any identifiably Latin or Germanic roots. This means that many of the words are completely unfamiliar and can be difficult to pronounce.

If you’re not already aware, the ease of a language is often judged by how similar it is to one’s native language. This means that languages like French, Spanish and Italian are often considered easier because they share many common words with English. Albanian, on the other hand, has completely different origins.

Now, while it’s believed that around 60% of Albanian is comprised of Latin loanwords, many of them have been warped to the point of being unrecognizable. The truth is, the Latin-influenced words won’t always be easy to spot in Albanian, which isn’t a problem you’d have with a real Latin-based language.

The Albanian alphabet has 36 letters 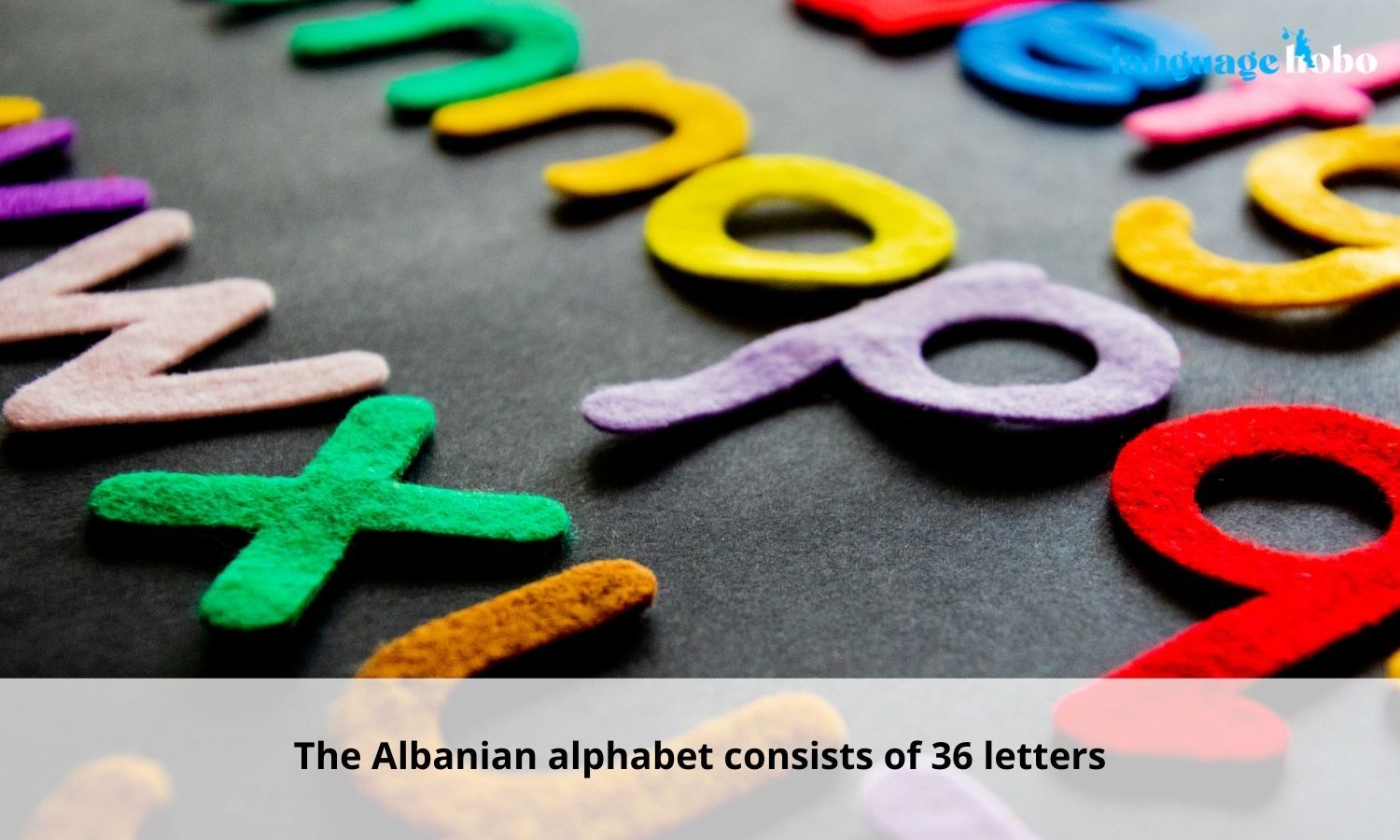 Another difficulty of Albanian is that, although it uses the Latin alphabet, it has 36 letters in it, which is more than most languages. This can make learning the alphabet and being able to read and write very challenging, especially for those who are just starting out.

Albanian also uses a lot of diacritics, which are small marks used to change the pronunciation of a letter. These can be difficult to remember and use correctly, especially for beginners.

Many of these letters make sounds never before heard in English, which can be hard to wrap your head around, and even harder to pronounce.

Albanian has many dialects

There are many different dialects of Albanian, which can make communication between yourself and speakers from different Albanian-speaking regions tough.

This is because there can be significant differences in the way words are pronounced and used, and just because you learn one dialect, does not mean you’ll be understood by all Albanians.

Albanian grammar can be complicated, especially when compared to English. There are many different rules that you need to learn in order to be able to form sentences correctly.

One example of this is the use of gendered nouns. There are three genders in Albanian (male, female, and neuter), and the way you write each noun will change depending on whether it’s singular or plural, whether it uses the direct or indirect article (the / a or an), and what case (what role the noun plays in the sentence) it’s in.

Speaking of cases, there are six in Albanian, three more than English. These are: nominative, accusative, dative, genitive, ablative and vocative. Each one uses different endings for different words, and you need to be able to use them correctly in order to be understood.

If you haven’t studied grammar, this stuff will be extremely confusing, and will slow down your progress as you try to learn it. 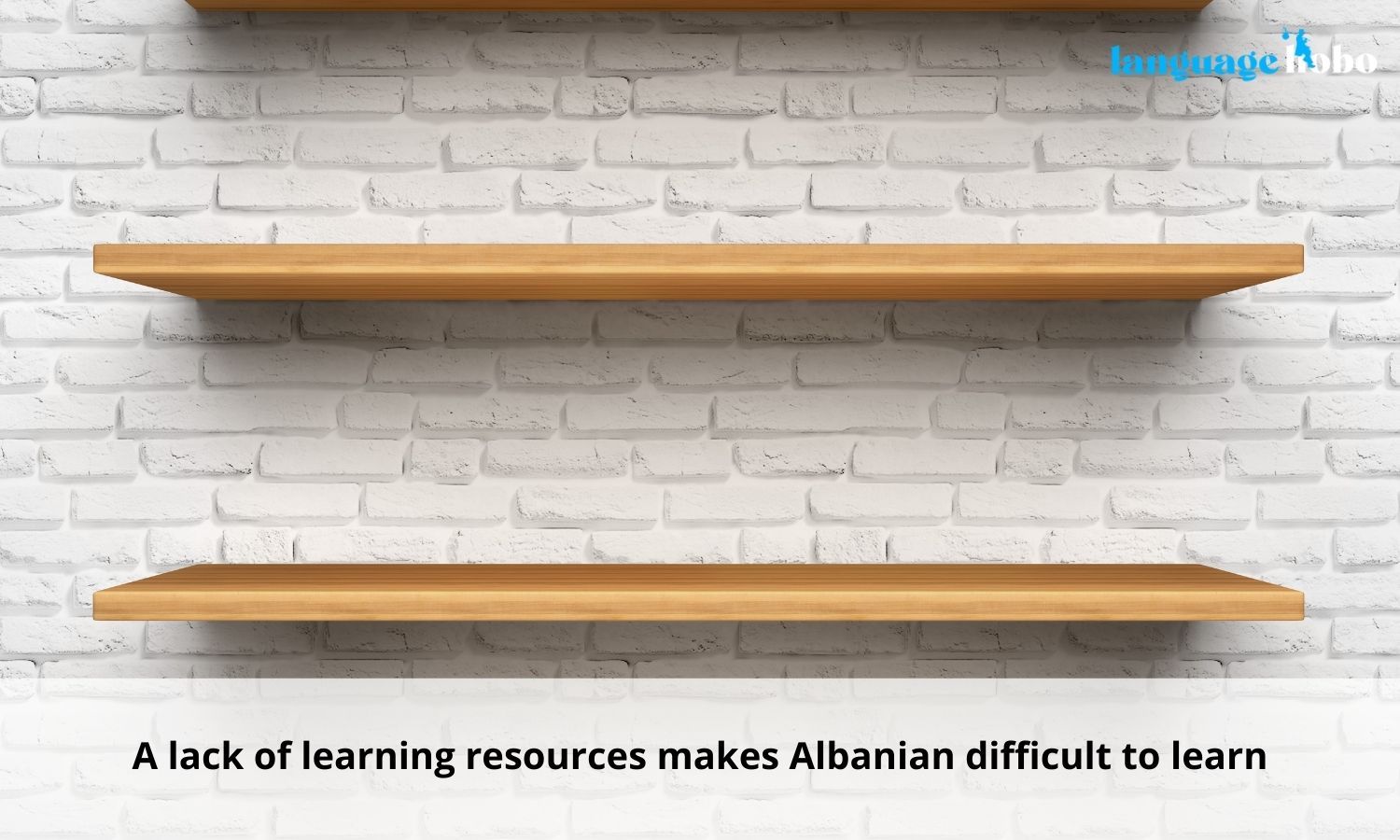 One of the main reasons Albanian can be difficult to learn is because there’s a lack of quality learning resources out there.

In order to fully immerse yourself in the language and learn it quickly, you need to have access to resources like textbooks, audio courses, apps, and websites that are specifically designed for Albanian learners.

There simply aren’t enough of these available, which is likely to make the learning process more difficult and frustrating.

(Check out our list of available Albanian learning materials.)

Now, all that said, there are features of the Albanian language that make it a little easier to learn than some other languages out there. We mention them below in the hopes that you won’t find Albanian too daunting.

What makes Albanian easy to learn?

The fact that Albanian uses the Latin alphabet is a definite plus. This means that, for the most part, you’ll know how to vaguely pronounce the words you read (with guidance), and you’ll be able to read and write the language without having to learn a whole new writing system.

Though it might not seem like it at first glance, Albanian is actually more or less phonetic, meaning that the way a word is written corresponds pretty closely to the way it’s pronounced. So once you familiarize yourself with how all the letters are pronounced, you’ll be able to read and pronounce most Albanian words correctly.

The word order in Albanian is typically SVO (subject-verb-object), which is the same as English. This means that, unlike some other languages with different word orders, you won’t have to learn to rearrange your words in order to form a correct sentence.

The language is melodic

If you’ve ever heard Albanian spoken, you know that it has a very melodic quality to it. This is due to its use of a lot of vowels, as well as the fact that stressed syllables are typically longer than unstressed ones.

While this might not make the language any easier to understand, it does make it more pleasant to listen to, which can make it more enjoyable to learn.

Well, there are certainly easier languages to learn than Albanian, but it’s not the hardest language out there either. Just because there are elements of it that can be tricky, particularly for someone who’s new to language learning, you shouldn’t let that deter you.

The truth is, if you’re drawn to the language, none of its complexities will seem insurmountable. Learning any language takes time; the most important thing is to find resources that work for you and to be patient as you progress.

Albanian is a fascinating language with a rich history and culture behind it. If you’re up for the challenge, we say go for it!

Learn some common Albanian greetings or read some original Albanian love poems to help you reach your fluency goal.