Numbers And Counting In Afrikaans

One of the most important things you’ll need to learn when you’re learning a new language is how to count and use numbers in their many forms – from telling the time to counting money, and everything else in between.

Afrikaans is no exception. You won’t get far in the language without some understanding of numbers and counting. Being able to state the date or your age will also make you feel much more confident and competent in the language.

Because we realize how important it is to learn all the different ways that numbers show up in Afrikaans (cardinal numbers, fractions etc.), we’ve put together a comprehensive guide that covers them all. 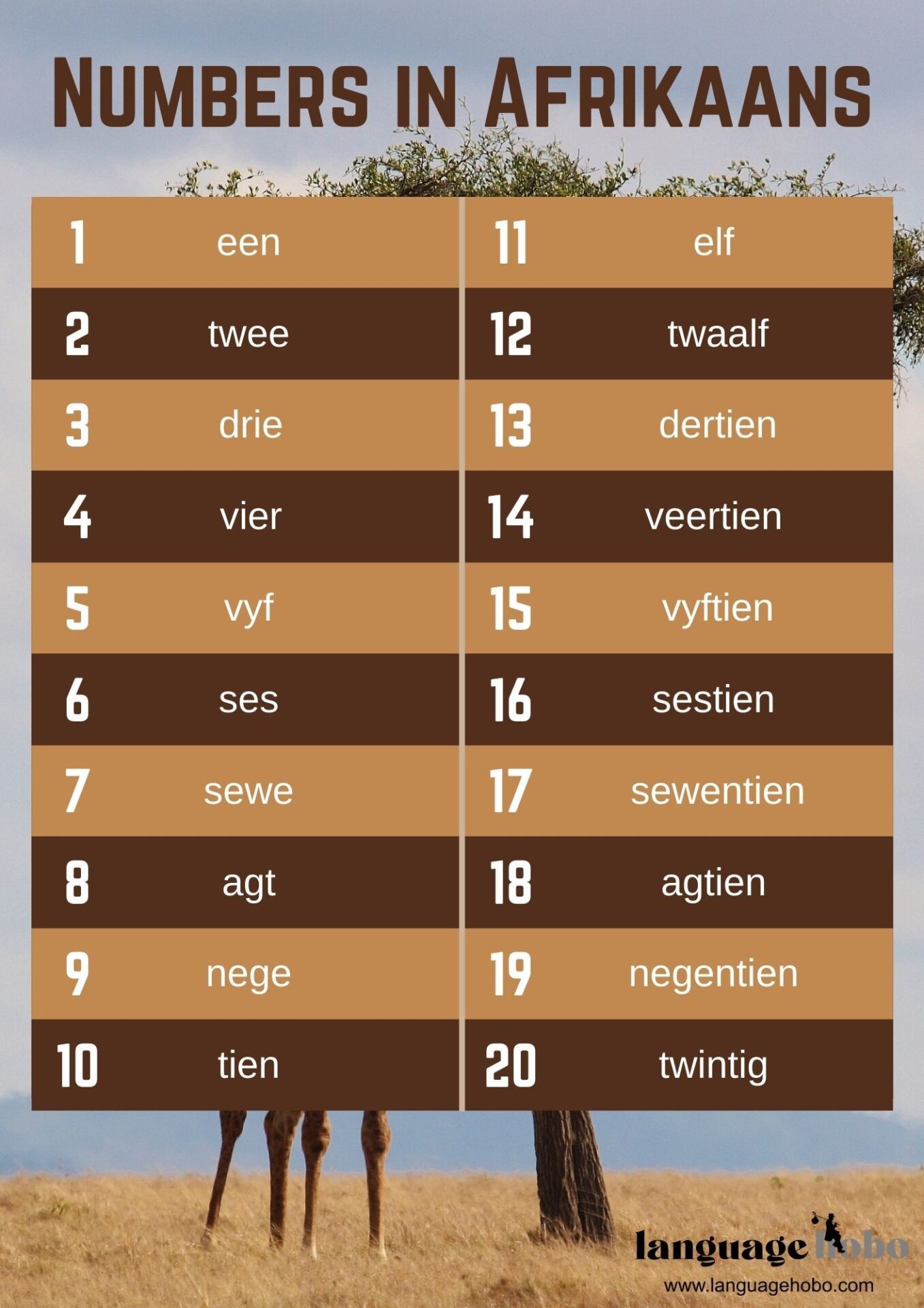 Cardinal numbers (1, 2, 3 etc.) are the most basic form of numbers, and they’re pretty straightforward… that is until you get to twenty-one and beyond.

Forming teens is done almost identically to the way it’s done in English, by adding the -tien (ten) suffix to the singular number (dertien, veertien etc.). But things get a little, erm, let’s say Germanic (see what I did there?) when you get past twenty.

In Afrikaans, as in German, the units come before the tens. For example, “twenty-one” is “een-en-twintig” (one and twenty).

Though this may seem strange, this method of counting isn’t actually as alien as you might think. English once followed this pattern too, something you’ll see in Shakespeare. (For those who are familiar with the 18th century nursery rhyme, Sing a Song of Sixpence, you’ll know it’s used there, too.)

Ordinal numbers (1st, 2nd, 3rd etc.) are used to denote rank or position. In Afrikaans, they work in a similar way to cardinal numbers, but with a few slight changes.

For example, the ordinal number for first is “eerste”, for second is “tweede”, and from third right up to nineteenth (minus eighth, which is “agste”), they all end in -de. From twentieth onward, ordinal numbers are formed using the cardinal number plus the suffix -ste.

You’ll want to know how to say things like “half” or “quarter”, and luckily, it’s not too difficult. You’ve already encountered some of these words in the list above.

Recognizing and being able to do simple mathematical Afrikaans equations will make you feel as though you have super powers! Okay, maybe not super powers, but it’s still a neat ability.

In fact, the ability to actually add, subtract and multiply in a new language is a sign that you’re really starting to get the hang of things.

Here are some basic mathematical operation terms you’ll encounter during your studies. 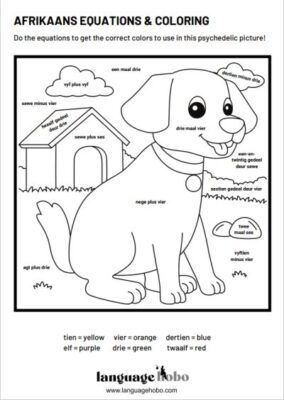 Download this free Afrikaans color by equations worksheet to practice your Afrikaans arithmetic!

This section includes the most common tuples (double, triple etc.) and multiplicative numbers (once, twice etc.). You’ll likely be using them a lot on your journey to fluency in Afrikaans.

Someone somewhere at some point will want to know your age, and if you don’t respond by telling them to mind their own business, you’ll probably want to know how to answer them.

Telling the time is straightforward enough, so it shouldn’t give you too much trouble. We’ve provided some examples below, but for a more in-depth look at the rules associated with the time, check out our post, Days of the Week, Months of the Year, Seasons, Weather and Time in Afrikaans.

The Date in Afrikaans

Just like with telling the time, saying the date is a pretty easy task. Now that you know the ordinal numbers, which are used to form dates, you’ll have no trouble at all. But we’ve provided some examples of how to structure your sentences should you decide to ask or answer the very important question, “What’s the date?”