82 Of The Most Common Verbs In Afrikaans (With Pictures)

Verbs are the mainstay of any language, forming the basis of communication and interaction. Put simply, you won’t be able to say anything in Afrikaans if you don’t know at least some of the most basic verbs.

Take the paragraph above; there were eight verbs used in those three sentences alone! Remove them, and the sentences become nonsensical.

So yes, verbs are important. They can also be pretty difficult to use, depending on the language. Luckily, Afrikaans actually has a regular, relatively simple verb system – much simpler than most natural languages (it’s pretty close to Esperanto’s way of conjugating verbs).

What is verb conjugation?

In essence, it’s the process of changing a verb to reflect its tense (past, present or future), mood (imperative, conditional, interrogative etc.), and person (first, second or third).

For example, the English verb ‘to be’ can take on different forms depending on who is doing the action – I am, you are, he/she/it is, they are, we are. In some languages (I’m looking at you, Spanish!), this can get complicated, but such is not the case in Afrikaans.

Take a look at the same verb conjugated in the present tense in Afrikaans.

Notice how the verb doesn’t change according to the subject pronoun – there’s only one form for each. Here are a couple more examples:

Aside from the two irregular verbs “to be” (wees) and “to have” (hê), all other Afrikaans verbs maintain the same, consistent conjugation pattern, even in different tenses.

There are three main verb tenses in Afrikaans: past, present and future. We’re assuming you know the difference between those terms, so we won’t bore you with an explanation. What we will say instead is that the past tense in Afrikaans isn’t as straightforward as the present tense.

The past tense in Afrikaans

Forming the past tense in English, for the most part, is done by tacking an -ed to the end of the base verb (walked, played, listened). In Afrikaans, as in German, something called the “present perfect tense” is used instead, which is made up of two parts – the past participle and the auxiliary verb “het” (have).

I know this sounds a bit complicated, but this example should help:

You don’t really need to know the ins and outs or the key differences between the past and present perfect tenses (but if you’re intrigued, this post by Talk English sheds some light on the topic).

Just know that to form the past participle in Afrikaans, you simply add the prefix “ge-” to the infinitive verb (the verb in its most basic form); and together with “het”, you’ve got your past tense. Examples:

Ek het gekyk = I looked (lit. I have looked)

Hy het gepraat = He talked (lit. He has talked)

(It should be noted that there are a few irregular verbs that don’t follow this pattern: verloor (to lose) and dink (to think) come to mind.)

The future tense in Afrikaans

The future tense is easier – just add “sal” (shall/will) before the infinitive, and you’re good to go:

Ek sal dit doen = I shall/will do it

Hy sal praat = He will talk

Okay, now that you know how to form the different verb tenses in Afrikaans, it’s time to introduce you to the verbs!

These are split into groups of 16 for easier navigation. They’re not in order of importance. 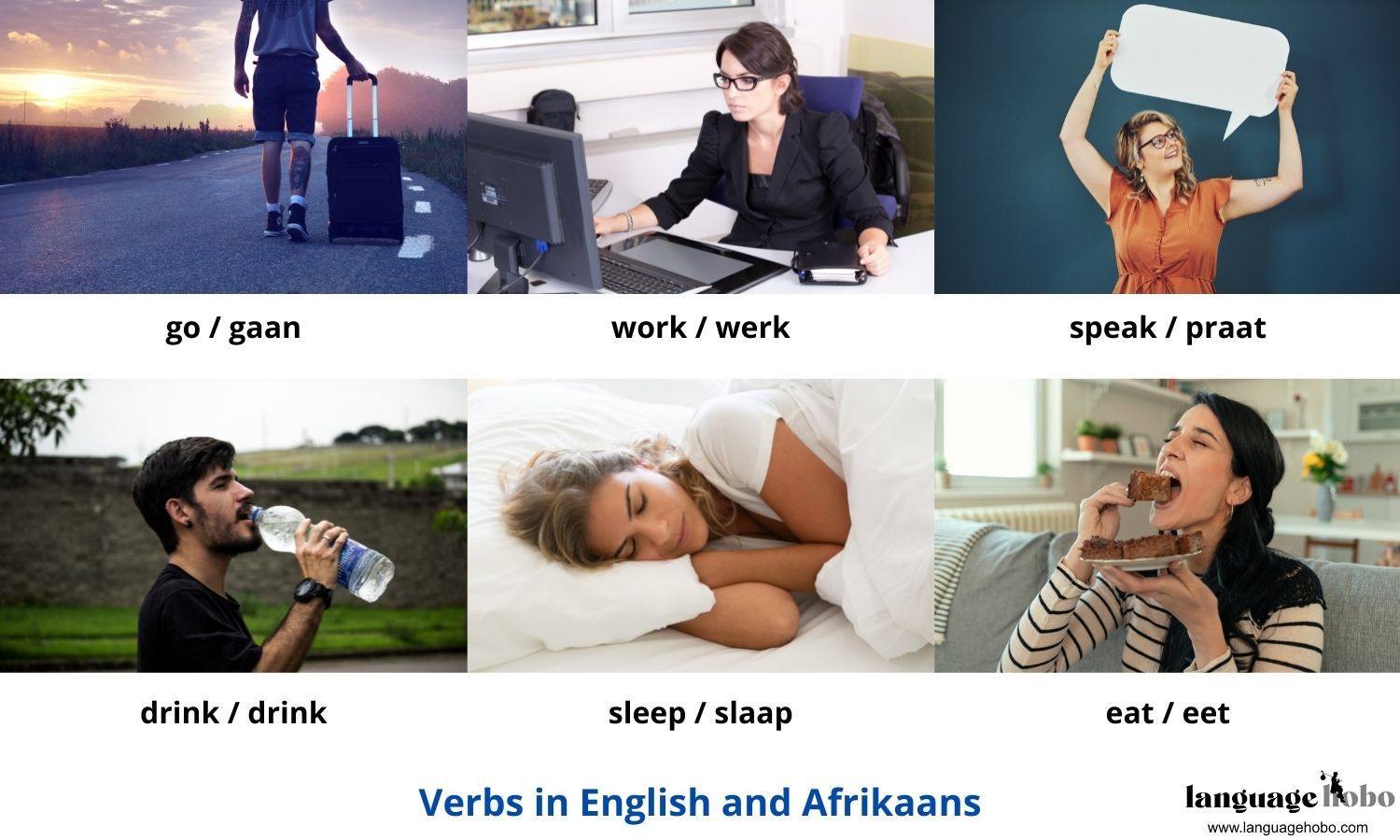