Typing In Amharic: The Best Online Keyboards And Apps

As you’re probably already aware, Amharic and some other Ethiopic languages use a unique writing system called Ge’ez. This writing system isn’t composed of letters per se, but of symbols called fidel, each of which represents a specific sound.

What this means is that, unlike Latin or even Cyrillic alphabets, which can be typed using a standard keyboard with relative ease, typing in Amharic requires a special keyboard.

Is there an Amharic keyboard?

The good news is, these are in abundance!

In this article, we’ll be taking a look at all the free options available to you, from online keyboards to desktop software downloads. Whatever your need, you’ll find an Amharic keyboard that suits you on this list.

Online Amharic keyboards: Which is best?

There are websites with virtual keyboards that let you type in Amharic. They work in multiple ways, and every website is different. What they all have in common, however, is that they’ll allow you to copy and paste the generated text anywhere you like.

The benefits of using an online Amharic keyboard are:

These are great for people who want quick, one-off solutions for typing in Amharic. 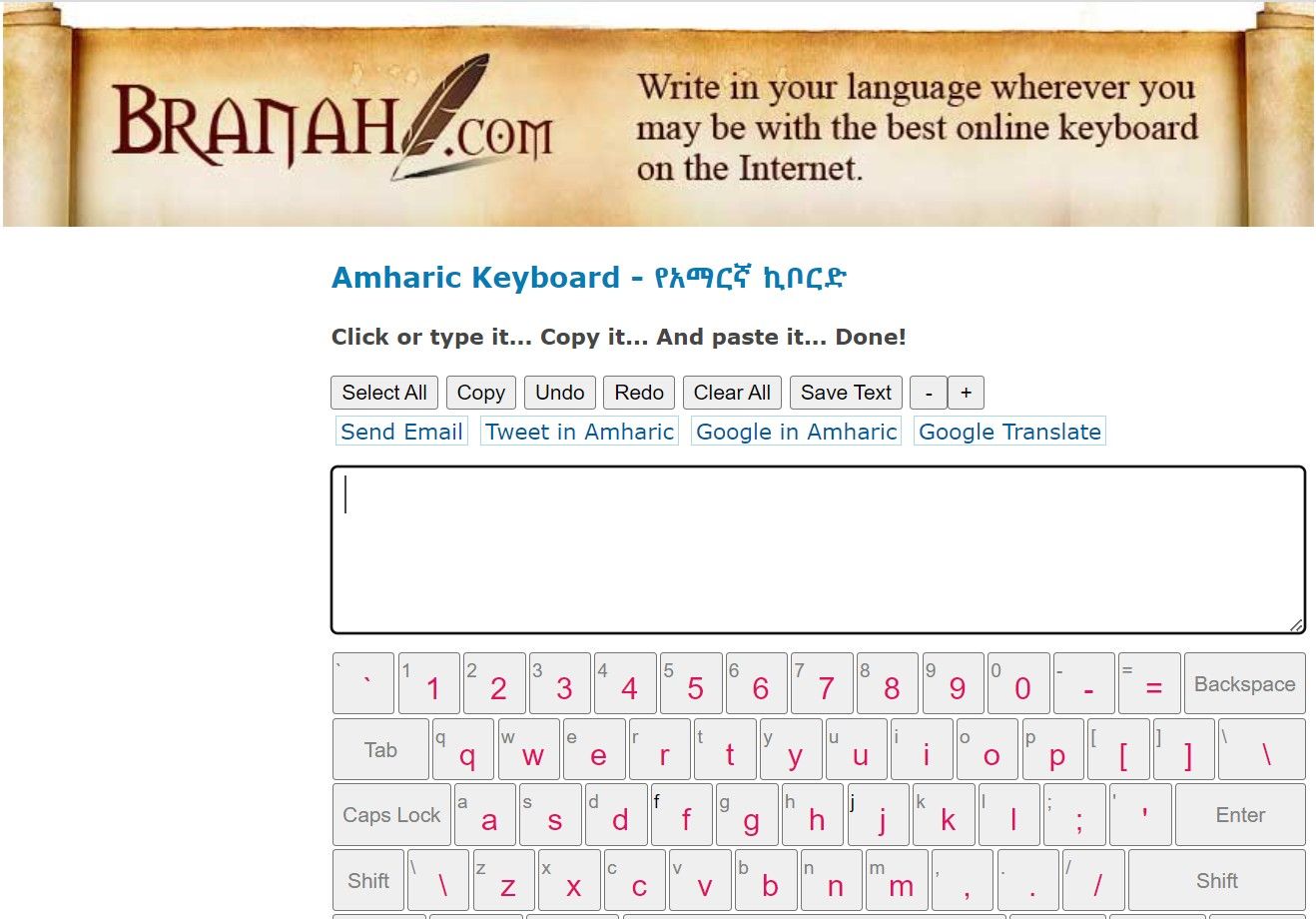 The Branah keyboard is a Qwerty keyboard that features a clean interface and offers a simple way to type Amharic letters from a layout you’re already familiar with. You can use your keyboard or mouse to select letters.

There are 3 different keyboards to choose from, and switching between them can be done with the click of a button.

The creators have included a user guide at the bottom of the keyboard, which is lucky, as this one takes a little getting used to.

Another neat feature is the ability to save your text in a text document.

The website is a bit dated and unattractive, and you have to scroll to get to all of the letters – something that would be clunky and frustrating on smaller devices, or if you want to type long text. But there are a couple of neat features that make it stand out.

For instance, we like that the clickable Amharic letters are arranged in alphabetical order, with each letter variation listed in a row, while the corresponding English letters accompany them. This helps to eliminate confusion and sheds some light on how the Amharic alphabet works.

This keyboard, like the one before it, also has a “save text” function.

Maybe you have sensitive text you don’t feel comfortable typing into a website, or you want to type on your computer while offline, without having ads or pop-ups interrupt you.

In that case, you’ll want to download an Amharic keyboard program specifically for your PC, laptop, or Mac. These are a great solution for those who want to type in Amharic regularly, or for people who want a little more control over their text.

The Keyman Amharic keyboard is the leader in foreign keyboards, providing a software program that allows users to type in Amharic using the Latin alphabet.

This is a download that must be installed on your device, whether that be mobile or desktop (yep, it works on all operating systems – Windows, Android, iOS, and even Linux).

The Keyman Amharic keyboard uses the SERA transcription method to convert the Ge’ez script into Latin characters. This method is based on keystrokes that are easy to remember because they have phonetic associations.

The Keyman Amharic keyboard also comes with the Ge’ez fonts you’ll need, so you don’t have to download anything else. Once installed, the software will automatically configure your system, and you’ll be able to type in Amharic almost anywhere online, including Facebook, Twitter, and email!

These days, we do much of our text communication on our phones – whether that be sending a quick message to a friend, or typing out a long email on the go. So it makes sense that we would want a keyboard app that is optimized for our mobile devices, and that includes all of the letters in the Amharic alphabet.

Now, although there are lots of free Amharic keyboard apps on the market, most of them aren’t very good. Many of them are full of ads, don’t work well, are missing some older letters, or want to steal your data. And with so many of the offerings in the Play store filled with fake, glowing reviews, it can be hard to know which app to trust.

That’s why we’ve done the legwork to find the best Amharic keyboard app for Android and iOS that’s free, safe to use, and does what it’s supposed to do.

Does Apple have an Amharic keyboard?

You’re probably thinking, why would I go to all that trouble installing a third-party application if Apple already has an Amharic keyboard built into their devices?

Well, you’d be right in asking that, because Apple does indeed have an Amharic keyboard built into iOS. It may be very basic, but it works great.

It’s also really easy to install, as well. You simply add Amharic as one of your preferred languages, then add the Amharic keyboard in your keyboard settings. Switching between English and Amharic can be done very easily by pressing the globe icon on the onscreen keyboard.

If you have an Apple device, we recommend using their native keyboard where possible.

For everyone else, or for those who want some extra features, one of the third-party Amharic keyboards below will be a better fit. 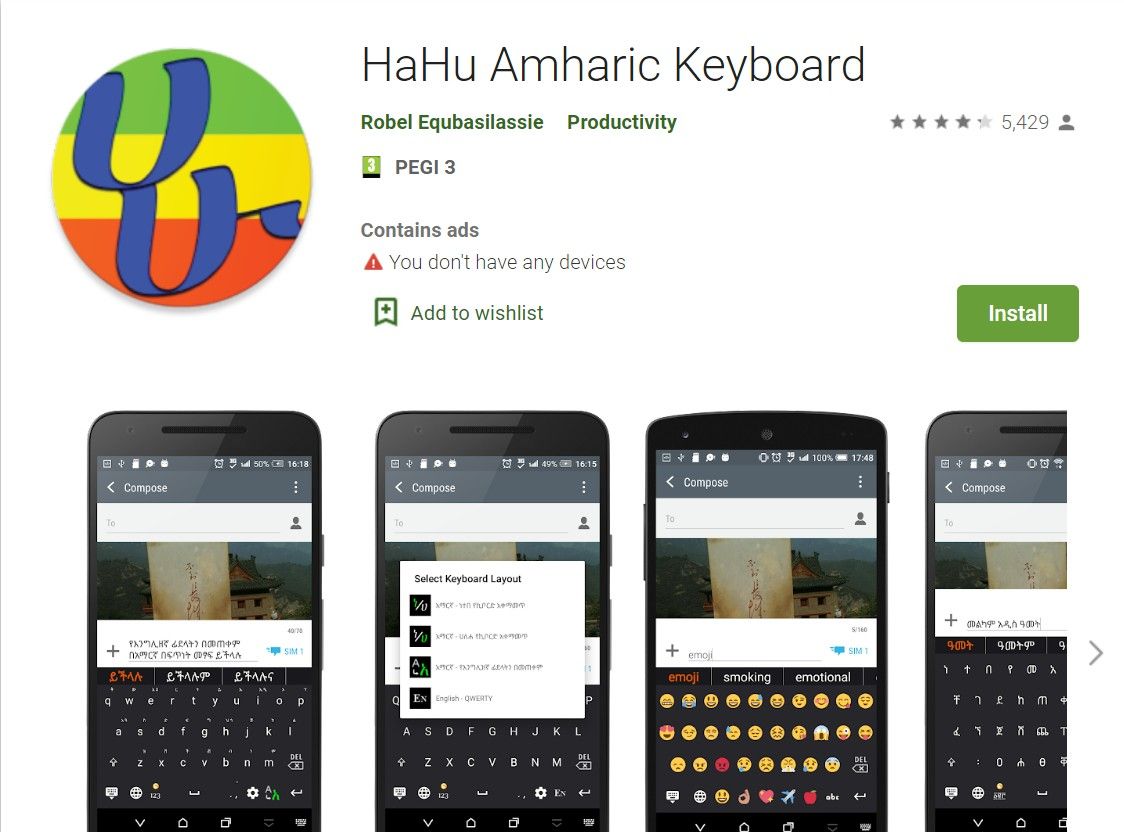 The HaHu Amharic Keyboard lets you type in Amharic on your Android device, quickly and easily. It has both English and Amharic layouts, and you can switch between the two with ease.

There are 4 Amharic keyboard layouts to choose from, and the app will suggest words as you type (predictive text). You can also use emoticons and select from 4 different fonts.

Over 300 Amharic fidels are included, so you can say virtually anything you want. You’re even able to change the theme of the keyboard to better suit your taste. 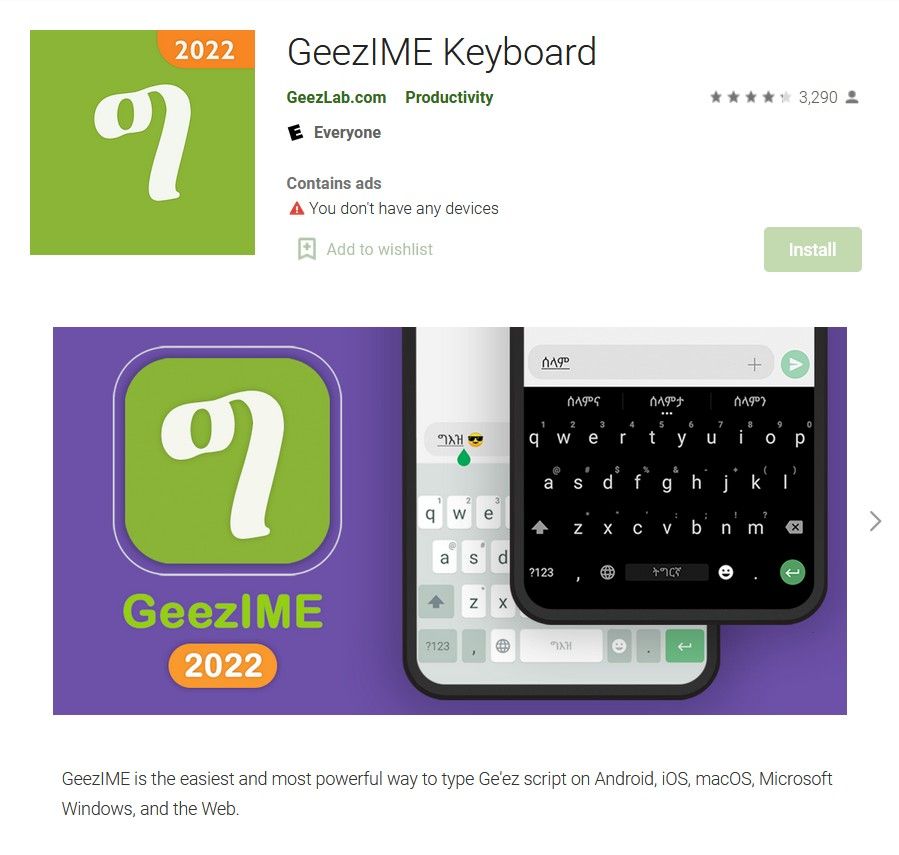 The GeezIME Keyboard app is a great option for typing in Amharic online and off on an iPhone or Android due to its many features.

Second, it uses a consistent typing system across all of its platforms so that you can easily switch between them. Additionally, the GeezIME keyboard suggests words as you type and includes hundreds of emojis and national flags.

Some of the awesome features include full support for English and other popular European languages, the ability to switch between languages with one button, full support for Geez punctuation marks and numerals, elegant keyboard themes and input styles, and more.

For a multi-platform Amharic keyboard app, the GeezIME Keyboard is hard to beat! 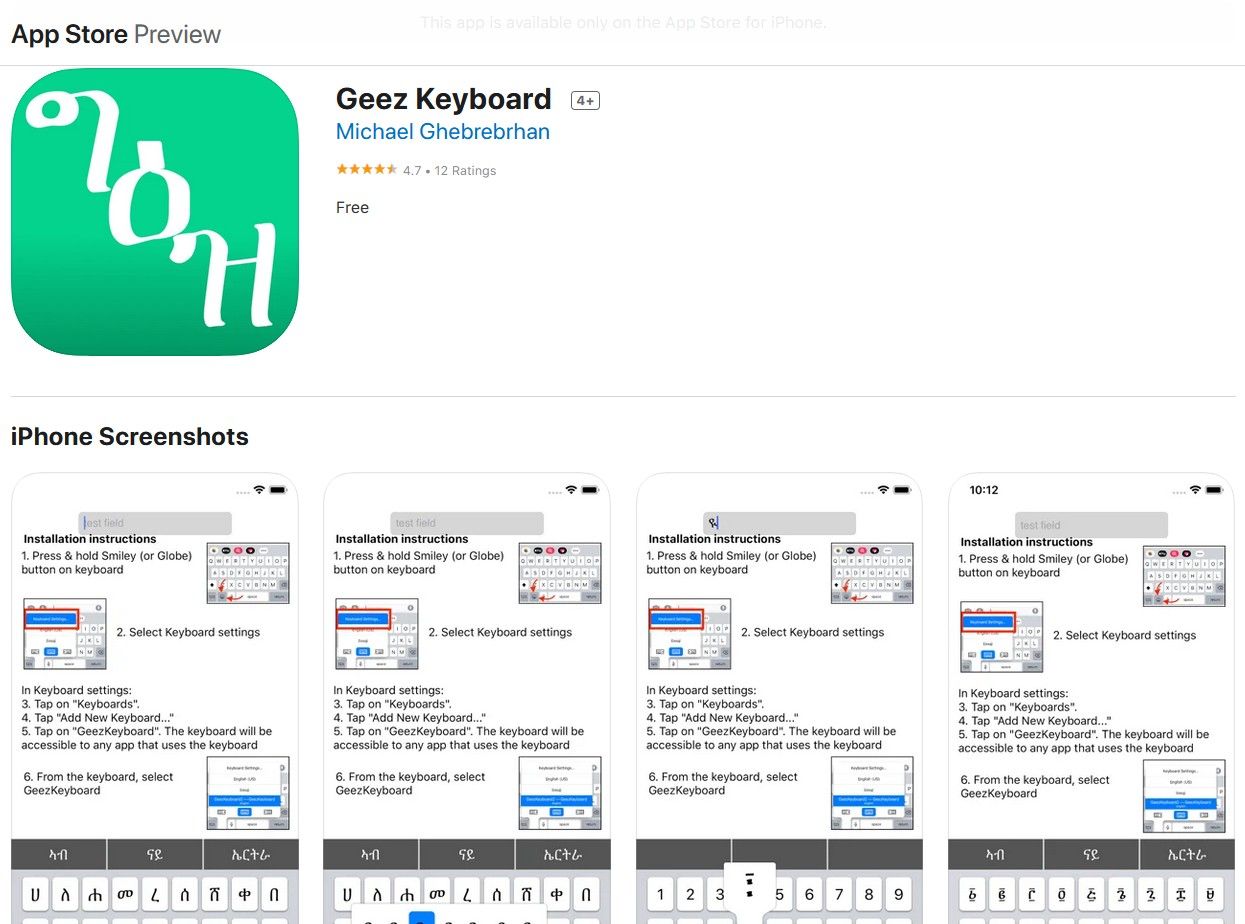 For a simple, free Amharic keyboard for the iPhone/iPad that has no unnecessary bells and whistles, the Geez Keyboard app is a great option.

It includes all seven forms of each letter as well as numbers and punctuation. As you type, suggested words appear for you to choose from.

This keyboard app also includes less commonly used Ge’ez letters which can be accessed by hitting the Shift key (the up arrow key). These letters are often missing from other keyboards.

What’s more, it works on all of your favorite messaging and social media platforms.

All in all, the Geez Keyboard app is straightforward, clean, and easy to use – perfect for those who just want to type in Amharic without any fuss.

That pretty much sums up our picks for the best online keyboards and apps for typing in Amharic. As you can see, there are quite a few options available, so you’ll probably want to test some out until you find the one that’s right for you.

Want some tips on the most effective way to learn Amharic? Then check out our article The Best Ways to Learn Amharic.