If you’re interested in learning Amharic, there are plenty of great YouTube channels to help get you started. Naturally, they’re all free to watch, making them ideal for those who want a gratis introduction to the language.

Wading through the dozens of channels out there can be daunting, so we’ve put together a list of the best Amharic YouTube channels, to help get you started on your language-learning journey.

As each of them has its own unique approach to teaching Amharic and covers different topics, we’ve provided a brief description of each to help you choose the right channel(s) for you.

Amaregna Le Hulum is a great YouTube channel for those looking to learn Amharic. The channel features 28 videos, all of which are between 3 minutes and 15 minutes long.

The videos mainly teach key vocabulary but also include lessons on the Amharic alphabet and a handful of short stories in Amharic, including Bible stories.

All videos use colorful animations and native audio, making them great for both kids and adults.

Our only complaint is that the videos don’t include the Latin versions of words. Overall, though, this channel works as a great introduction to the language.

Ethiopian Language is also another great channel for those looking to learn Amharic. This channel has dozens of videos, ranging in length from 3 minutes to 2 hours!

The topics covered include basic vocabulary, common phrases, Amharic grammar, and verbs. Some of the videos are more geared toward Amharic speakers learning English, but they work both ways.

The longer videos are like recorded live lessons, where a native speaker walks you through all the different phrases, playing an English version of the sentence multiple times, followed by the Amharic.

This is an incredibly comprehensive channel and a great resource for anyone interested in learning Amharic.

How to Speak Amharic

You’ll find a wealth of helpful videos on the How to Speak Amharic YouTube channel. Though the channel hasn’t been updated in a while, there are nearly 50 videos available to get started with. The average length for each is 6 minutes.

Topics covered include common vocabulary, verbs, nouns, and phrases. And in each video, a native speaker introduces new words or terms in clear English, with accompanying text on the screen in English, Amharic, and phonetic Latin spelling.

Lessons are easy to follow and pleasant to listen to, making this channel a great resource for anyone new to the language.

With over 100 videos, Learn Amharic Ethiopian Language is one of the most comprehensive YouTube channels for those looking to learn Ethiopia’s national language.

The channel features short, bite-sized videos, almost all of which are under 3 minutes long. The videos cover a wide range of topics, including Amharic slang and sayings, common vocabulary (animals, body parts, etc.), useful phrases, and the alphabet.

They also have jokes in Amharic, which are great for a laugh while also testing your newfound language skills.

If your focus is on learning the Amharic alphabet, then ASTA Tet Kids is the YouTube channel for you. With over 70 videos, this channel is regularly updated and features videos that are an average of 10 minutes long.

The videos are primarily dedicated to breaking down the Amharic alphabet and the different forms the letters take. This is valuable, as the Amharic alphabet/writing system can be one of the more difficult aspects of Amharic to wrap one’s head around.

The videos are animated with music, though the video and audio quality could be better. That said, they’re still great for kids and adults alike.

With well over 100 videos, Amharic4Ras has plenty of content to help you learn Amharic. Most of the videos are short, under 2 minutes, and cover a wide variety of topics, like the Amharic alphabet, key words and phrases, and numbers.

This channel is aimed at people following the Rastafari religion, so many of the videos are about Rastafarian and Ethiopian culture, including important historical figures. There’s also a heavy focus on the Bible and Amharic words related to that.

The audio quality could be better, and the videos are a little garish to look at, but the content is useful. If you’re interested in learning Amharic with a focus on Rastafarian culture, this is the channel for you.

Okay, so this isn’t exactly an endorsement of a channel per se, but a specific video on the Eko Languages YouTube channel. The Learn Amharic While You Sleep video is a humongous 8 hours long and features hundreds of useful Amharic words and phrases.

The video is designed to be played while you sleep, with pleasant music in the background and on-screen text showing the Amharic spelling of the word, followed by the Latin spelling, followed by the English translation.

Many of the most important and commonly used Amharic words and phrases are covered, making this an invaluable resource for anyone trying to learn the language.

Now, whether or not you can learn a language while you sleep is still up for debate. But if you’re willing to give it a shot, this video is a great place to start.

As you can see, there’s lots here to get you well on your way to becoming fluent in Amharic. Obviously, we couldn’t cover every single Amharic educational YouTube channel out there, but these should give you a good starting point.

So, what are you waiting for? Start watching and learning today!

Also, check out our Everything You Need to Learn Amharic resources page, where you’ll find books and courses to help you learn the language. 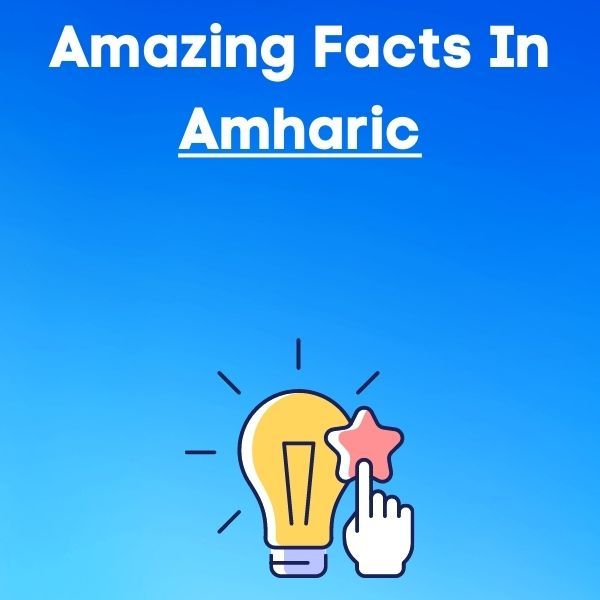 24 Amazing Facts In Amharic For Beginners (With Audio)