The Best Ways To Learn Amharic

We’re going to assume that you’re already aware of the stark differences between Amharic and European languages. Amharic is a Semitic language, belonging to the Afro-Asiatic family. It’s written using a unique script called Ge’ez, which is completely different from the Latin alphabet that’s used in English.

For someone who’s only used to dealing with the Latin/Roman alphabet or with a language that has plenty of cognates (words that are similar in both languages) in English, it’s often difficult to know where to start when trying to learn Amharic.

In this article, we’ll give you a few tips on the best ways to pick up the language, from learning the alphabet to having a conversation.

A note before we start: We’ve presented the information as a step-by-step guide, starting from the easiest methods and progressing to the more difficult ones. But naturally, the best way to learn Amharic depends on your learning style and how much time you’re willing to commit to the language.

Some methods may work better for others than for you – it’s all about finding your groove and sticking with it.

Step One: Learn key Amharic phrases through audio with transliteration

Many will tell you that you should start with the alphabet when learning Amharic, but we say that the best way is to learn key phrases first, using audio that’s accompanied by both the Amharic script and a Latin transliteration.

The truth is, you could spend weeks learning the Amharic alphabet and still not be able to read, write or speak a single word! There are hundreds of characters, which can be extremely daunting for a beginner.

Learning some key phrases first – greetings, question words, common, everyday vocabulary, etc. – using an app or program that provides native audio alongside the Amharic and Latin transliteration, will put you in a much better position to start learning the Amharic writing system later on.

This method will not only get you speaking basic Amharic relatively quickly, but it’ll ease you into the Ge’ez script. 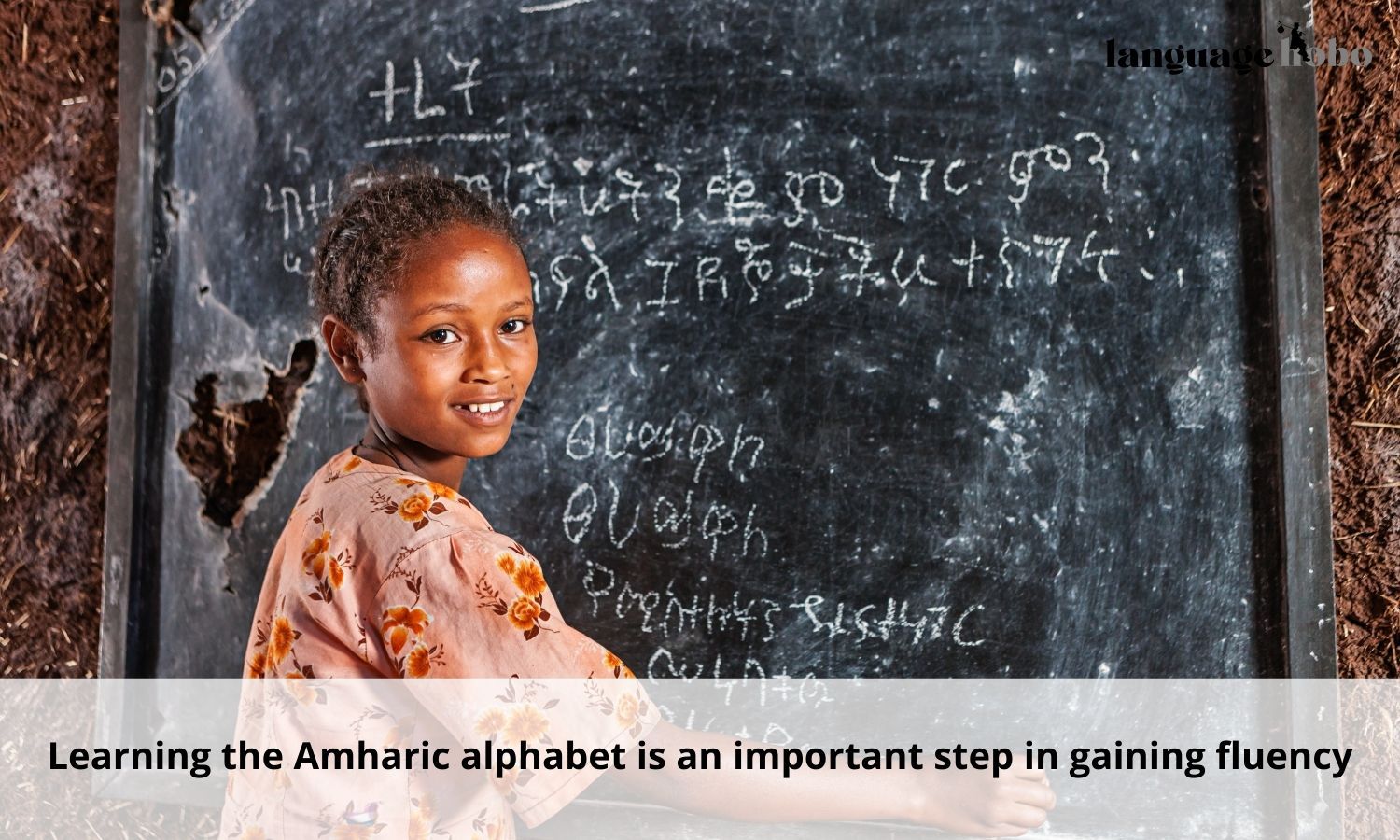 You could, in theory, learn to speak Amharic without ever having to learn the Ge’ez script. That is, after all, how children initially pick up their native language.

However, this would severely limit and restrict you from achieving true fluency, not to mention you’d have difficulty navigating around Amharic-speaking countries if you can’t read signs, menus, etc.

Thus, we advise taking a slow and steady approach to learning the Amharic writing system. Start with the basic letters/symbols, of which there are 34. Make them your obsession! Get to know them inside and out, not just the way they look but how they sound and how they’re written.

Each of the letters has 7 different forms (some have 8), changing according to the vowels used with it, so you’ll need to learn all of these next.

Getting a good Amharic alphabet tracing book or some downloadable worksheets is a great way to practice writing the Amharic letters. 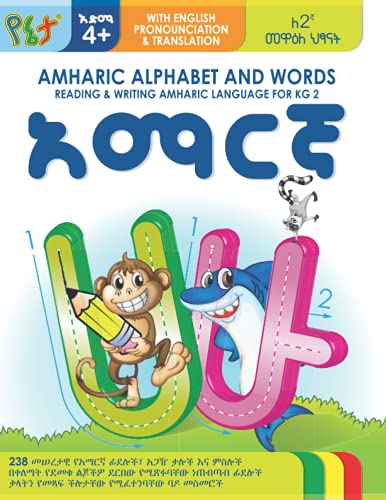 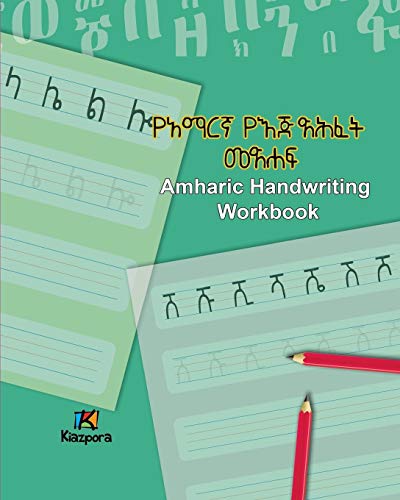 Now that you know the Amharic alphabet and can recognize and pronounce almost any word you see, it’s time to start constructing your own sentences. For this, you’ll need to learn some basic grammar.

The good news is that Amharic grammar is not nearly as complicated as you might have thought it would be.

While apps and audio courses are great for learning how to speak the language, you’ll probably want a course/grammar book to help you understand grammatical rules.

The book below delves into Amharic grammar in an easy-to-understand way. 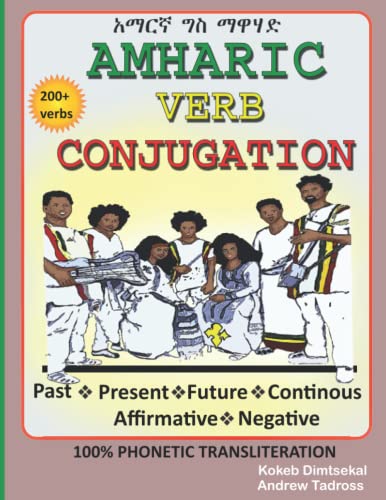 Step Four: Sign up for a conversational Amharic class 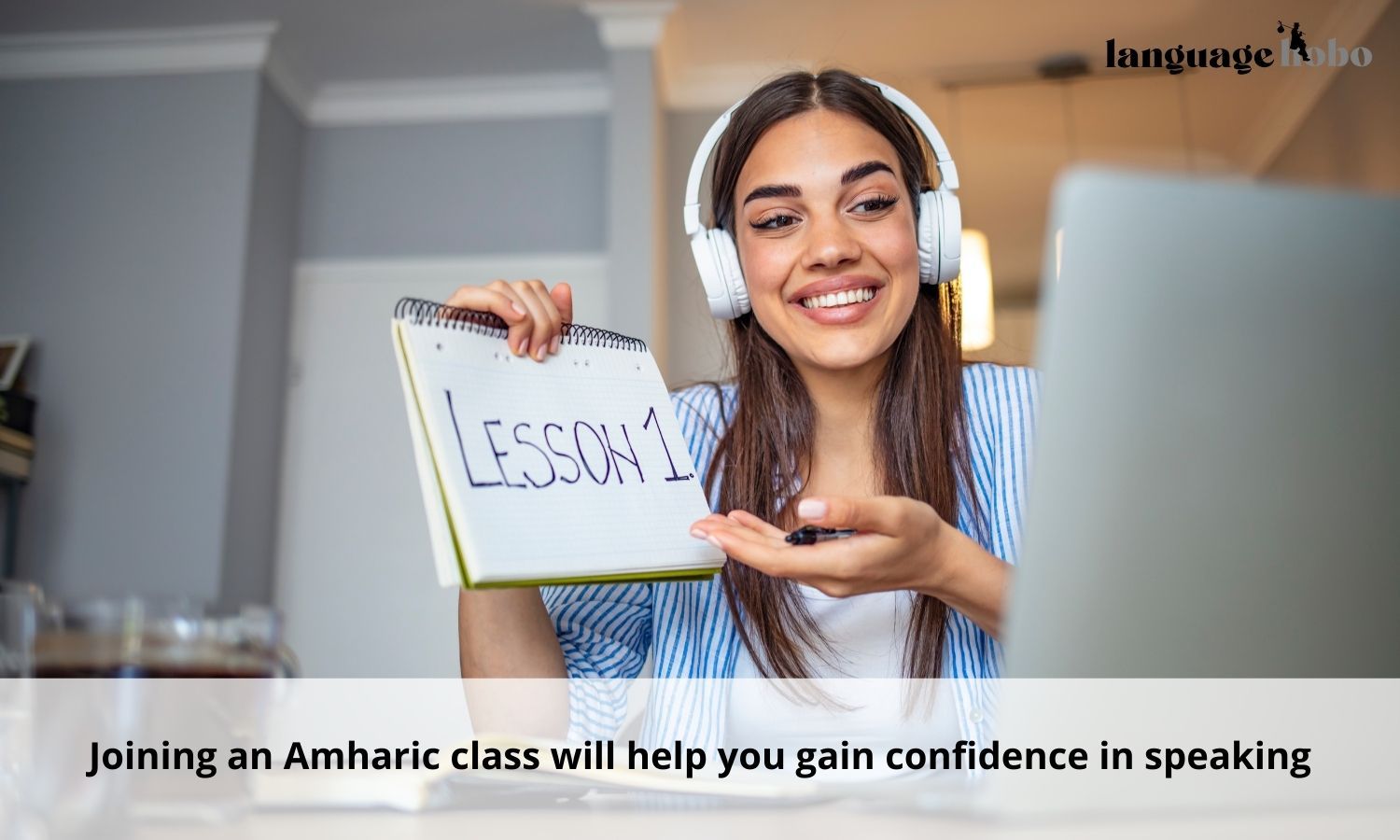 One of the best ways to gain confidence in speaking Amharic is to enroll in a conversational Amharic class. Immersion is key when it comes to language learning, and for the vast majority of people, an Amharic language class is the easiest way to achieve it.

In a conversational Amharic class, you’ll be able to practice the language in a supportive and encouraging environment with fellow students who are equally as enthusiastic about the language as you.

You’ll have the opportunity to make mistakes, ask questions, and receive feedback from a qualified Amharic teacher.

The odds of you finding in-person Amharic classes in your city or town are slim (unless you live in major Ethiopian hubs like Washington DC and London), but an online Amharic course can be just as effective. Not to mention cheaper.

Step Five: Get an Amharic tutor or speaking partner

Not a fan of group classes? Or maybe you’re on a tight budget and can’t afford a full course right now.

No problem. You’ve got options!

One-on-one language tutoring is an excellent way to learn Amharic, especially if you’re shy or you want a more personalized learning experience. When you’re the only student, your teacher can tailor lessons to your specific needs and goals.

italki is a great resource for connecting with an affordable, native Amharic tutor from the comfort of your home, via your phone or computer. These are professionals who have been through it all before and know exactly how to help you succeed. Prices start from as little as $12 per hour.

If you want a more informal experience and don’t want to spend any money, Tandem, the free language exchange app, would be right up your alley. With Tandem, you can connect with Amharic speakers from all over the world who want to learn your language too. 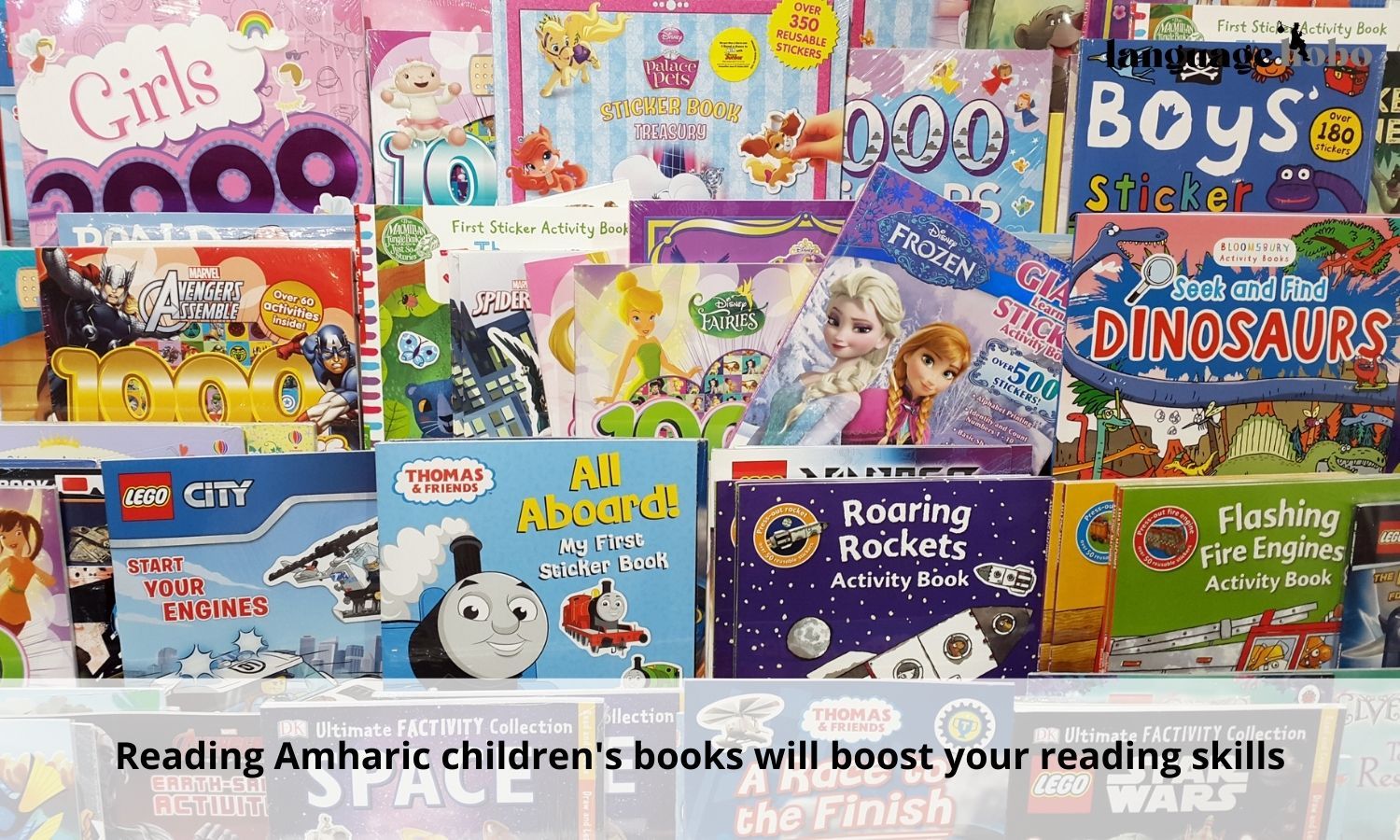 The next stop on your language journey will be to consume some native-language content. And what better way to do that than with Amharic children’s books?

There are plenty of Amharic books out there written for native children, which makes them ideal resources for beginners who want to learn the language in a fun and engaging way.

One of the best things about Amharic children’s books is that they’re usually pretty short, so you won’t feel overwhelmed or bogged down as you would reading a novel. Also, they use simple language that’s easy to understand, making them the ideal native content starting point for language learners.

Check out some of the Amharic-language kids’ books you can buy online, or have a look at our list of the top Amharic books for beginner readers.

At any point in your journey, you can (and should) start watching some Amharic-language TV series. Movies are good, but the shorter format coupled with the serialized, almost repetitive nature of TV shows makes them an excellent resource for language learners.

By watching Amharic TV shows, you’ll be exposed to the language naturally and authentically. You’ll also pick up slang and idioms, which will come in handy when communicating with Amharic speakers in the real world.

This won’t be an easy feat, especially not at the start of your journey. But it’s good to get used to the sound of the language as early as possible. You’ll usually be able to follow along after watching a few episodes, and before long, you’ll be surprised at how much Amharic you know. 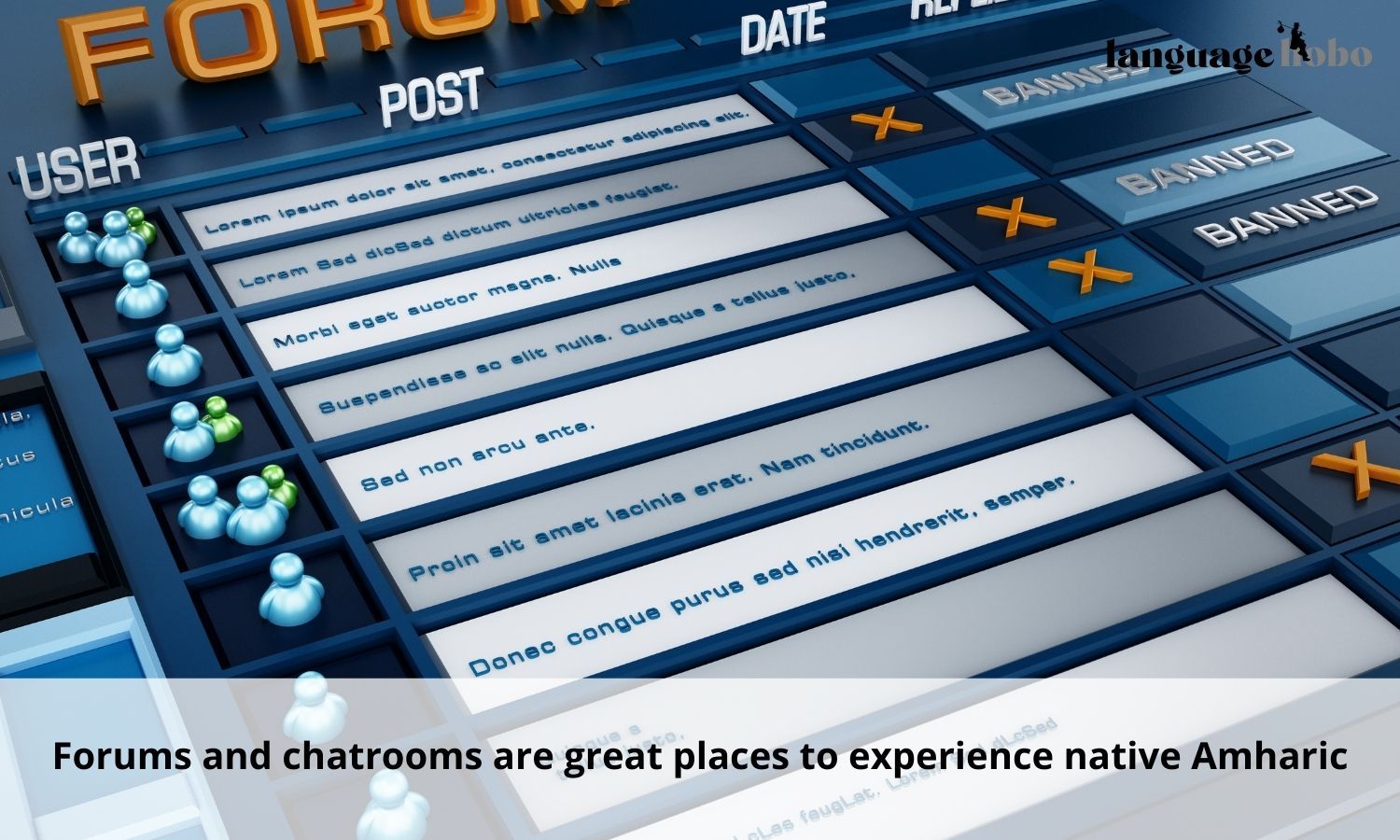 One of the best ways to practice your Amharic skills is by joining an Amharic forum or chatroom. These are spaces for natives to talk about every topic you can imagine, so be prepared to be surrounded by colloquial Amharic at all times.

You probably won’t be able to contribute for a while, but you’ll see genuine, living Amharic in action, which is invaluable for language learners.

Practicing your newfound skills with a tutor is one thing, but try practicing on unsuspecting Ethiopians you meet in the real world! This will be the ultimate test of your abilities and is probably the most difficult task on this list.

If you can’t visit Ethiopia, there are small Amharic-speaking hubs in major cities across the world where you can find natives. The best places to find them are in Ethiopian shops or restaurants.

Consider greeting them or ordering food in their language the next time you’re there; you’ll both shock and delight them (and they might even spark up a conversation with you).

The best way to learn Amharic is to fully immerse yourself in the language whenever you can, in multiple ways, to hone all 4 language skills.

Every step on this list will help you move closer to your goal of becoming fluent in Amharic. Even if you don’t follow the guide to the letter, try to incorporate as many as possible into your language learning journey.

Wanna learn more about the Amharic language? Check out our post What is Amharic?