Table of Contents show
1 How many languages are there in the world?
2 What is mutual/asymmetric intelligibility?
2.1 How is mutual intelligibility possible?
3 What you need to know
4 8 must-learn languages to communicate with the world
4.1 English
4.2 Sanskrit
4.3 Mandarin Chinese
4.4 Latin
4.5 Arabic
4.6 Russian
4.7 Malay
4.8 German
5 Honorable mentions
5.1 Swahili
5.2 Korean
6 Wrapping it all up

Wouldn’t it be wonderful if you could go anywhere in the world and be able to speak to almost anyone you come in contact with, and be understood? Wouldn’t you like to be able to read almost any text you come across and understand at least the gist of it?

That sounds impossible, right? Well, technically it is. And I admit that the title of this article is a slight exaggeration. But bear with me, because all is not lost.

How many languages are there in the world?

According to Busuu, there are over 7000 spoken languages in use today. This number likely doesn’t include the numerous sign languages used across the globe either, so add an extra 300 or so to that figure.

I think you’ll agree that that’s a staggering amount of languages to learn; an impossible feat for anyone to complete in one lifetime. You’d probably need about 1000 lifetimes to manage that!

But what if I told you that you could communicate, at least superficially, with more than 75% of the global population learning just 8 languages? Sounds too good to be true, doesn’t it?

Well, it’s completely achievable with a very neat language hack (that isn’t really a hack). Ladies and gentlemen, I present to you… mutual intelligibility. 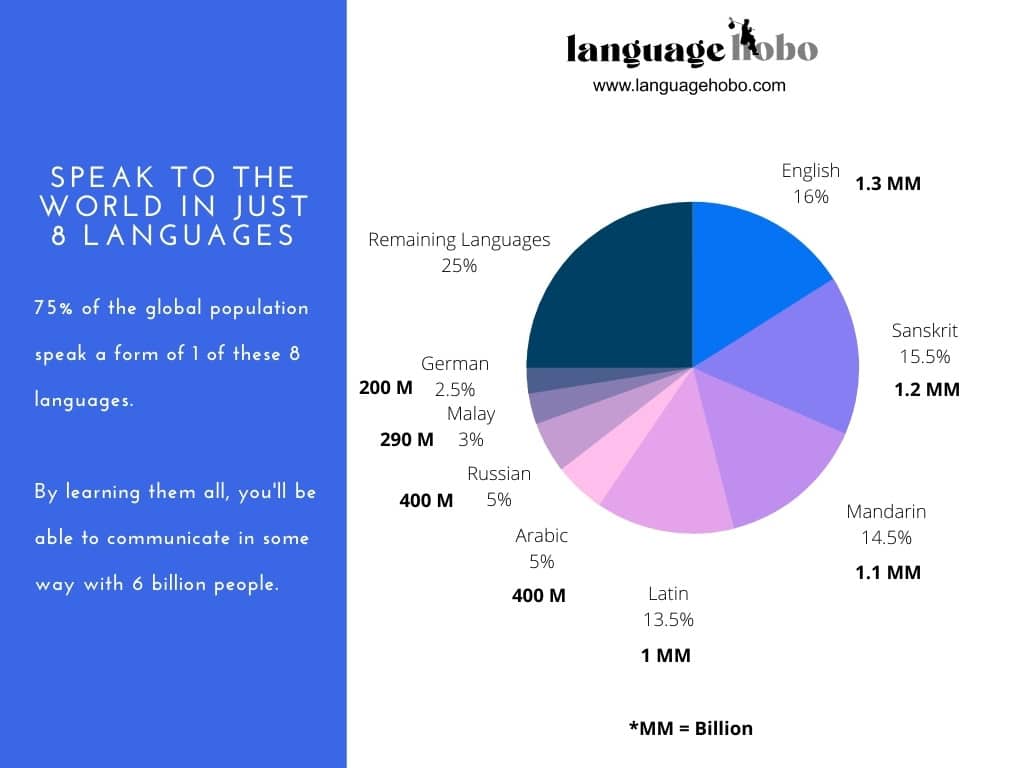 It’s what some in the language learning space like to call a “language discount”, and enables people to listen in on, and make sense of, conversations in another language without difficulty — even if they don’t speak it.

Example: Dutch and Afrikaans. Afrikaans is so closely related to its parent language, Dutch, that there’s said to be roughly 95% mutual intelligibility. Meaning, with little effort, speakers of both languages can understand each other.

How is mutual intelligibility possible?

Language similarities occur when languages are formed from the same root/parent language. This is usually a product of migration, where speakers of the root language move to different areas and their use of the language evolves naturally.

Many of these child languages often get influenced by other neighboring languages; and gradually, over time, become distorted and separate from their ancestor, whilst maintaining many of its features.

It is this parent language that we can use to our advantage, in order to communicate with as many people as possible.

What you need to know

For this to work, you need to think in terms of roots and language siblings: i.e. which languages will give the biggest bang for your buck.

This is about learning languages that are similar to many others – whether mutually intelligible or related in some way. This way, you get a language discount on all the others.

Now, you won’t be able to hold deep conversations with everyone you meet, but with knowledge of these 8 languages and a little bit of intuition, you’ll be able to piece together sentences in many similar languages to get your point across.

8 must-learn languages to communicate with the world

Are there any mutually intelligible languages with English?

English, like many other languages, has no mutually intelligible cousins. The closest language to English is Frisian, a Germanic language spoken in Holland and Germany.

With over 15% of the world’s population able to speak and understand at least some English, learning it is a no-brainer.

English is the current lingua franca, the go-to language for many whose native languages are too hard for foreigners to learn. 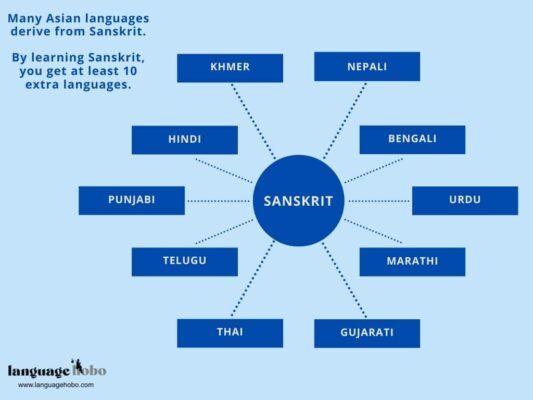 Sanskrit, the oldest living language in the world, is the mother of many Indo-Aryan languages, including Hindi. Although not many people speak it today (15 thousand), it will enable you to converse with most of India and neighboring countries.

Learning Sanskrit lets you communicate with 15% of the global population, and makes traveling around India and its neighbors much easier. You’ll be able to read and understand the scripts of many South Asian languages, as they’re based on Sanskrit.

Where is the language mostly used: China

Mandarin is spoken only in China, though it accounts for a staggering 14% of the population.

It is one of two languages on this list that doesn’t really offer you any language discounts… in terms of speaking, that is.

In writing, however, seeing as Japanese uses Chinese characters (Hanzi), it is actually possible to understand written Japanese and the gist of a sentence, though you won’t be able to pronounce any of it.

So, you could essentially write down a Mandarin sentence on a piece of paper, hand it to a Japanese speaker, and be understood without exchanging any spoken words. I’d say this constitutes a language discount. 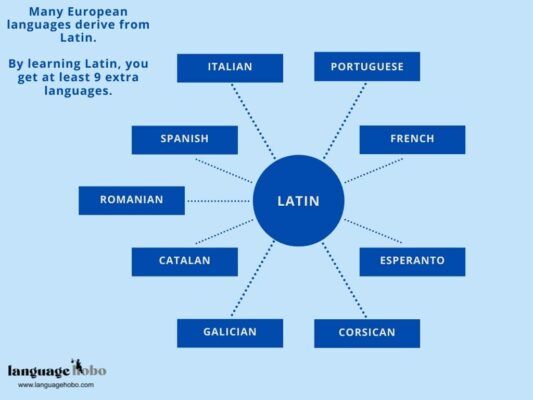 Latin, the mother of the romance languages, although dead, will give you the best language discount, if you choose to learn it over, say, Spanish.

Much of the romance language vocabulary is directly descended from Latin, and you’ll be able to easily understand a concept in any of the descendant languages if you know the Latin root word.

Take the verb “to smile”. You can see how similar the word is across the romance languages:

That’s a whopping 7 major languages you get for the price of one, plus several minor languages added on as a bonus: Catalan, Galician, Corsican, and Esperanto.

That’s around 13% of the global population you’ll be able to communicate with in some way.

Where is the language mostly used: Middle East, North Africa

Arabic is the second language on the list that doesn’t really give you a language discount, as it isn’t closely enough related to any other languages to be of real benefit.

However, the sheer number of speakers and the widespread use of the language make it a must-learn.

Many dialects have developed over the years in different countries. As such, some insist that they are all distinct languages and not just dialects of Arabic. However, learning Modern Standard Arabic, the language in which the Quran is written, will open the doors to all of the other kinds.

In a wider sense, Arabic and Hebrew are said to have similarities, as they both come from the same parent language – Aramaic. You’ll be able to spot familiar Hebrew words, though they might be pronounced differently.

In addition to this, other languages, such as Persian/Farsi, Pashto, Kurdish and Urdu use an adapted form of the Arabic alphabet, making them far less daunting to read and understand for the person who knows Arabic. 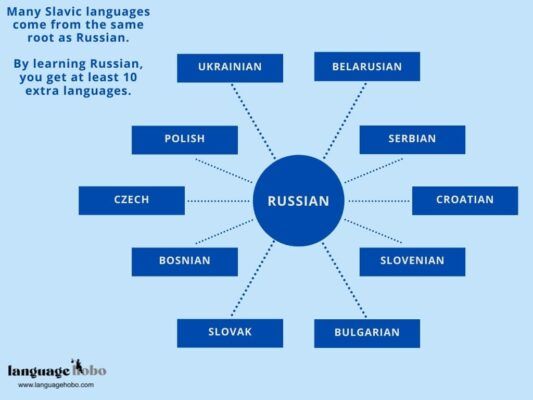 Where is the language mostly used: Eastern Europe and The Balkans

Russian is the most widely spoken of the Slavic languages, and although written in the Cyrillic alphabet, spoken and Latin-transliterated Russian shares many similarities with other Slavic languages.

With your Russian skills, thanks to the mutual and quasi-mutual intelligibility of Slavic languages, you’ll be able to gauge the meaning of many of the words you hear across Eastern Europe.

What’s more, being able to read and pronounce the Cyrillic alphabet opens up the door to pronouncing other languages that use it but aren’t necessarily Slavic in nature. Kazakh and Macedonian, for example.

Where is the language mostly used: Malaysia, Indonesia, Singapore, Brunei.

Malay is a widely-spoken Austronesian language that, although there are some differences, is pretty much the same language as the Indonesian spoken in Indonesia.

There aren’t many language discounts available from this language, but as speakers account for over 3% of the population, it might be a handy language to have in your arsenal. 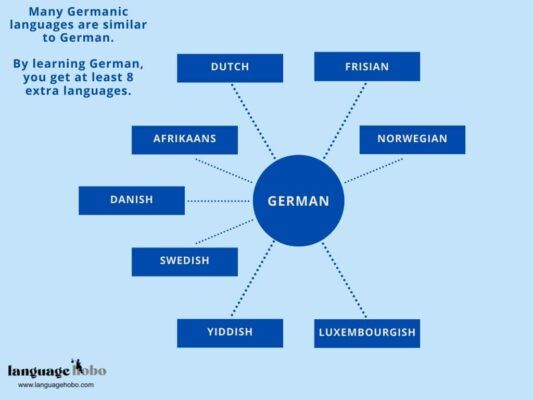 Where is the language mostly used: Western Europe, Scandinavia, Africa

You’ll see much more mutual intelligibility between German and other West Germanic languages, though the North Germanic/Scandinavian languages share many words in common with German.

With your knowledge of both English and German, it makes understanding the Germanic languages far easier.

Although you’ll only gain 2.5% of the global population, it still opens up Northern Europe, many parts of Western Europe (namely Germany, Holland, Belgium), and South Africa.

Swahili, a Bantu language, is the lingua franca of East Africa, spoken primarily in Kenya and Tanzania, but small communities of Swahili speakers can be found in neighboring countries.

To a lesser extent you can get somewhat of a discount on Kinyarwanda, Kirundi, and several other Bantu languages. Lexical similarities are most notably found in nouns.

Where is the language mostly used: North and South Korea

Korean is considered a language isolate, in that it appears to have no relation to any other language, and thus won’t give you any language discounts.

As Korean’s writing system isn’t nearly as complex as the Chinese one, learning Korean first would make many other East Asian language scripts a little easier to grasp, if it is to be your first foray into symbol-based scripts.

Wrapping it all up

I admit, some of these discounts are stretching it a bit, but they’re not as far-fetched as you might think. Don’t underestimate the intelligence of the people around you, and their ability to decode words from related languages.

That’s the magic of etymology: many languages are so closely related that it’s perfectly possible to convey a message in one to a person only familiar with a relative of that language.

By using this method, you make your language list much more manageable (anyone can learn 8 languages in their lifetime), whilst also inheriting dozens of new languages, and billions of potential speakers.