You already know that speaking with natives of your target language is extremely important for fluency. But did you know that you don’t have to leave your home country to find people to converse with? You can find them right on your doorstep, if you know where to look.

Having regular conversations with natives of your chosen language means you get to practice constructing your own sentences, pulling together everything you’ve learned thus far. It also means, and this is crucial, that you will be corrected whenever you make mistakes. Corrections are important, as they teach us how to use the language properly.

If you don’t live in or plan to travel to a country where your target language is widely used, you might have found it difficult to practice your verbal communication skills. Well, I have some good news for you. You don’t have to go far to find speakers, because chances are, they’re just a stone’s throw away, in places you might never have thought to look.

Note: If you want to see this method in action, check out the popular YouTube polyglot Moses McCormick, who’s famous for randomly finding speakers for his many languages in his hometown.

When people migrate to new countries, they often move to areas and neighborhoods where their countrymen and women already live, for ease and familiarity. This creates small enclaves of people speaking the same language, practicing the same cultures, etc.

These areas exist everywhere, and you can find almost any language you’re learning in your home country by doing a mere Google search. Wikipedia usually lists demographic information.

Example: If you’re learning Polish and you live in the US, a simple search shows that there are large Polish populations in the states of Illinois (Chicago mostly), New York, and New Jersey, though you can find smaller populations all over the States.

Example: If you’ve chosen a language with fewer speakers, like Sesotho (the official language of Lesotho, Africa), you can find around 3,000 in the UK, and 1,500 in Canada.

Country specific grocery stores and restaurants are probably the easiest place to find native speakers, because you can identify which languages the proprietors and many of the customers speak from the name of the establishments themselves.

It should be quite easy to spot a range of ethnically diverse shops and eateries in your city. These don’t always have to be in areas with large numbers of people from those countries, either. It’s possible to find a standalone Korean restaurant in an area where there aren’t a lot of Korean speakers, for instance.

Example: If your chosen language is Turkish and you live in Liverpool, UK, a Google search will reveal that there are no less than 3 Turkish restaurants in the city center alone.

Example: If you’re learning Ethiopian and you live in Brisbane, Australia, you’ll see that there are at least 3 Ethiopian restaurants there.

Just do a search for “X-language restaurant in X-city”, and I’m sure you’ll find something. As a bonus, you’ll also get to sample some awesome new cuisines.

Meetup is a free social networking platform where you can find local communities of people that share the same interests. You can also start your own groups around your interests, if none are available.

Many expats use Meetup to connect with people from their home countries, usually in bars, pubs and cafes. This is a chance to use their native language in places where there aren’t many speakers of it.

Search in your local area or the nearest big city to you, and you should be able to find a group of target-language speakers. Mention that you’re a learner when you join online, just so people know what to expect.

If you live in a city or town with a large international student population, chances are there’ll be plenty of foreign languages flying about. In order to find them, you could check out bars that are popular with students.

Try to find out the percentage of international students who speak your target language and study at one of the educational establishments closest to you. You can do this by searching online.

Example: Manchester University, UK has a total of 238 students from South Korea.

Example: University of Waterloo, Canada has roughly 315 students from Pakistan. 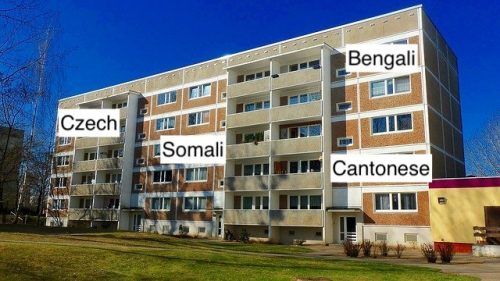 This one’s a little less obvious, and not always possible. If you do, however, live in an apartment, it’s possible that some of the residents are migrants who speak one of the languages you’re learning. You won’t know unless you speak to them.

Large apartment complexes in major cities usually have ethnically diverse residents; it’s not uncommon to find several different languages spoken in the same building. In one of my old apartment blocks, for instance, I regularly heard Russian, Polish, Swahili and Urdu.

The chances that someone in your block speaks the language you’re learning are slim, but it’s worth a shot keeping an ear out for any familiar words. If you do discover that one of your neighbors speaks your target language, hooray! May this be the start of a wonderful friendship.

If you’ve been listening to music in your target language, you will have stumbled upon some artists you like. Many of them tour and perform globally. At such events, you’ll be surrounded by natives who love the music just as much as you do. Here, you’ll have something else in common, along with the language. 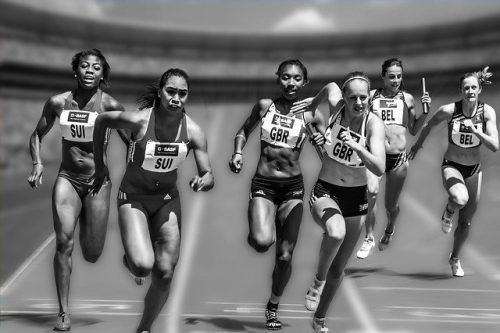 Example: The Commonwealth Games are held in mostly English-speaking countries, namely the UK, Canada, Australia, and New Zealand. They attract participants from 54 countries. That’s a lot of potential supporters to communicate with.

With over 2 billion users worldwide, and a seemingly endless amount of groups to join, you’re bound to find a group of target language speakers in your area.

Like Meetup, Amikumu links you with local people who speak the language you want to learn. You can make your profile, say which languages you speak, then people who speak them can reach out to you, or you can contact them. From there you can arrange local meetings.

This is a free app designed specifically for linking learners with natives. Currently Tandem has speakers in over 300 languages, and adds new ones all the time. You can communicate via text, voice or video chat. Though most users won’t be local, this is still a great way to meet new people and hone your skills. And you never have to leave your house, let alone your country.

I hope this post has given you some ideas of where to find speakers of your chosen language within your home country. These techniques are cheap, easy, and a lot of fun, especially when you (pleasantly) surprise people that wouldn’t expect you to speak their language.

In terms of etiquette, you should always be polite about approaching people, and don’t just assume that they speak a particular language, as that would be rude. You should politely ask if they speak the language before you attempt to converse with them in it.

So, what are you waiting for? Go forth and find some speakers!