How Long Does It Take To Learn Albanian?

It’s always a good idea to get a rough estimate of how long it will take you to learn a particular language. After all, language learning is a commitment and you want to make sure you’re prepared for the long haul.

How long would it take an English speaker to learn Albanian?

It is generally estimated that it will take an English speaker somewhere between 12 – 18 months of dedicated, regular study to learn Albanian to a conversational level.

The FSI (Foreign Service Institute) is an American organization that specializes in teaching high-interest languages to government employees. They estimate that it will take the average English speaker 44 weeks, or 1100 class hours, to learn Albanian. They’ve placed it in Category III, which is their designation for languages that are considered “hard” for English speakers to learn.

However, these times are not set in stone, and how long it takes to learn Albanian will depend on a number of factors. In this article we’ll discuss some of them, plus offer some suggestions on how you can speed up the process.

What factors influence how long it takes to learn Albanian?

The closer your native language is to Albanian, the shorter the learning curve will be. Thanks to English’s Latin roots, as a native English speaker, you’ll have a slightly easier time learning Albanian than you would with, say, Russian or Mandarin.

This is because it is estimated that approximately 60% of Albanian vocabulary is derived from Latin.

Other languages you know

If you already know Latin or one of the Romance languages derived from it (Italian, French, Spanish, etc.), you’ll likely pick Albanian up faster than the average English speaker.

This is because Romance languages are basically modern versions of Latin, so you’ll already be familiar with a good portion of Albanian vocabulary.

Your motivation for learning Albanian

This is perhaps the most important factor when it comes to how long it takes to learn any language. If you’re not motivated, no amount of time or effort is going to make you successful.

On the other hand, if you’re highly motivated and have a real desire to learn Albanian, you’ll be able to pick it up quickly, as you’ll be more likely to spend time with it (whether actively studying or enjoying native Albanian content).

How often you study

Obviously, the more time you spend studying Albanian, the faster you’ll learn it. If you can dedicate an hour or two every day to learning Albanian, you’ll definitely reduce the time it takes to reach fluency. 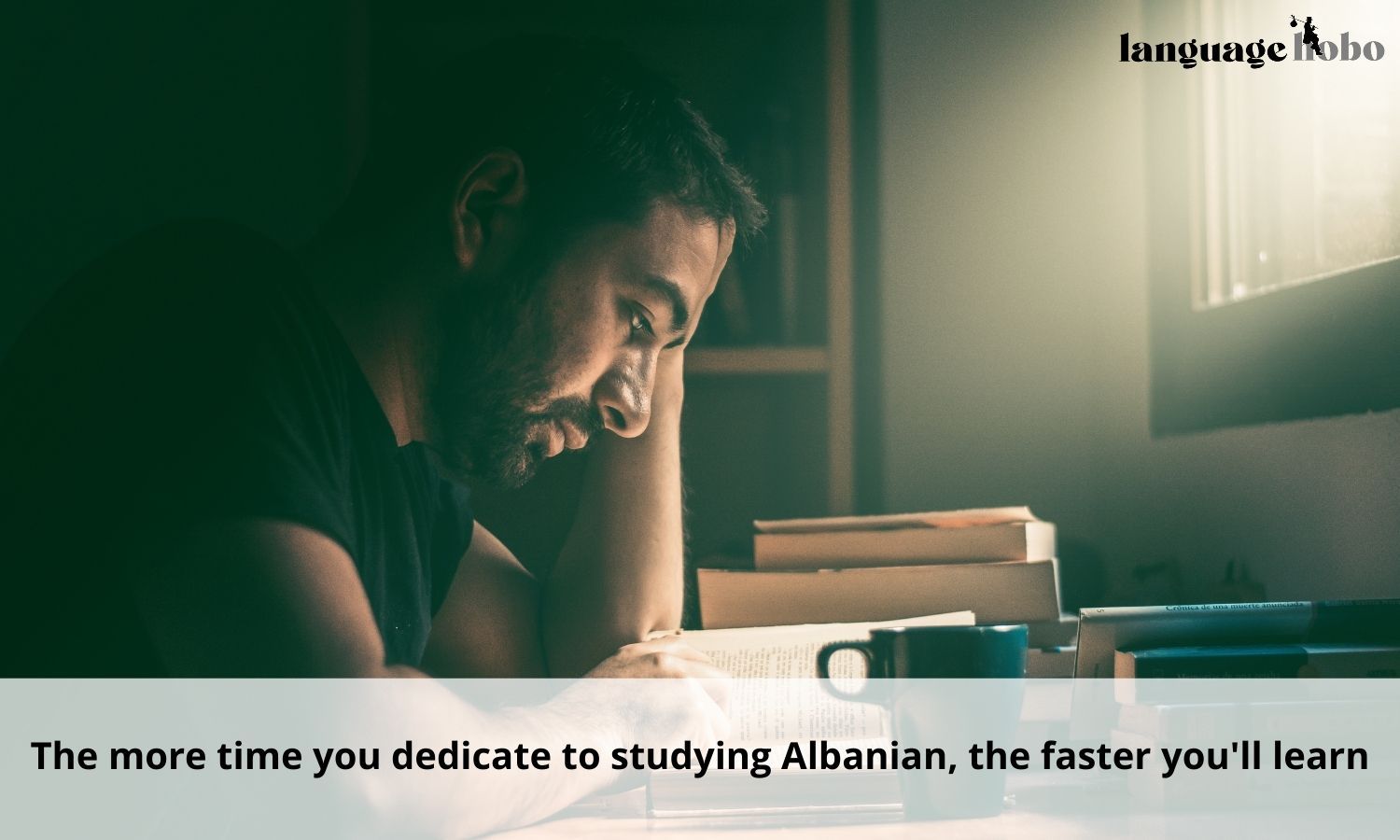 Your approach to learning Albanian

The way you go about learning Albanian will also have an impact on how long it takes you to learn the language. There are a number of different methods and approaches you can take, but some are more effective than others, and that in itself all depends on what type of language learner you are.

For example, some people learn best by listening to audio recordings and repeating words and phrases out loud, while others prefer visual aids such as flashcards or books with lots of pictures.

The key is to find a method that works for you and stick with it. Only then will you see fast results.

How comfortable you are with grammar

Learning grammar rules of a new language can often take up a lot of time, thereby adding to the overall time it takes to reach fluency.

If you’re someone for whom grammar comes naturally, or you’re familiar with the different concepts, you’ll recognize certain patterns in Albanian grammar more quickly and be able to apply them. This will help you progress faster.

The reason being: Albanian has a relatively complex grammar system, and for most English speakers, it will take some time to get used to it unless they’re already familiar with a similar grammar system.

How much native exposure you have to Albanian

Being exposed to the Albanian language on a regular basis will help you learn it faster. If you live in an Albanian-speaking country or have friends or family who speak Albanian, this will give you a big advantage.

You’ll have more chances to speak it, plus you’ll be able to pick up on the nuances and subtleties of the language that a textbook or course wouldn’t necessarily teach. Your exposure will be more natural and thus more likely to stick.

How many foreign languages you already speak

Studies have shown that people who already know multiple languages tend to learn new ones more quickly. The reason for this is that they’re already familiar with the process of learning a language and are thus better equipped to deal with the challenges that come with it.

So, if you’re someone who already speaks multiple languages, no matter which language family they fall into, you can cut a significant amount of time off your Albanian learning journey.

Now that you know the factors that influence how long it will take to learn Albanian, let’s look at some of the ways you can actively speed up the process.

How to learn Albanian fast

There’s no getting around it: learning Albanian is going to take time. It’s a brand new language – of course it will! However, with enough motivation and a solid learning approach, you can definitely quick progress.

Ready to start? We’ve got a few posts to help you along: