Although it’s entirely possible to learn how to speak Amharic without learning the alphabet, it’s not recommended, not if you’re aiming for fluency, at least.

Learning to read and write in the language will give you a much better understanding of how the words are put together, and it will also make it a lot easier to learn new vocabulary.

And if that wasn’t enough incentive, you should know that the Amharic alphabet is used all across Ethiopia – on shop windows, restaurant menus, newspapers, etc. Put simply, if you don’t know how to read it, you’re going to have a tough time getting by in the country.

What is the Amharic alphabet?

Amharic uses a writing system that’s based on the Ge’ez script, an ancient Ethiopic script that’s also used for a number of other languages in Ethiopia, such as Tigrinya and Tigre.

Is Amharic an abjad?

An abjad is a type of alphabet where each letter represents a consonant sound, with no inherent vowel.

Therefore, Amharic is neither an abjad nor an alphabet but an abugida made up of letters called fidäl. In an abugida, each character represents a consonant+vowel sound, with the vowels being represented by modifying the shape of the consonant glyp.

Is Amharic written left to right?

Yes, Amharic is written from left to right, just like English. In that way, it’s different from other Semitic languages like Arabic and Hebrew.

How many letters are there in the Ethiopian Amharic alphabet?

Due to how the writing system functions, there are over 300 characters/letters in the Amharic alphabet.

Now, this might sound intimidating, and we won’t lie to you, it’ll take a little while to learn them all, but there is a method for learning them that can help to make the process easier.

Depending on who you ask, there are between 33 – 37 basic Amharic letters. 4 of them are quite rare, but you should still learn them because it’s best to cover all bases.

These basic letters make up the consonants in the language – they’re the original form of the letter before the vowels are added.

The best way to learn the Amharic alphabet is by focusing on the basic letters first. By learning and getting comfortable with these at the start of your journey, you can slowly introduce yourself to their altered forms, and this way they’ll make more sense.

Now let’s take a look at the letters. We’ve included the rare letters, forms, and punctuation that are often left out of language learning materials. We’ve also split the letters up into sections for easy navigation, and included (rough) English pronunciation for each of them.

While we did try to make this Amharic alphabet guide as comprehensive as possible, we understand that without interactive study and native audio, it’ll be difficult to remember most of them.

That’s why we recommend using an app or program that can help you drum them into your head. 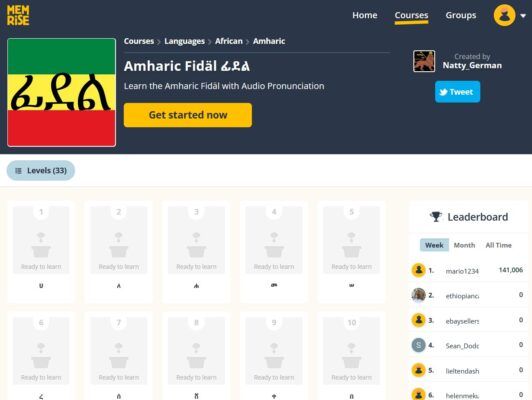 This Amharic Memrise course is free and will teach you the 33 basic Amharic letters and their altered forms. The best part of this is that the lessons come with audio, so you’ll be able to hear the correct pronunciation of each letter.

Consider watching this YouTube video series that teaches the Amharic alphabet using colorful animations and native audio. This would be great for visual learners.

You’ll want a way to type in Amharic, and for that, you’ll need a special keyboard. We’ve put together a useful list of the best Amharic keyboards available online, on websites and on apps. You can check out our article Typing in Amharic: The Best Online Keyboards and Apps.

For those who want to study offline or do some writing practice, some Amharic alphabet tracing worksheets will come in handy.

You can download the first page of our Amharic Alphabet Tracing Pack here: 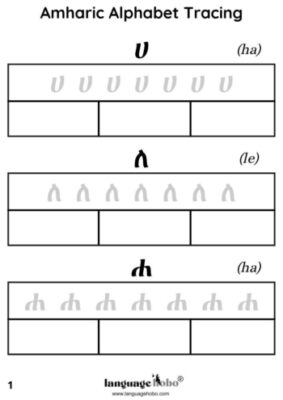 Or get the full pack with 34 letters on Etsy: 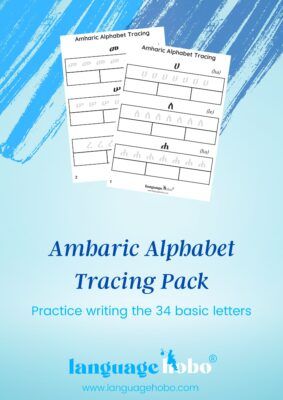 That’s all we’ve got for now, folks! If you want to learn some common Amharic vocabulary, why not head over to our post Greetings and Salutations in Amharic or How Do You Say This in Amharic? Common Words and Phrases.