Greetings And Salutations In Amharic

In Amharic, there are many different greetings and salutations which can be used in a variety of situations. Learning these greetings is an essential part of learning the language, as they are used often in everyday conversation.

It makes sense, then, to learn how to greet people properly, say goodbye, and ask how they’re doing at the start of your language learning journey. Not only will you be able to communicate on a basic level with native speakers in Ethiopia, but you’ll also make a good impression by using the correct form of greeting for each situation.

This article will introduce you to the most common greetings used in Amharic, when to use them, and how to reply. Each word will also be accompanied by its phonetic spelling so that you can pronounce it correctly.

How to say “hello/hi” in (Ethiopian) Amharic

There are several ways to say “hello” in Amharic, as you might expect. They usually depend on the situation, the person to whom the greeting is directed, and what sentiment you wish to express.

The most common way to say “hello” in Amharic is ሰላም (selam), which is considered a relatively informal greeting.

Another informal greeting used in Ethiopia is ታዲያስ (tadias), which means “hi” in English.

If you’re in a formal setting or you’re addressing someone who is older than you, in a position of authority, or you don’t know them very well, a more suitable hello would be ጤና ይስጥልኝ (tena yistiling). This translates to “health be with you”.

Due to the influence of English across the world, you’ll often hear people simply using “hello” and “hi” in Ethiopia, pronounced exactly as they are in English. They’re written ሄሎ and ሃይ respectively.

How to say “good morning” in (Ethiopian) Amharic

What you’ll notice in Amharic is that phrases change depending on whom they’re directed at – whether male or female.

The general way of wishing someone a good morning is እንዴት አደሩ? (endet aderu), which is usually directed at groups, and loosely translated means “how was your night?”

How to say “good afternoon/day” in Amharic

For a general afternoon greeting that’s directed at everyone, including more than one person, you can simply say እንዴት ዋሉ (endet walu), which means “how’s it going?” 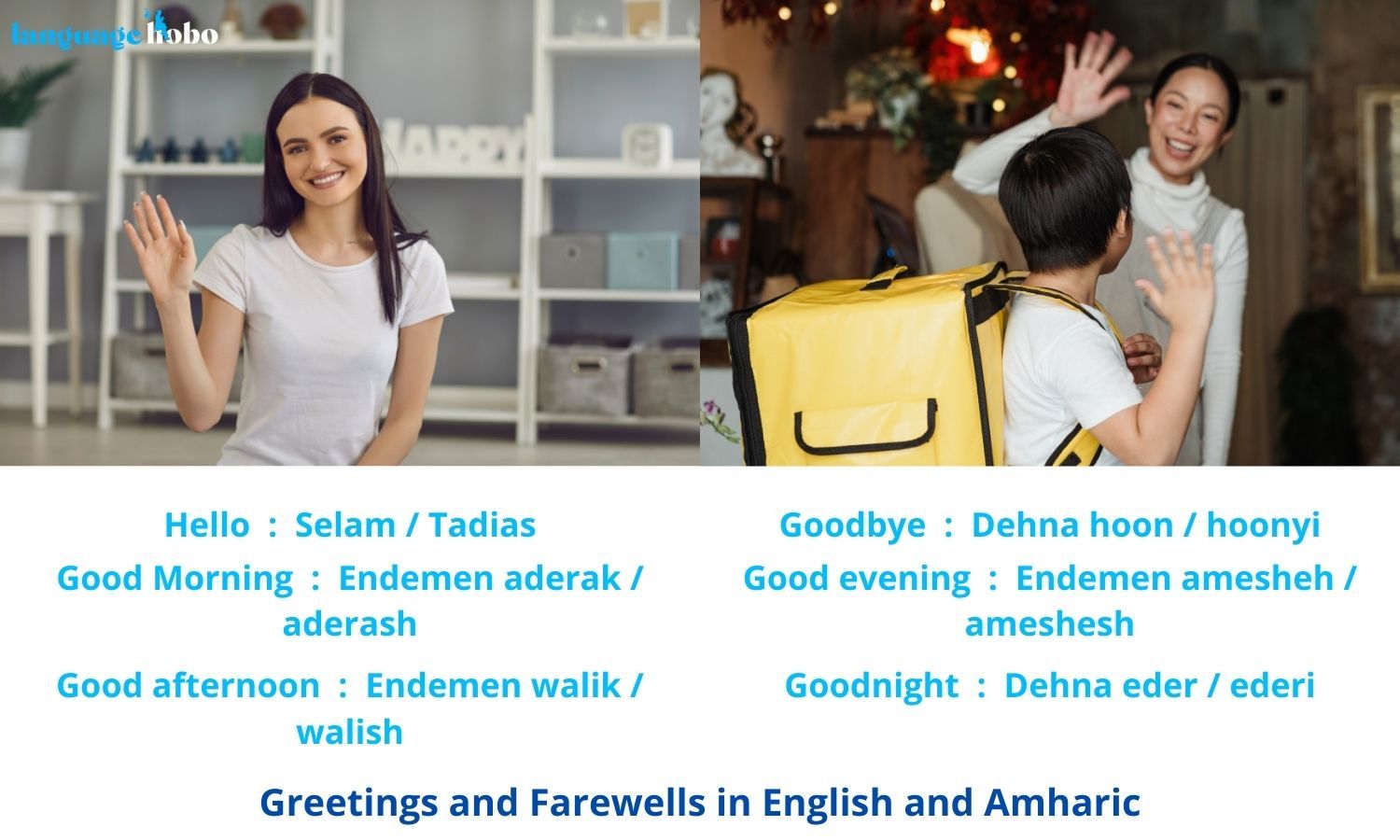 How to say “good evening” in Amharic

The way to say “good evening” in Amharic will, once again, depend on the person you’re addressing.

If you want to say “good evening” to a group of people, you’d use እንዴት አመሹ (endet ameshu).

How to say “goodnight” in Amharic

For a general “goodnight” that’s a little more formal and also used when addressing more than one person, you would use ደህና እደሩ (dehna ederu).

An alternative way of saying it is መልካም ሌሊት (melkam lelit), which works for everyone.

How to say “goodbye” in Amharic

Oftentimes, while you’re in Ethiopia, you’ll also hear people using ቻው (chaw), which has been adopted into Amharic from Italian (ciao). It’s used informally and can be directed at both males and females.

As in English, it’s common to ask someone how they are, once the initial greetings have been exchanged. You should be prepared to both say this and hear it when you’re in Ethiopia.

How to say “how are you?” in Amharic

When you want to ask someone how they’re doing in Amharic, you would usually use እንዴት ነህ (endet neh), which is directed at males, and እንዴት ነሽ (endet nesh), which is for females.

If you’re addressing a group, you would use እንዴት ናችሁ? (endet nachu?).

There are some other ways to ask this which have roughly the same meaning and can be used interchangeably. One might say እንዴት ከረምህ? (endet kirimh?), which translates to “how have you been?” Or you could say ኑሮ እንዴት ነው? (nuro endet naw?), which means “how’s life?”

An additional way to ask the same question would be ሁሉ ነገር እንዴት ነው? (hulu negar endet naw?), which can be translated to “how’s everything?”

Saying “hello, how are you?” in Amharic

Of course, you’ll want to respond to tell them you’re fine (if you are), in which case you’d use ደህና ነኝ (dehna nen).

Watch the short video below to hear pronunciations.

We hope you’ve enjoyed this quick lesson on greetings and salutations in Amharic. Learning even just a few of these phrases will go a long way in helping you feel more at ease when traveling to or living in Ethiopia.

You should be aware that, depending on where you are in the country, you might hear some slight variations in the way these phrases are pronounced or used. And in some cases, you might even hear different words altogether.

However, for the most part, the greetings and farewells covered in this article should be understood by everyone who speaks Amharic. So go ahead and start practicing them today!

And if you want to learn some more basic Amharic vocabulary, why not check out our post How Do You Say This in Amharic? Common Words and Phrases or Numbers and Counting in Amharic to learn how to count in the language? Or maybe peruse our list of love quotes in Amharic.