Numbers And Counting In Amharic

Numbers make the world go round! It’s important to learn how to count and use numbers in any new language you’re learning, and Amharic is no exception.

You’re going to encounter numbers in all sorts of situations, in all their many forms, whether you’re buying groceries, telling the time, or asking for directions. Thus, it’s essential that you learn them as early as possible and don’t leave them to the last minute.

We get it, though. They’re a real drag! Learning numbers can be monotonous and repetitive, but we promise that once you get the hang of them it’ll all be worth it.

In this guide, we’ve broken them into different topics so you can take your time and focus on the ones that are most relevant to you first. As Amharic uses an entirely different writing system than English, we’ve also included transliteration for every word or phrase to help you pronounce them. 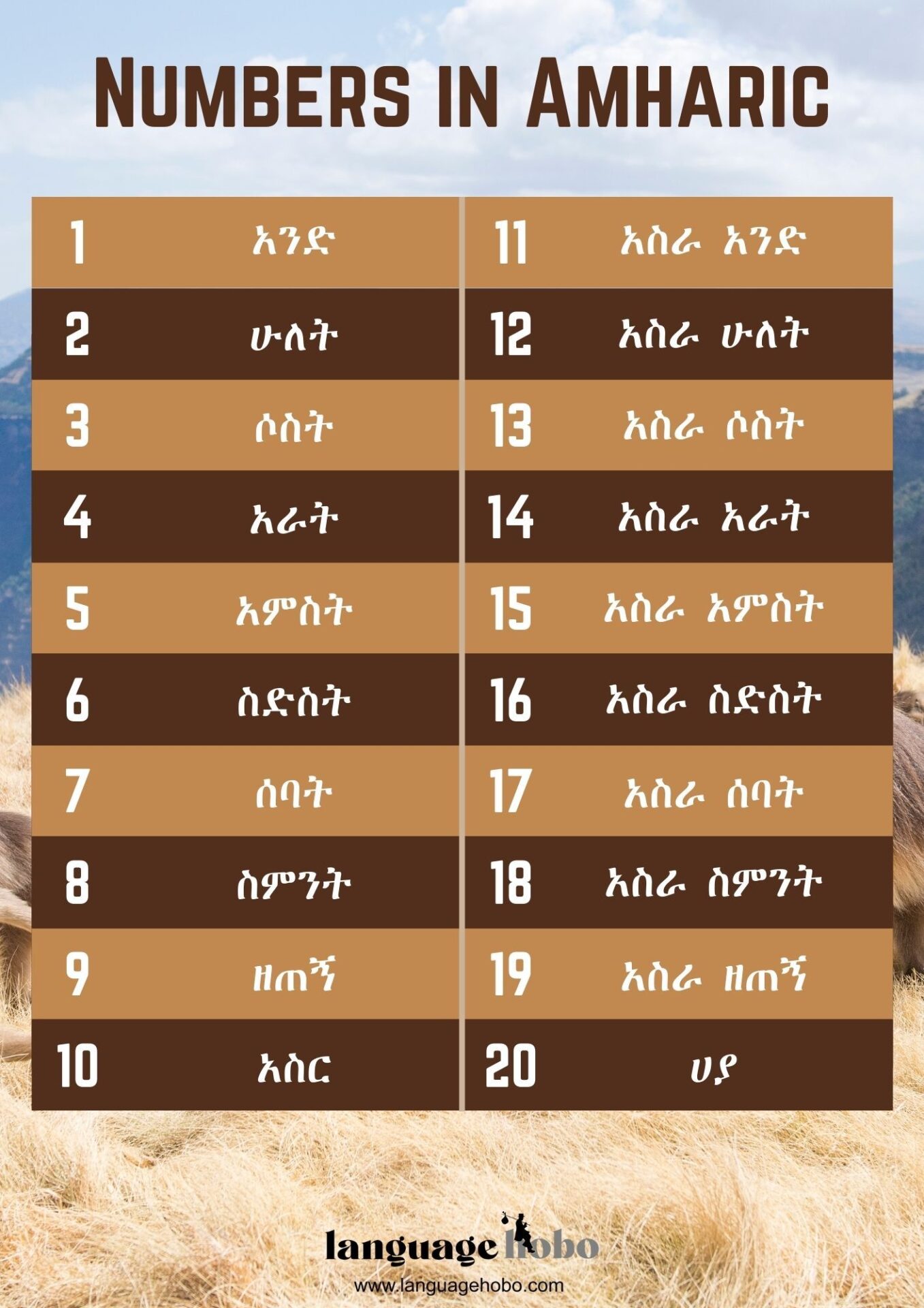 Cardinal numbers are the numbers that we use for counting, such as one, two, three, etc. They are the most basic form that numbers take, and are most often used when talking about quantity.

In Amharic, cardinal numbers are relatively straightforward, particularly once you’ve learned numbers 1 – 10. The “teens” (11 – 19) are easily formed by taking አስራ (“asir”) – a form of the number 10 – and placing it before the single digit.

Multiples of ten with single digits work the same way, so once you learn them, you can easily put them together to create any number up to 100. For example, 75 would be ሰባ አምስት (“seba amist”) or “70 5” in English.

Okay, so you know how we said that cardinal numbers in Amharic were straightforward? Well, we weren’t being entirely honest…

It just so happens that Amharic, staying true to its ancient roots, actually has its own unique way of representing numbers. This system is called the “Ge’ez numerals”.

Although the numerals you’re used to (1, 2, 3, etc.) are often used in and around Ethiopia, and Amharic speakers know and understand them, the Ge’ez numerals are still used in places like restaurants and institutions. So, it would be wise to learn them.

They’re not too complicated; there are no unique numerals for numbers over 100, and teens are formed by using the numeral for 10 + a single-digit numeral. Have a look at the table below to see how it all works.

Ordinal numbers are the numbers we use to denote order or rank in a sequence, such as first, second, third, etc.

Fractions are the numbers that we use to represent a part of a whole, such as 1/2, 1/3, 2/3, etc. These are important to learn for situations when you need to discuss things like weight, measurements, or time.

A couple of these should look familiar, as you already came across them in the ordinal numbers section.

Forming multiplicative adjectives in Amharic is pretty easy as, from “three times” onwards, there’s a simple pattern the rest of the numbers follow. The word ጊዜ (“gizee”) is added after the cardinal number.

For example, “six times” would be ስድስት ጊዜ (“sidist gizee“).

Age is always an interesting topic and one that is among the first things that people learn about when studying a new language. Knowing how to ask someone’s age, as well as how to say your own, will definitely come in handy.

In Amharic, the way you tell someone your age is a little different from what you might be used to, though it’s still really simple. You say the number (cardinal) first, followed by “I am”. See for yourself below.

Telling time is an important skill to learn in any language, though it isn’t always the easiest to master. This is especially true of Amharic, which like many East African languages, uses a particular method that’s alien to us here in the West.

We won’t go into that here, as we’re more concerned with how numbers are used in relation to the time.

You’d be surprised how straightforward things are once you understand the basics. Amharic doesn’t overcomplicate things by throwing in unnecessary words. You simply say “number” + “clock” and “it is”.

(For more on how to tell the time in Amharic, be sure to check out our article Days of the Week, Months of the Year, Seasons, Weather, and Time in Amharic.)

The Date in Amharic

Saying the date in Amharic is also not too complicated. As with most sentences involving numbers, the cardinal number is used here, even though we usually use ordinal numbers when referring to dates in English.

The sentence structure is a little strange, but nothing you can’t handle. “Today” + “month” + “number” + “it is”. Check it out in the table below.

We hope this short guide didn’t confuse you too much! Numbers are an essential part of any language, but they don’t have to be difficult.

Just take your time, and soon you’ll be able to count just like a native Amharic speaker!

If you’re ready to learn more, why not check out our Amharic resource page, where you can find all sorts of helpful materials to assist you on your language-learning journey. Or how about learning how to greet people in Amharic?