At some point along your language learning journey, you’re going to need a good English-Amharic dictionary. This is true whether you’re a beginner just starting to learn the basics, or an advanced learner working on perfecting your Amharic skills.

The best English – Amharic dictionaries offer a variety of features that make them useful for both native speakers and learners of the language.

The good news is that there are plenty of great options out there, in a variety of different formats. Depending on your needs, you can choose from online dictionaries, apps, good old-fashioned books, or maybe even use a combination of all three to get the most comprehensive coverage.

Because we know how much of a chore it can be to wade through all the different options, we’ve put together a list of our top picks for the best English-Amharic dictionaries, in all their different forms.

The first type of dictionary on our list is the physical, or book, dictionary. While it might seem old-fashioned in today’s digital world, there are advantages to using a physical Amharic dictionary.

For starters, you can write in the margins and underline Amharic words and phrases, which can be really helpful for vocabulary-building.

Plus, there’s scientific evidence to suggest that we retain more information when we read something in printed form, as opposed to on a screen. So if you want a dictionary that will help you learn and remember new words, a physical one might be the way to go. 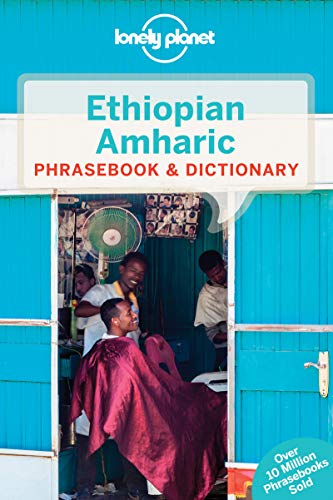 If you’re looking to learn some essential phrases for Ethiopian Amharic, then the Lonely Planet Phrasebook & Dictionary is exactly what you need. With easy-to-follow guides and practical tips, you’ll be able to order food, ask for directions, and more, with ease.

Plus, with a user-friendly layout and handy shortcuts, you’ll be able to find the information you need quickly and easily. The phrasebook also comes with a useful Q&A section, which covers common questions and provides suggested answers.

Though this is more phrasebook than concise dictionary, we recommend it for looking up commonly-used words and phrases. 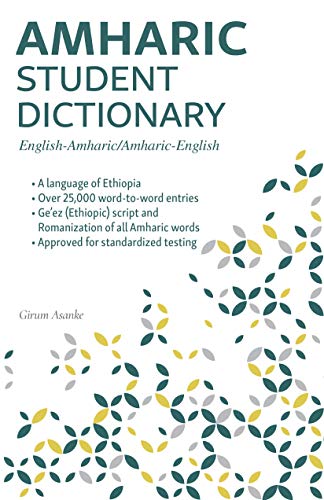 The dictionary includes 26,000 entries, so you can be sure to find the word you’re looking for. And thanks to the two-way format, you can look up words in both Amharic and English, which is a necessity for a language like Amharic that uses a wholly foreign script.

Text is, thankfully, in both the Ge’ez script and Latin alphabet, meaning that even if you can’t yet read Ge’ez, you’ll be able to pronounce the words correctly.

This dictionary is also useful for Amharic native ESL students who are studying English as a foreign language.

As an intermediate-level dictionary, we think this one would be great for students, professionals, or anyone who needs a reference guide for this fascinating language, as it’s relatively easy to use and compact enough to keep handy. 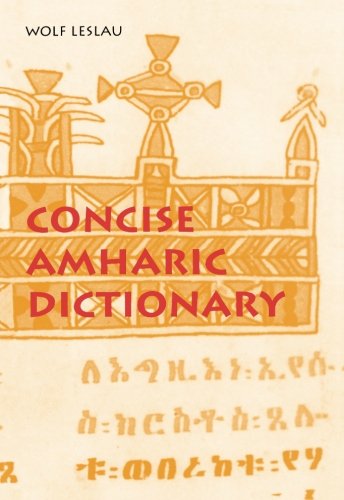 When it comes to having a reliable and comprehensive dictionary for the Amharic language, Wolf Leslau’s Concise Amharic Dictionary is by far the best.

Published by The University of California, this dictionary is designed to help those who are unfamiliar with the Amharic script by providing a clear and concise reference guide.

What makes this dictionary stand out from others is its focus on modern Amharic usage, including idioms and slang, making it an invaluable resource for students and veterans alike.

Highlights include romanizations to help with pronunciation, a readable Amharic text, and alphabet letters that are grouped by sound rather than letter order. This makes it much easier to find words, even if you don’t know the exact spelling.

The Concise Amharic Dictionary is a great choice for anyone seeking an authoritative and user-friendly reference guide.

For a more modern option, online Amharic dictionaries are the way to go.

Online dictionaries are websites that offer a searchable database of words and definitions. They have the advantage of being constantly updated with new words and phrases, so you can be sure you’re getting the most accurate information possible.

They also often have features that physical dictionaries don’t, like the ability to hear audio pronunciations of words, or the opportunity to click on related words and phrases. A godsend for those unfamiliar with how the Ge’ez script should be read.

And because they’re online, you can usually access them from anywhere, which is great if you need a quick translation on the go.

Abyssinica Dictionary is a user-friendly online dictionary specifically for the Amharic language. It contains over 400,000 entries, and also includes features such as an online translator, a text-to-speech tool (though this is atrocious, so don’t expect good results), and a search engine that allows you to search in Amharic.

In addition, it provides helpful images to accompany the words you look up, though sadly no Romanized transliteration to help with pronunciation.

Abyssinica Dictionary also translates Amharic to and from other languages such as German, Spanish, and French. 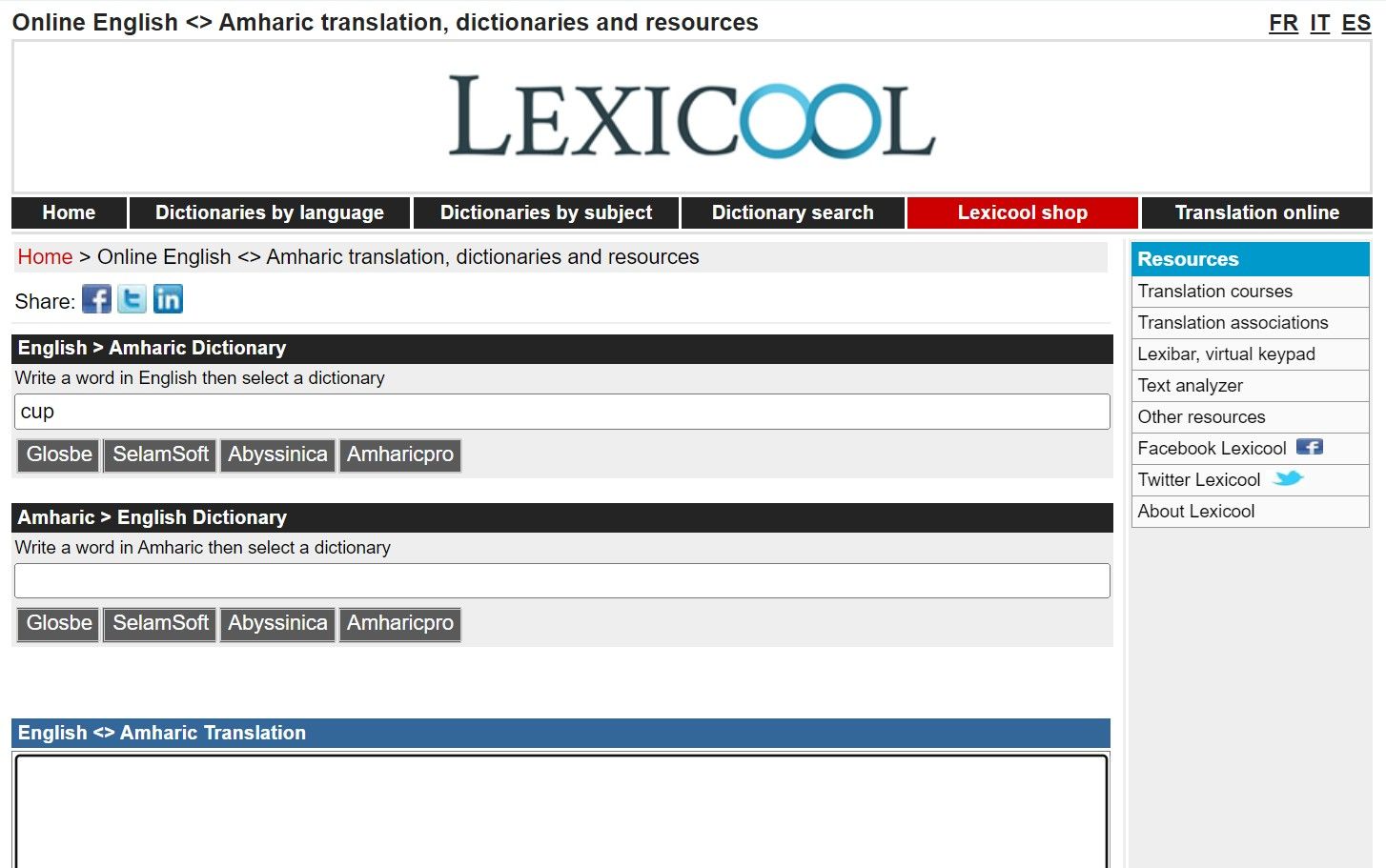 The Lexicool dictionary site is a convenient, fast, and easy-to-use platform that combines all of the top Amharic web dictionaries (Glosbe, SelamSoft, Abyssinica, and AmharicPro) on one platform.

With that, you’re able to choose from which dictionary you want to search, giving you the ability to cross-reference meanings.

Results, however, won’t be displayed on the Lexicool site. Instead, you’ll be taken to the original site where the definition is located.

This is a great tool, especially if you want to double-check your results and get more accurate definitions.

Some dictionary apps also include other helpful features, like grammar guides and quizzes to help you learn new Amharic words. The best part is that most can be used offline.

The following Amharic dictionary apps are completely free to download and use (though are ad-supported) and work on either Android, iOS, or both. 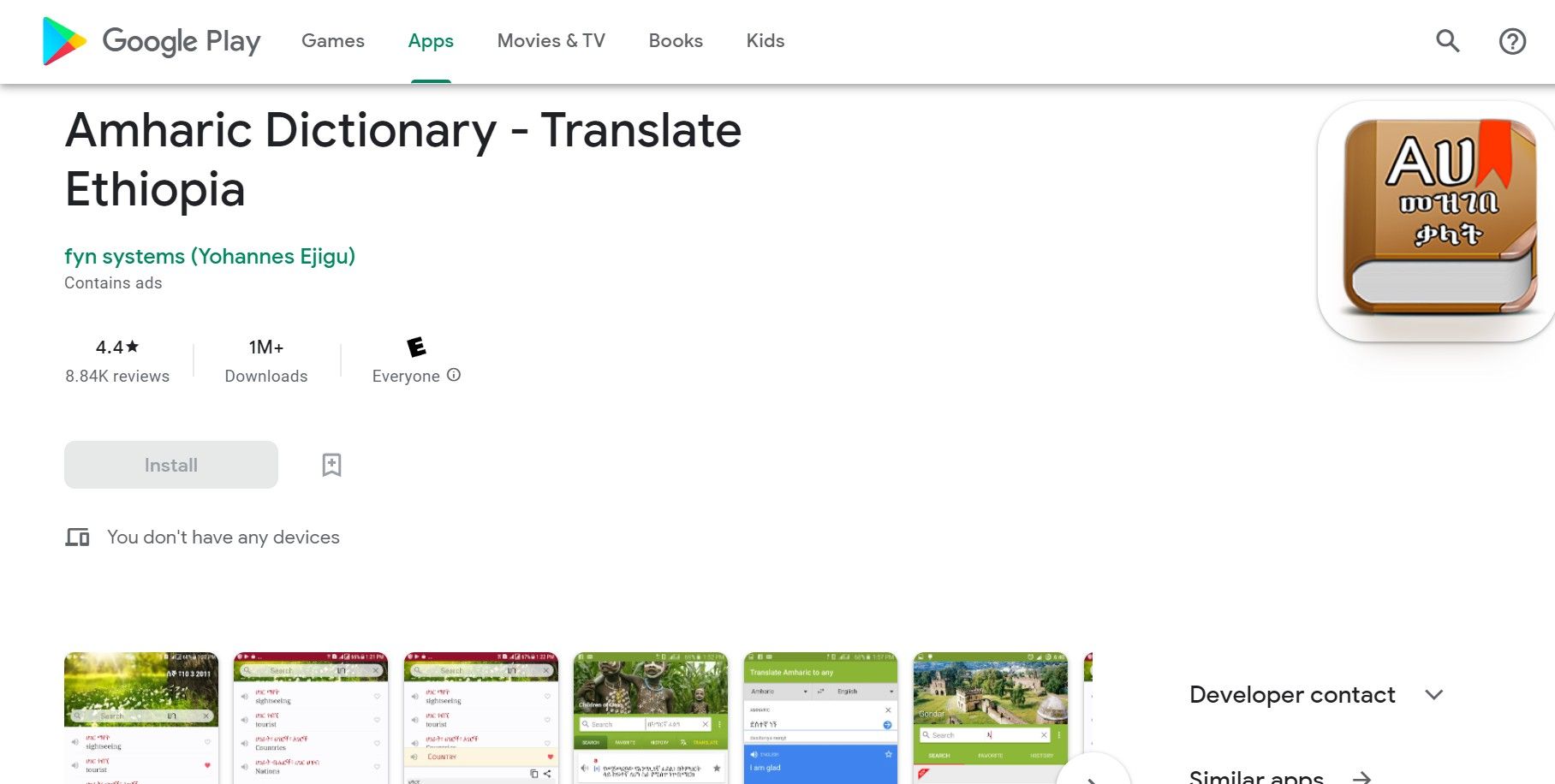 The Amharic Dictionary – Translate Ethiopia app is a handy tool for all learners of Amharic, whether beginners or more advanced.

The app features a built-in Amharic keyboard for easy searching in both English and Amharic, as well as Romanized translations of words to aid in pronunciation.

Over 60,000 words are included in the dictionary, with new ones added regularly. While ads do show up often, this is par for the course with free apps.

Like almost all foreign language dictionary apps, the audio feature is unfortunately only available in English, but this does not take away from the usefulness of the app as a whole.

You’ll be able to save words to your favorites list as well as browse through recent words that you’ve looked up. What’s more, this English-Amharic dictionary works offline.

Available only on Android, the Amharic Dictionary – Translate Ethiopia app is a must-have for anyone studying Amharic. 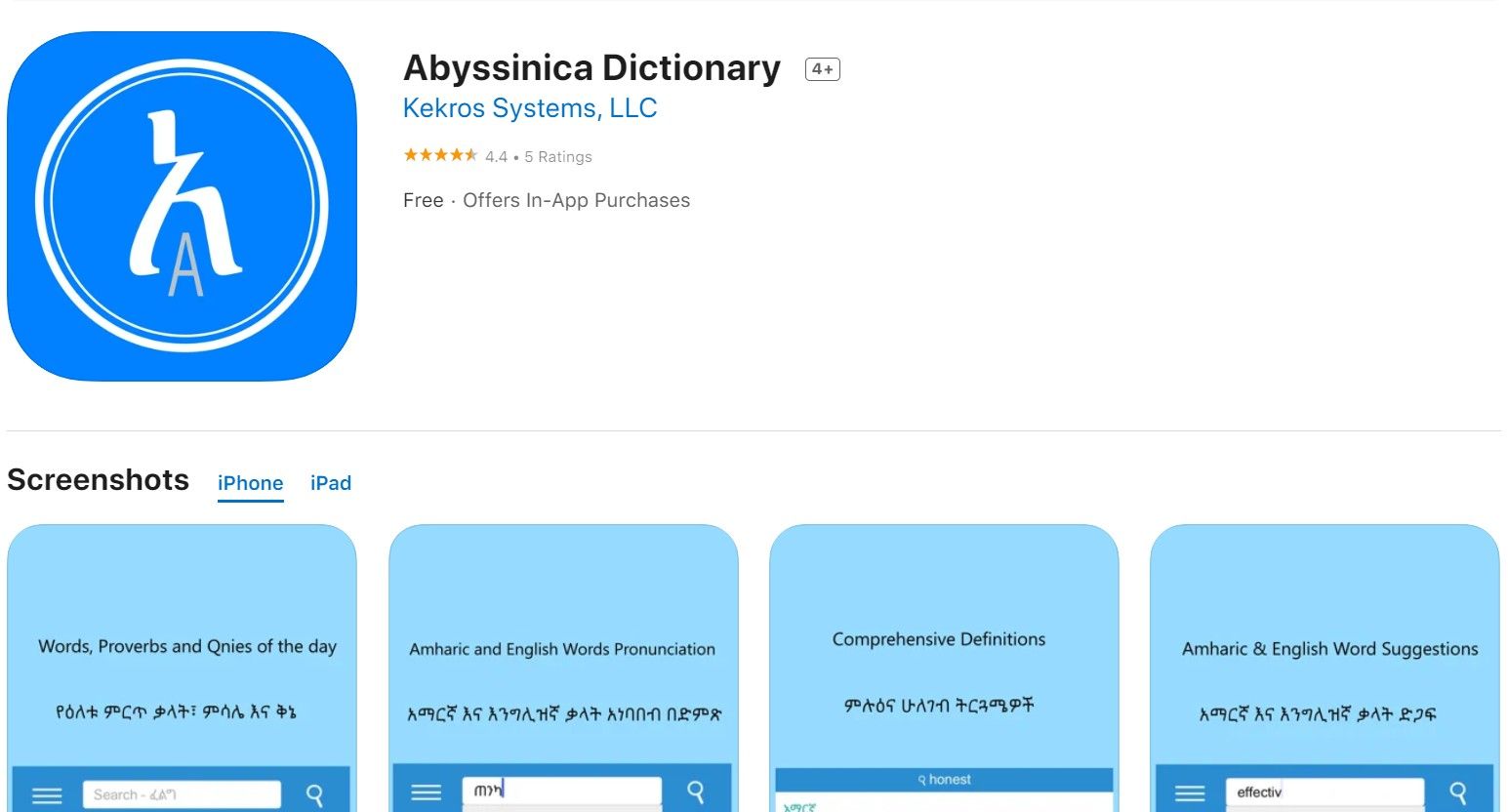 You won’t find a more comprehensive Amharic-English dictionary than the Abyssinica Dictionary app. With over 400,000 multi-language definitions, there won’t be a word you can’t find.

There’s a built-in Wikipedia feature that brings up additional information about the words you search, providing detailed explanations in both English and Amharic. This is handy for getting a better understanding of words and their usage.

You’ll even get “Word of the Day” notifications, so you can learn something new every day.

It should be noted that, although there are additional features such as Amharic audio pronunciation, Amharic proverbs, and removal of ads, these aren’t free – you’ll need to make an in-app purchase to access them. The audio pronunciation add-on is cheap as chips, however, at just $3.49.

Sadly, just like the web version, they don’t include Romanization to help with pronunciation, so you’re kinda left in the dark if you don’t purchase the audio add-on.

If you’re looking for an Amharic dictionary that works on both iOS and Android and can be used offline, then Abyssinica Dictionary is right up your alley.

Despite the relatively large number of speakers, Amharic isn’t a commonly studied language, and thus, there aren’t a ton of dictionaries available.

We believe we’ve chosen the best of the bunch, in both physical and digital forms. However, we would love to hear your thoughts – let us know in the comments if you have any suggestions!

As a serious language learner, you’re going to have to bite the bullet and invest in a good Amharic dictionary. We recommend having an app-based one and a physical one on hand at all times.