Is Amharic A Hard Or Easy Language To Learn?

Table of Contents show
1 Amharic comes from a different language family than English
1.1 Why is this important?
2 You won’t be able to rely on cognates
3 Amharic isn’t written in the Latin alphabet
3.1 Why is it important to be able to read in your target language?
4 Amharic has clicks
5 Amharic has a different word order than English
6 Amharic has gendered nouns
7 There’s a lack of resources to learn Amharic
8 Not always a consensus on spelling

When deciding which language to learn, one of the key factors to consider is how difficult the language is to master.

For many people, the thought of learning a new language can be daunting, and they want to know that they’ll be able to make progress quickly. And quick progress is essentially what keeps people motivated in the long term.

What makes a language easy or difficult to learn depends on several factors, including its grammar, writing system, and similarity to other languages you already know.

Amharic, the official language of Ethiopia, is therefore considered a difficult language for English speakers and speakers of European languages to learn. But what makes it so? That’s what we’ll discuss in this article.

Amharic comes from a different language family than English

The Amharic language belongs to the Semitic branch of the Afro-Asiatic language family, which includes Hebrew, Arabic, and Aramaic. English, on the other hand, is a Germanic language with strong Latin roots and has no relation to Amharic whatsoever.

Why is this important?

Well, because it means that the two languages don’t share any common grammar rules or vocabulary. And this in turn means that everything will be brand new and extremely foreign to a speaker of solely European languages.

Aside from the modern terms for technology that have been borrowed from English, there is very little common vocabulary between Amharic and English.

You won’t be able to rely on cognates

Continuing on from the previous point, because Amharic and English are from completely different language families, you can’t rely on cognates to help you guess the meaning of words.

Cognates are words that have a common etymological origin and therefore tend to look the same and have similar meanings, even if they’re pronounced differently.

This won’t be the case with Amharic. And because of this, Amharic words will be more difficult to remember. 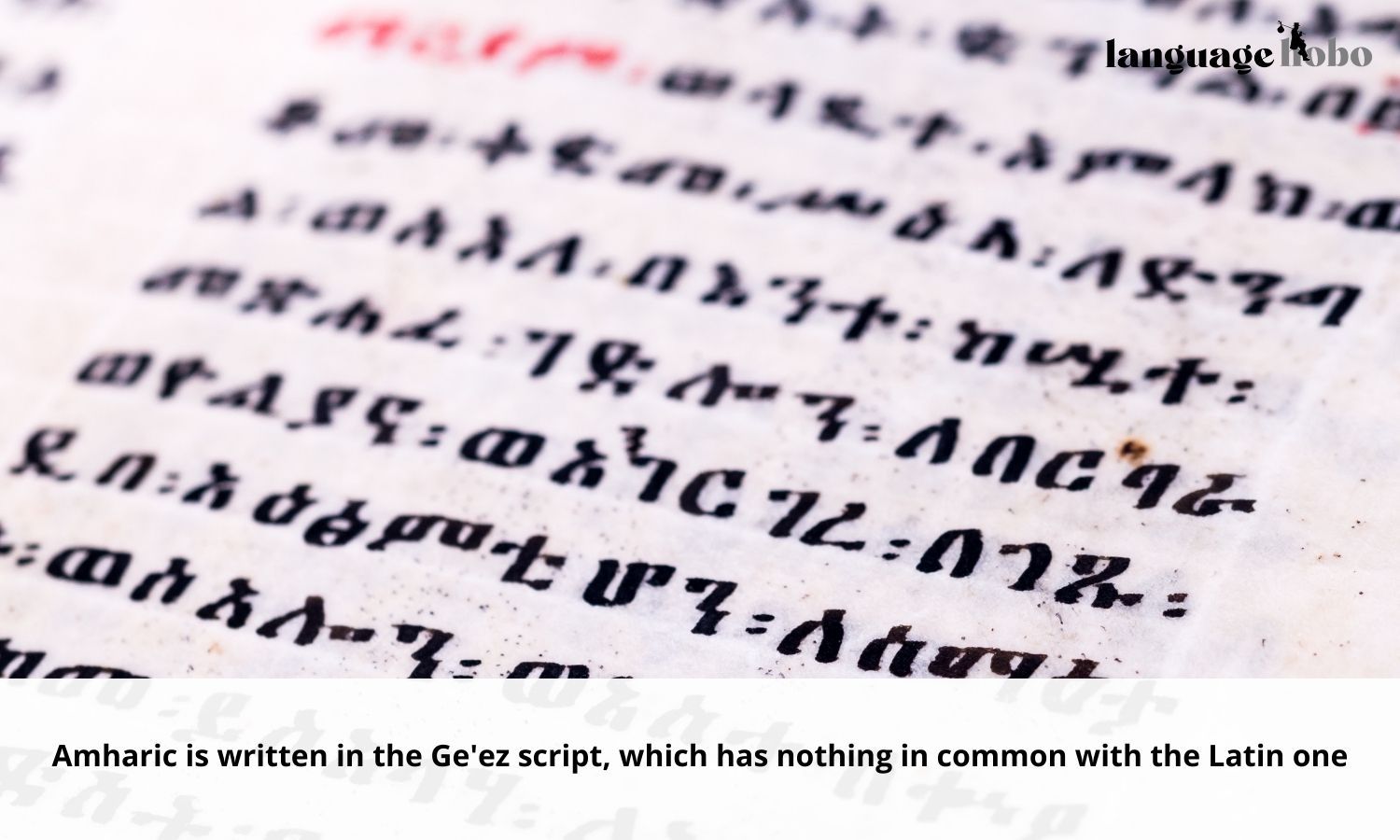 If you’re used to languages that are written in the Latin alphabet, Amharic will be a bit of a shock. The Amharic writing system is based on the Ge’ez script, which is one of the oldest writing systems in the world.

This means that you’ll have to learn an entirely new alphabet before you can even start reading and writing in Amharic, something that wouldn’t be a huge problem if said alphabet (or “abugida”, as it’s called) didn’t consist of over 300 characters!

(You can learn more about the Amharic alphabet here.)

Why is it important to be able to read in your target language?

Not only does reading give you a better understanding of the grammar and vocabulary, but it also allows you to pick up new words and phrases more easily.

Additionally, it’s generally more motivating to be able to read in your target language than it is to only be able to speak it.

You’ll feel more immersed in the language and will understand more of what’s going on around you, especially if you’re visiting Ethiopia, where the Amharic alphabet is widely used in printed media, road signs, etc.

One of the things that makes Amharic a difficult language for speakers of non-African languages is the fact that it has clicks. Clicks are consonant sounds that are made by pressing your tongue against the teeth or the roof of your mouth and then releasing it suddenly.

While Amharic’s clicks aren’t as pronounced or as numerous as those in some of the southern African languages (Xhosa, we’re looking at you), they’re still present and can be quite difficult to get used to for speakers of European languages.

Not clicking a consonant when you’re supposed to will change the letter and can thus change the meaning of a word, so it’s important to get them right.

Amharic has a different word order than English

The usual word order of Amharic is Subject-Object-Verb (SOV). However, if the object is more important than the subject, the order becomes Object-Subject-Verb (OSV).

This can be confusing for speakers of languages with a Subject-Verb-Object (SVO) word order, such as English, as it’s not always immediately clear what the subject and object of a sentence are.

It can also be difficult to remember which word order to use in which situation.

Learn more about the Amharic syntax.

This won’t be difficult to grasp if you’re already familiar with languages that have gendered nouns, such as French, Spanish, or German.

In Amharic, nouns are either masculine or feminine, though thankfully, most of these gender distinctions correspond to the physical gender of the noun’s referent. Where an inanimate object is concerned, its gender is more often than not masculine.

What makes things complicated for a learner is the variations you’d need to learn when speaking to different people. For example, if you wanted to say “welcome” to someone in Amharic, this would change depending on whom you’re addressing:

And that’s just the genders. The construction can also change depending on the number of people or the age of the person who’s being addressed.

There’s a lack of resources to learn Amharic 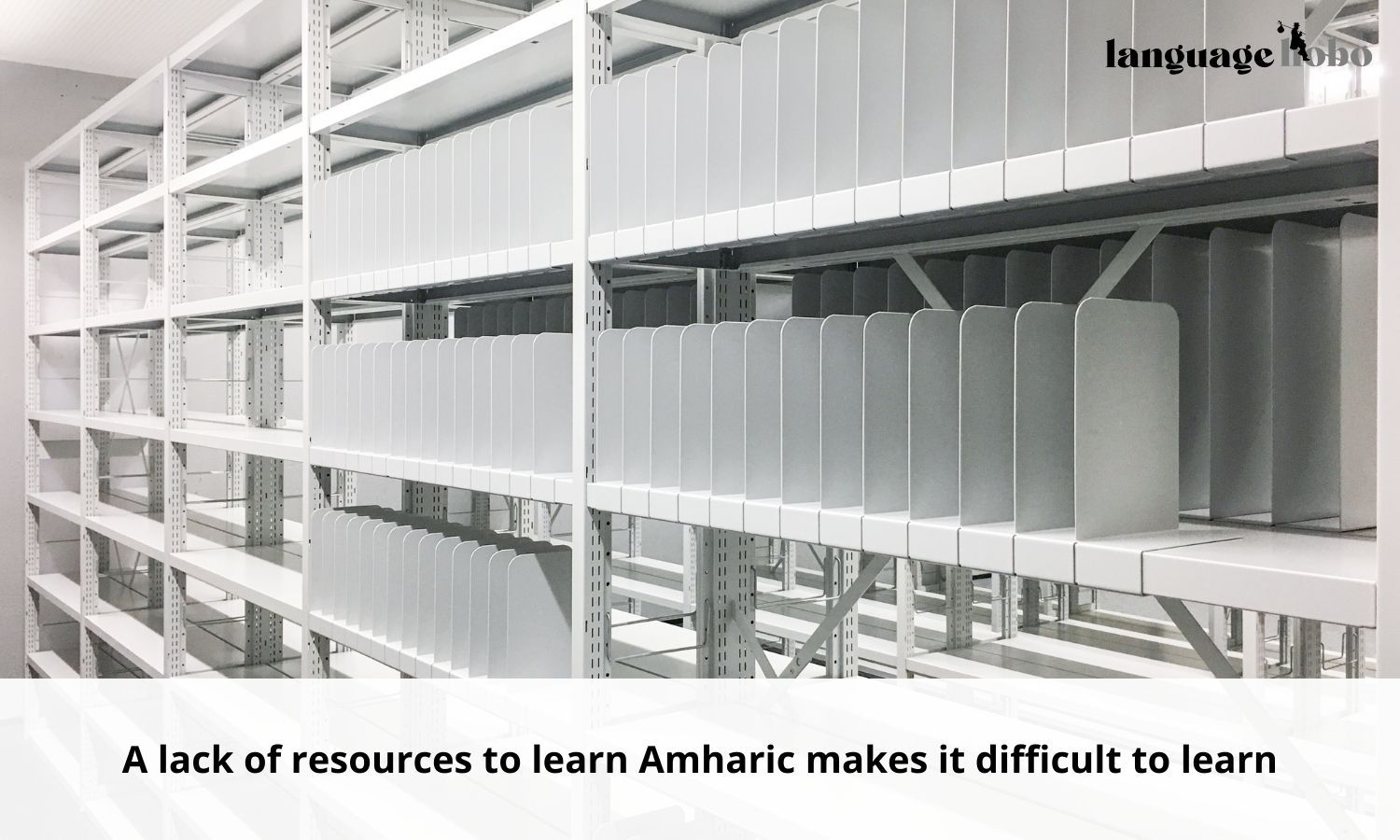 Naturally, the availability (or lack thereof) of resources to learn Amharic will greatly affect how easily you pick up the language. Diversity of resources is always important when learning any language, but it’s especially crucial when learning a less commonly taught language like Amharic.

Though there’s plenty of Amharic content available for native speakers, and although there are more courses and resources for it than many other African languages, they’re still limited.

Even accessing novels and children’s books in the Amharic language can be difficult, as they’re often not available outside of Ethiopia.

This lack of resources means that practicing your language skills will be tough.

Not always a consensus on spelling

When learning Amharic, you’ll quickly find that there’s not always a consensus on how words should be spelled. This is due to how the alphabet operates, where, depending on personal preference or how a word is pronounced, some might decide to spell it with a letter that has a similar sound.

Take a look at the word “Friday”:

These words are pronounced the same and mean the same thing. You’ll see things like this often in Amharic, where there are multiple ways to spell a single word. We liken it to how in British English, we put a “u” in many words that the Americans do not.

These are just some of the things that contribute to Amharic being a difficult language to learn. None of this should deter you, however. Because the truth of the matter is that Amharic is no more difficult than any other language. It’s all a matter of perspective.

Amharic could be the easiest language in the world… if you love it or you have a strong motivation for learning it. If Amharic becomes your obsession, all of the aspects that make it “difficult” will simply make it more endearing to you.

Anything you enjoy doing will never feel like a chore, and language learning is no different. So, if you’re passionate about learning Amharic, then go for it!

Read about the most effective way to learn Amharic fast.

Wanna learn some useful Amharic vocabulary? Check out our posts Days of the Week, Months of the Year, Seasons, Weather, and Time in Amharic or How Do You Say This in Amharic? Common Words and Phrases.