How Long Does It Take To Learn Amharic?

Table of Contents show
1 Your native language: how similar is English to Amharic?
2 Your previous exposure to Amharic (if any)
3 Your learning style
4 How much time you can dedicate to studying Amharic
5 Your motivation for learning Amharic
6 Your memory
7 Access to a variety of Amharic-language resources
8 Native Amharic speakers around you
9 Your experience with language learning in general

This is a question that we get a lot here at Language Hobo. “How long does X language take to learn?” It’s a tough question to answer, and usually, the reply is some variation of “It depends.”

But what does it depend on? Well, that’s what we’ll be discussing in this article. We can tell you that, according to the Foreign Service Institute (FSI), Amharic is a category III (“hard”) language.

This means that it will take English speakers roughly 1100 hours (or around 2 years) of dedicated study to learn Amharic to a “professional” level.

This is, of course, a rough estimate. How long it actually takes you to learn Amharic will depend on a variety of factors, 9 of which we’ll consider below.

Your native language: how similar is English to Amharic?

If your native language is English or any other European language, Amharic is going to take quite a bit longer to grasp than it would if you spoke another Semitic language like Hebrew or Arabic.

This is because Amharic has a very different sound and grammatical structure than most European languages. Even if you’re a language whiz, it’s going to take some time to get used to these differences.

Amharic will be completely foreign to you, not just the way it sounds but the way it looks. It uses the Ge’ez script in writing, which is completely different from the Latin alphabet that most European languages use.

Now, while there will be some modern English words that have been adopted into Amharic within the last century or so (“machine”, “passport” to name a few), the vast majority of the Amharic vocabulary is completely different from English.

Your previous exposure to Amharic (if any) 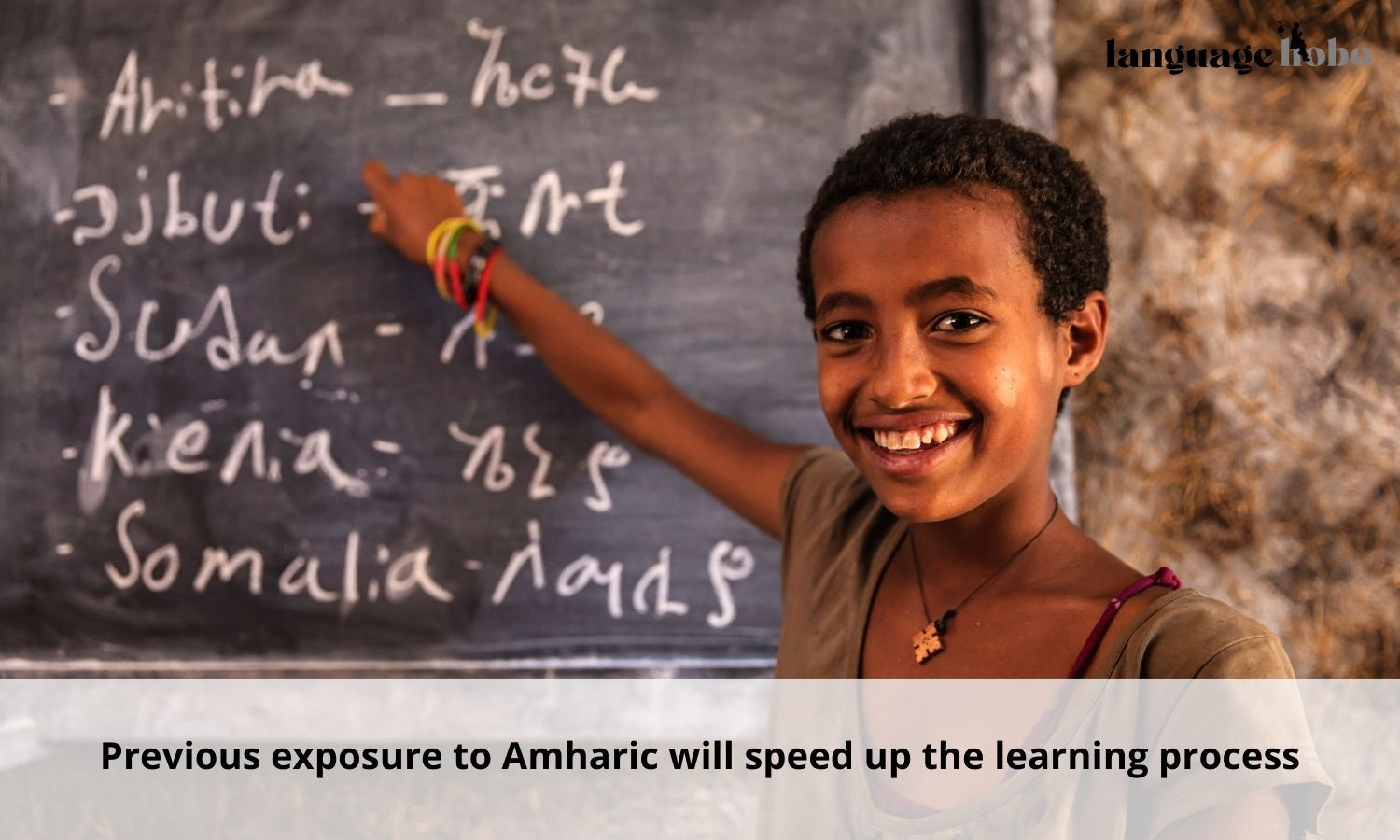 If you’ve never been exposed to Amharic before, obviously it’s going to take longer to learn than if you already have some experience with the language.

Even if you’ve only been exposed to Amharic in a limited way – say, you lived in Ethiopia for a year as a child – that will still give you a bit of a head start.

You’ll still need to put in the hard work to become fluent, but you’ll have a better foundation on which to build.

How you learn best also plays a role in how quickly you’ll be able to learn Amharic. Some people are visual learners and do best with flashcards or other visual aids.

Others are auditory learners and learn best by listening to audio recordings or speaking with natives. And still, others are kinesthetic learners, who need to get physical with their language learning and use things like gestures and body language to help them remember.

Everyone learns differently, so it’s important to find a method of learning Amharic that works best for you. The worst thing you can do is stick to an ineffective learning method just because you think that’s the way you’re supposed to learn. This will add unnecessary hours (or even years) to your language learning journey.

How much time you can dedicate to studying Amharic

This one is pretty self-explanatory. The more time you can dedicate to studying Amharic, the faster you’ll be able to learn it.

If you can only spare an hour or two a week for your Amharic studies, it’s going to take quite a bit longer than if you’re able to study for several hours every day.

With a language like Amharic, which requires hours of regular, focused study, it’s important to be honest with yourself about how much time you truly have to work on it. If you know your time’s limited, you should expect your progress to be slow (and don’t get discouraged when it is).

Your motivation for learning Amharic 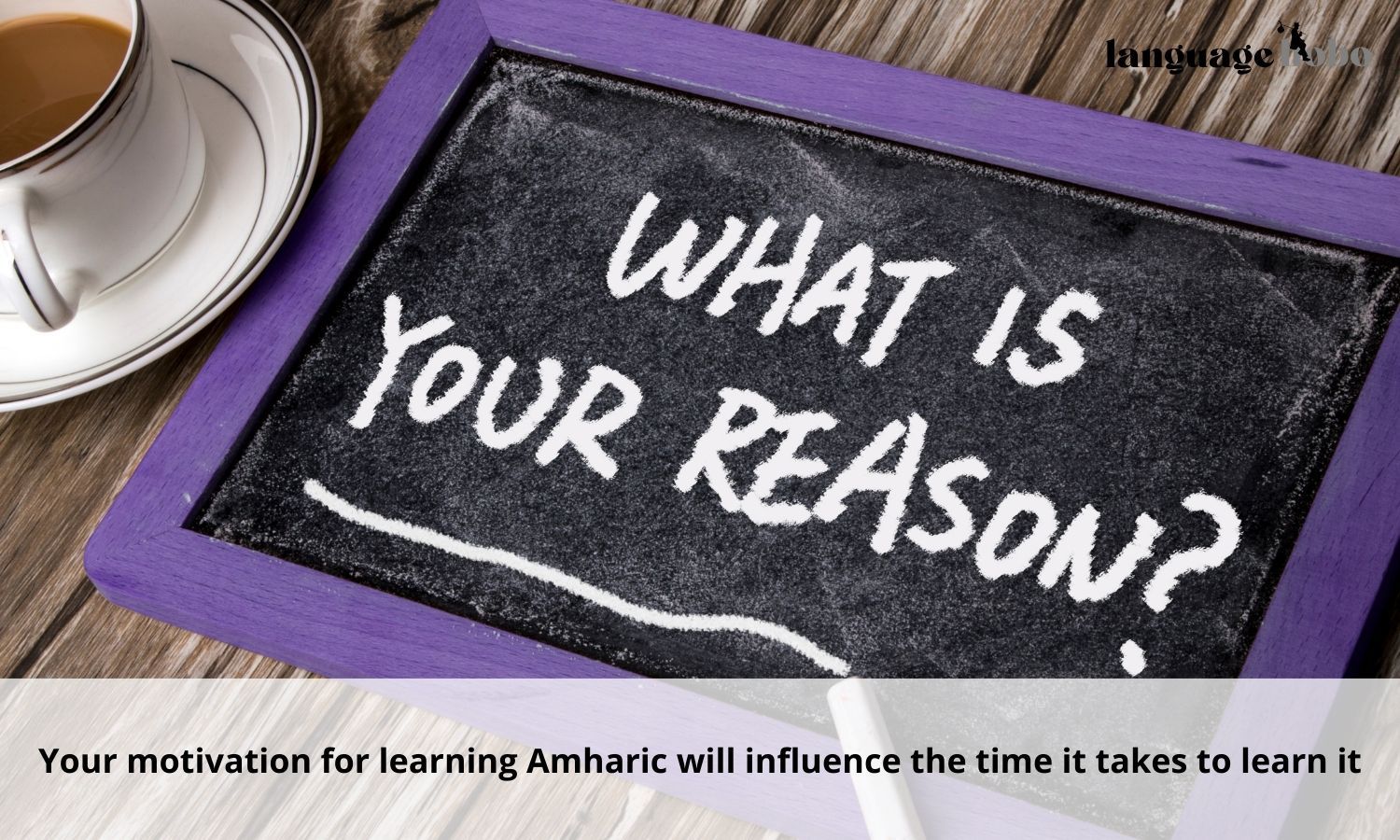 Your motivation for learning Amharic is also going to play a role in how quickly you learn the language.

While passion (or lack thereof) can and does influence the speed of language learning, it’s not the only determiner.

Some people are highly motivated to learn a language but don’t necessarily have a passion for it. They may want to learn Amharic for business reasons or because they want to be able to communicate with family members who speak the language.

Whatever your motivation for learning Amharic, it has to be strong, otherwise you’ll find yourself dragging your feet, not wanting to pick up that textbook or app, and generally not making the progress you could be.

Let’s face it, memory is a huge factor in language learning, though people don’t like to admit it.

If you have a good memory, you’ll be able to retain information more easily and thus progress more quickly. When it comes to the Amharic alphabet, for instance, a good memory will come in very handy with remembering the 300+ fidel (the Amharic letters/symbols).

Many Amharic words are also relatively long, often made up of several syllables, so being able to remember them will take longer if you have a bad memory.

(For a deeper look at how memory affects language learning, check out our post Learning a New Language With a Bad Memory.)

If you want to learn Amharic, it’s important to have access to a variety of resources in the language. The more resources you have at your disposal, the more exposure you’ll get to Amharic and the faster you’ll be able to learn it.

Some of the best resources for learning Amharic include:

Of course, not everyone has access to all of these resources. And that’s okay. The important thing is to find and make use of the resources that are available to you.

Native Amharic speakers around you 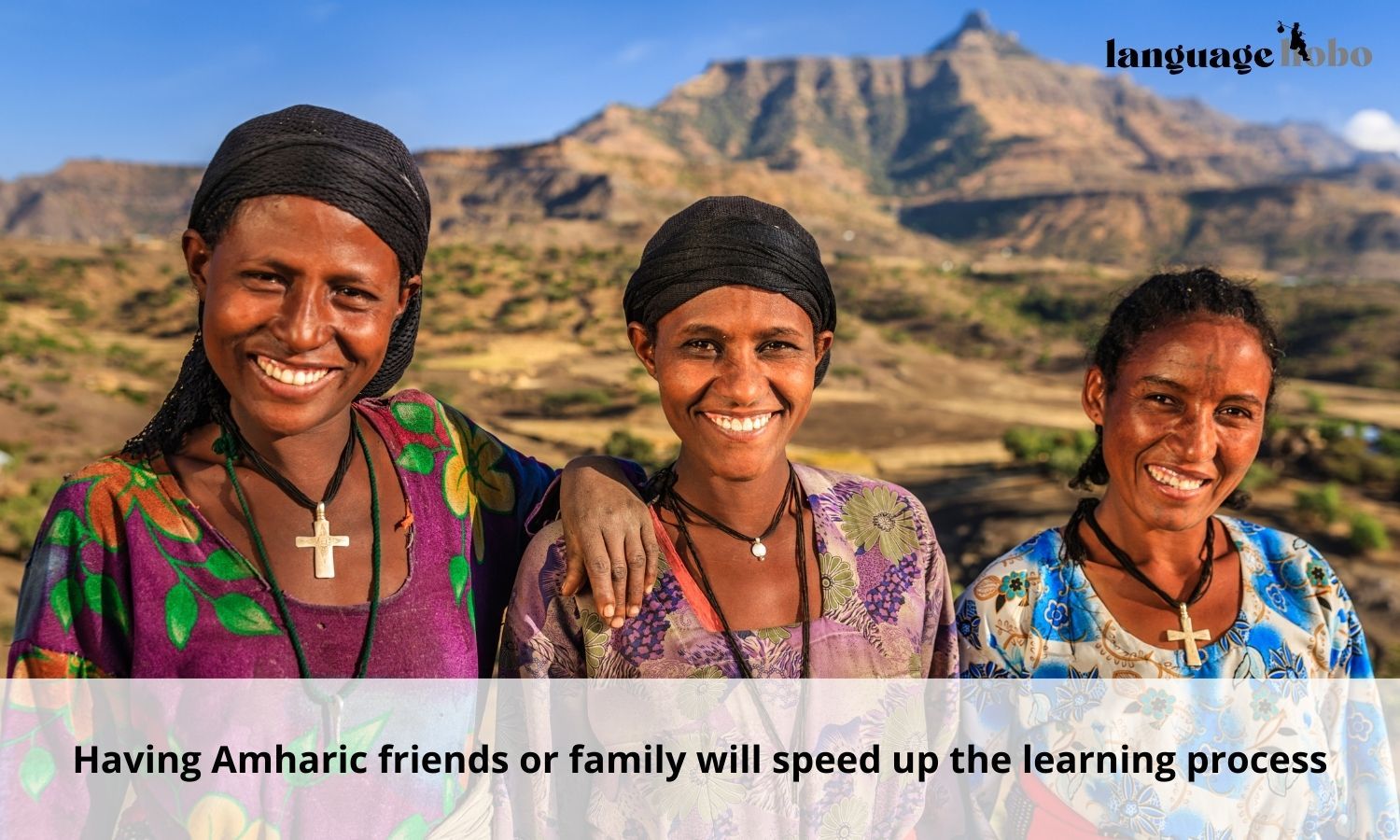 If you’re lucky enough to have friends, family members, or regular acquaintances who speak Amharic, you’re in a great position to pick up the language quickly.

Being able to practice your Amharic regularly with native speakers will help you to progress much faster than if you were only studying the language on your own.

Additionally, if you live in an area with a large Amharic-speaking community, you’ll have more opportunities to practice the language and gain exposure to it daily, which will help you to learn it more quickly.

Your experience with language learning in general

If you’re a complete beginner when it comes to learning languages, it’s going to take you longer to learn Amharic than it would for someone who is already experienced in language learning.

That’s not to say that beginners can’t learn Amharic quickly, but if you’re starting from scratch, you should expect your progress to be slower than someone who already knows a thing or two about language learning.

The reason for this is that experienced language learners already have some strategies and methods for learning that they can apply to their Amharic studies. They also tend to be more familiar with the challenges and obstacles that come with learning a new language, so they’re better equipped to deal with them.

So, how long does it take to learn Amharic?

As you can see, there are a lot of factors that come into play when trying to determine this. The truth is, it’s impossible to say for sure. But what we can say is that if you’re willing to put in the time and effort, you can learn Amharic (or any language) to fluency within a couple of years.

Ready to get started? We’ve got plenty of resources to help you learn Amharic. Check out The Best Ways to Learn Amharic for a guide on how you can get the most out of your Amharic studies.